I’ve had these 5.11 Stryke Pants for a while now, have tried and tested them and worn them every day for over a month, and yet still have found myself really struggle with formatting this review.

See, reviewing clothes and apparel on this blog is always difficult for me. In terms of reviewing apparel, I’m often in a bit of a quagmire. I won’t review something like a pair of Levi’s jeans, but I will throw tactical pants like these up on the blog. Is there a difference? I would say yes. Ultimately, I think it comes down to intent. Both your normal jeans and these Stryke Pants by 5.11 Tactical are designed to cover your legs, but one will put the emphasis on aesthetics and the other on function.

If I have to get to the crux of this review and how I feel about these pants in a single line it’s this: I think the real difference between 5.11 Stryke Pants and “regular” pants are that these are hyper functional with a strong focus on performance (rather than fashion) as a primary concern, though I do think they look pretty damn nice regardless. 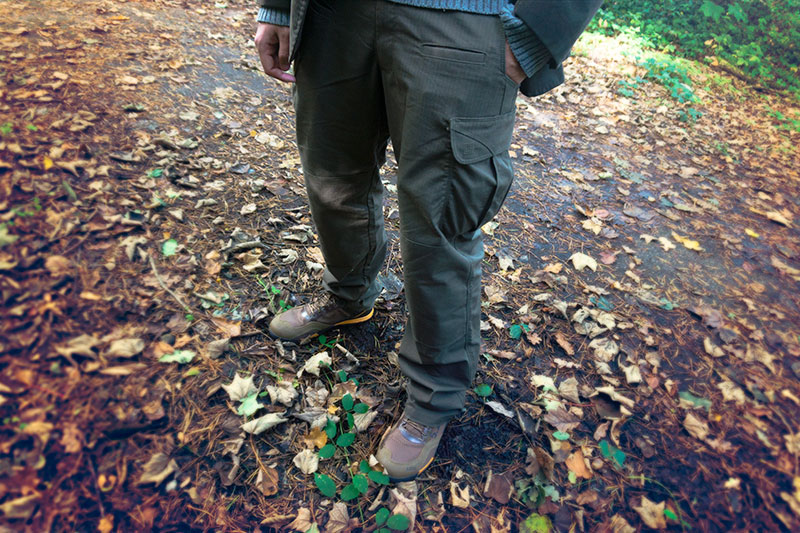 Clothes in many ways define us to the general public. Our appearance can convey ideology and intent before the first word is even exchanged. Ultimately, companies like 5.11 who are known as very tactically inclined both have to cater to their demographic who want bad ass, functional gear as well as to the impression those people will make on the general public.

By nature of their design and place in the world – these pants are pretty subtle. No flashiness or visual quirks that would indicate something other than your standard cargo pants. I personally like that as I live in a city and can’t really get away with looking like I just dropped out of Mosul. I also think it’s disrespectful to attempt to turn uniforms into a fashion statement, which is why I have always been very careful to avoid even passively promoting gear or clothes that pretend to have a military lineage when they do not. It’s just exploitative and unethical. Looking at you Frost Cultery.

So, as far as the “Grey Man” philosophy, these won’t bring you any unwanted attention despite having a lot of features that would be biased towards tactical utility.

Lots and lots of pockets, as you probably imagined. Those pockets close with some very solid velcro and the compartments are large. That’s my full sized bifold wallet (you can see its proportions here) in the photo below and it looks like it’s lost in there. Interestingly, from the outside, as I said – it looks like a normal pair of cargo pants. But in terms of sheer capacity, these pants are pretty crazy. 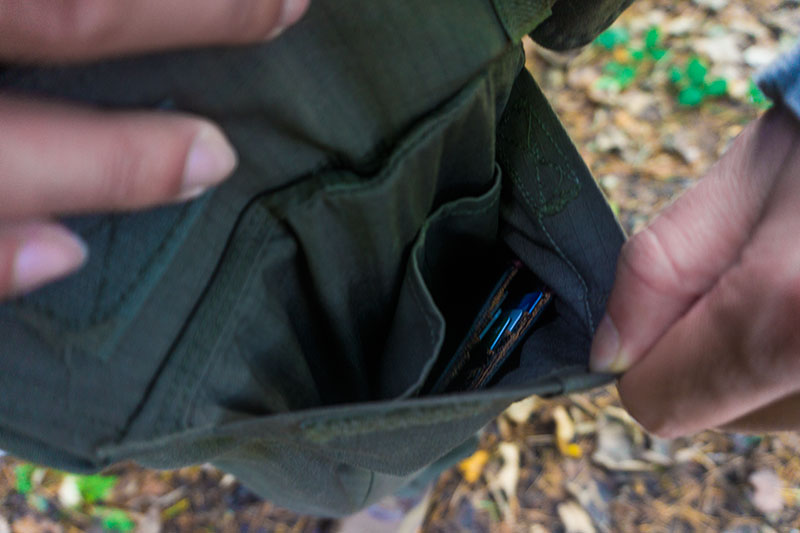 I should mention that all pockets except for the front 4 (I know, 4!) pockets close securely using velcro. 5.11 also has a super nice elasticated waistband with both a heavy duty popper button and a really sewn in proper button. Oh and the standard fare of oversized belt loops to accommodate any belt size – even meaty paracord ones like my Rattlerstrap Titan.

I’ll get on to the construction later, but before that I want to talk about what these are made of in terms of the main fabric. 5.11 calls it Flex-Tac Ripstop fabric and it is super duper tough. That ain’t gonna rip on you. As I’ve said, I’ve been testing these for over a month, and they look literally brand new.

If that isn’t enough, the knees are reinforced and can handle knee pads comfortably. All in all, I have zero complaints but I will say this, I first read the label (very quickly) and assumed this was a lighter gore-tex kinda deal, but it’s not. It doesn’t have that annoying crinkly sound goretex often has. At the same time, it doesn’t offer water resistance to the same level. Whether it’s a worthy trade off is up to you.

I went out in the rain with the Stryke pants pretty often (I live in the UK after all), and was initially pretty confused by how they were handling water. Essentially, droplets would pool up, which lends me to believe that it repels water, but then… somehow they get absorbed. I think for light showers they will handle themselves well, but before you write this off as a criticism, I actually really like their performance in the rain because they dry very, very quickly.

It seems to me, you have 2 options. Either have something that repels water through a waterproof lining (which is heavy, doesn’t breathe well and doesn’t blend with your environment subtly) or have “normal” looking, feeling, and sounding pants that have been sprayed with a rain-x type of coating, and as we all know, they don’t last.

So yeah, I will take subtle, fast drying and comfortable any day of the week. And, yet again, I say this as someone who lives in the UK.

Back to the pockets: on the front you have 2 lil’ pockets which are about 5 inches deep. They are the literal best thing in the world. I can’t imagine a pair of pants without them anymore and everyone should do it. I use the right one for my vape and the left for a knife. It’s a small feature, but the one that made the biggest impact on a day to day basis. I like having options when it comes to carrying my gear and with this platform, I feel like I don’t need to EDC a bag, I can carry the essentials on my person and not look like a camel so it’s a win/win. 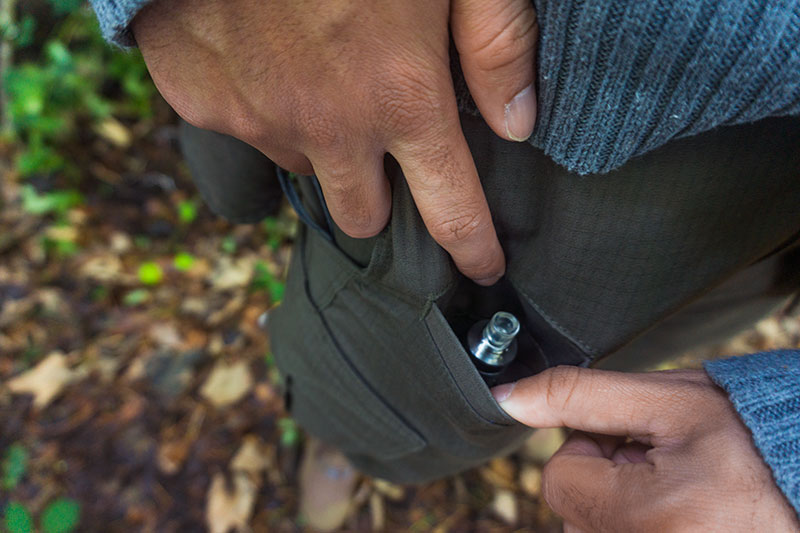 Right, so the quality side of things. When it comes to clothes, most stuff is pretty bad as a general rule. As I was saying previously, clothes are designed to be fashion statements, to look pretty and to be replaced. With “tactical” gear, however, they’re expected to have a certain amount of abuse in their lifetimes, and consequently they are stitched with that in mind.

The 5.11 Stryke Pants have so many reinforced points that I seriously doubt these could fall apart from simply tearing. I expect I will just wear them out naturally over a period of years, so ultimately I think this is a solid winner insofar as durability goes. I haven’t noticed any damage to the main fabric, but 5.11 does advertise the toughness of its apparel, so I don’t foresee that being an issue long term.

I did recently get a Spyderco Matriarch 2 with the Emerson Wave feature and it didn’t seem to harm the pockets much, but that’s a pretty extreme example. Ultimately, time will tell. But if any stitching is going to claim victory over the Emerson Wave, then this is it.

Tactical gear is frequently overpriced, you pay a ridiculous premium for the perception of toughness, but when it comes to clothing, it’s better built than 99% of mainstream brand crap from The Gap or American Eagle, so it feels like ridiculous value in the grand scheme of things.

I really like the little features like extra pockets and the creature comfort options like the self adjusting waistband. It makes sense from a practical perspective and it’s frankly weird that no “fashion focused” brand has bothered with such improvements when it makes the clothes so much nicer to wear, as opposed to just being nice to look at.

Add to that the fact that 5.11 Tactical’s Stryke Pants in particular don’t make you look like you just walked off the set of rambo, and that they pretty much hide the fact you happen to be carrying so much no matter how much you throw into their pockets, I think its pretty clear that I am smitten with them.

The sad thing is, I am so impressed by these because the bar is set so low from other mainstream manufacturers. All pants should be built this way folks!

Thanks to 5.11 Tactical for sending us this product to review for ourselves.