If you got here by typing something like “best EDC knife” into Google, you probably already have a little history with knives. Likely, you already have at least some indication of what you do and do not like in a knife, owning at least a few yourself already. But chances are, you are also looking to see what others think on the topic of the best EDC knife as well. In all probability, you’re looking to see:

Well if that’s why you’re here, you’re in luck. We’re here to remedy all three of these problems in this one (admittedly quite long) article!

Frankly, I’ve seen so many spammy articles on the “Best Everyday Carry Knife”/”Best Pocket Knife” topic around the net that I thought I’d throw my own experience into the mix to set the story straight at least a little.

While I haven’t reviewed every single item on this list, I have reviewed the vast majority of these knives. And unlike those spammy sites where the author just regurgitates Amazon reviews into one copy written review piece that they publish on their blog, I’ve actually handled each and every one of the knives I’ve reviewed on More Than Just Surviving (and have the original photography taken by Elise to prove it).

Not trying to toot my own horn here – realistically, I’m just trying to get you to think about where you’re getting your information from. We’re certainly not the only ones on the net to use every knife we review before we write up a review, and there actually are plenty of great EDC/general knife reviewers & sites out there that do some kickass knife reviews. Just want you to think about where you’re getting your advice from, as there are knife people, and then there are niche site creators just trying to earn a quick buck from an industry they know very little to nothing about.

My recommendation: get your knife advice from boss knife guys like,

Hell, as much bad rap as Nutnfancy gets at times for some of the things he says on his YouTube Channel (politics mostly) – at least no one could ever deny the fact he uses each and every product he makes a review about. He’s not everyone’s cup of tea, but he’s at least genuinely reviewing. Nutnfancy does his best to test each product he uses well enough to give you his own informed opinion – you absolutely have to give him that.

Now, before you start looking through this massive list (sorted into categories so it’s much easier to browse – if you’d prefer an article that sorts the best EDC knives by price point, take a look at our best bang-for-buck folders article), I’d like you to first get it into your head that the best everyday carry knife on the market will be different for each and every person. Don’t think that because the knives on this list are deemed some of the best in the market that you’ll find the very best one for you on this list.

Yes, if a knife is popular enough and highly recommended by other knife users, it does typically indicate that knife is probably going to at least strike your fancy as well – after all there’s typically very good reason that a knife is a hit, especially when it comes to a market as saturated with new and high-quality products as the knife market. If there’s a hit it’s usually a hit for good reason (I say and mean usually; some knives truly do not deserve the praise they get – but that’s pretty rare).

Finding what works best for you is no minor feat. It’s not an exact science either – sometimes knives that look great on paper just don’t feel right in the hand, which is why we’ve not only taken the time to make this list, but to direct you to the product reviews we’ve written up on the individual knives as well. That way, in case you’d like to take a look at some in-hand shots or figure out what there is to like and dislike about a knife before you make a purchase – you can do that. There are some knives that I really recommend trying in person before you buy, like the Manix 2 FRN for instance. Others – well really the majority of knives – you can get away with watching a video or reading a review to learn about how they feel and that’s typically enough to let you know how they’ll be for you in person. 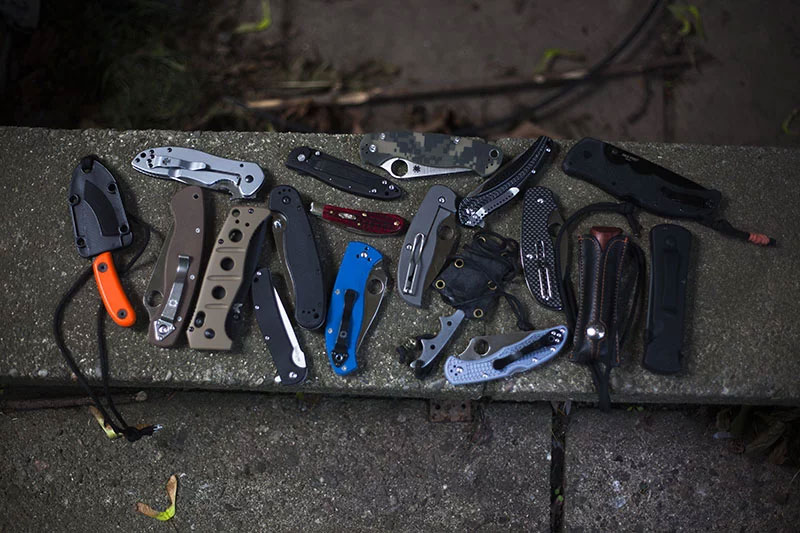 Now before I start breaking things down, in case you’re new to the knife world, I did want to let you in on a well-known fact within the knife community. There’s one everyday carry knife that pretty much has remained consistently at the very top of the list for so many knife users from the date it first came to production until now.

This knife is almost always sold out. It could be in stock one day and gone completely off Amazon the next. And it’s not even a new knife. In fact, the knife was released way back in July of 2010, and it’s still so incredibly popular that it can be really difficult to snag.

What is this knife?

I’m sure you seasoned knife guys reading this already guessed at even seeing the “single best EDC knife” title. There was absolutely no surprise here for you.

Time for the explanation. Why’s this thing always at the top of the “best EDC” list? Well for starters, it’s pretty much the single most inoffensive technically tactical option currently available on the market (in my opinion). Does it look like a tactical EDC? Not really, no. Could it be used as such? Hell yes! It’s one of the stabbiest knives on the market that still happens to be an everyday carry option. It punches way above its class – both in terms of price and in terms of the fact that it’s supposedly a mere EDC knife. Everything about its design and construction is geared towards being above average with no real points of failure. It’s tough, but not a beater; it’s a good cutter, but not a light-saber; it’s not expensive, nor is it a cheap knife – I could go on for days, but you get the idea. It’s just a great all-round, all-purpose knife. Arguably better than any other knife on the market for this (not just by me – by everyone; just check the forums if you’re unconvinced). 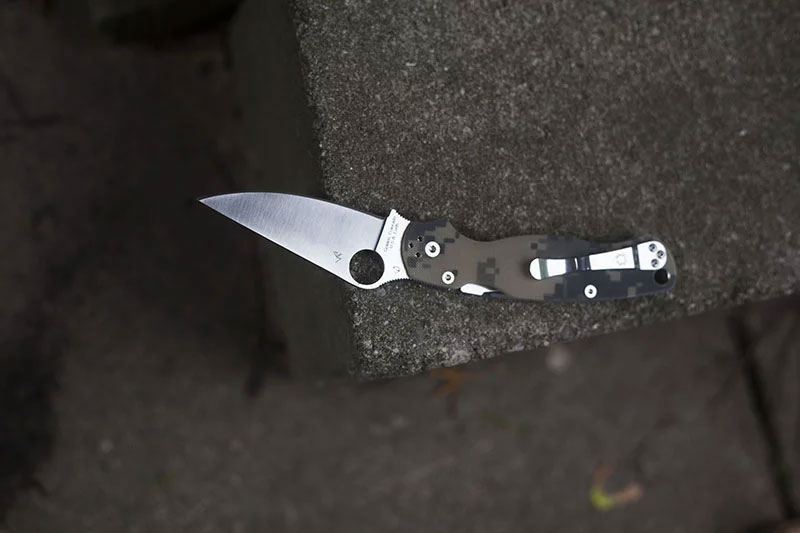 In the cutlery industry, manufacturers tend to have to cater to a specific demographic in order to stand out. Spyderco, with the Para-military 2, opted for producing something that is truly mainstream in the purist of ways – no catering to “I want a super ninja folding pry bar milspec warrior soldier knife!”

Remember how I said that just because there seems to be universal consensus and love for a specific knife, and that on paper it could be absolutely perfect, but it just doesn’t work out or happen to be the right knife for you? If you have read my review on the Para-military 2, you will likely have remembered the fact that I clearly state this is definitely not my favourite knife. I’m not in love with the Spyderco Paramilitary 2 like so many are, and yet I really do have to firmly recommend it as the best EDC option. It’s just not for me (not getting into details here as if you’re interested, you can always take a glance over the review!).

As someone who owns literally hundreds of EDC knives, I can think of many knives that I do love and yet cannot possibly recommend on a list of the best EDC knives (the Kershaw Blur and the Buck 110 to name a few). These are knives that, while I do adore them for what they are, have inherent compromises or flaws that force me to remove them off any “best EDC knife” pedestal.

So there you have it, if you want an EDC knife that can do more or less everything at an acceptable (average – not too pricey not overly cheap) price with no real flaws to speak of, I give you the Spyderco Para-Military 2. 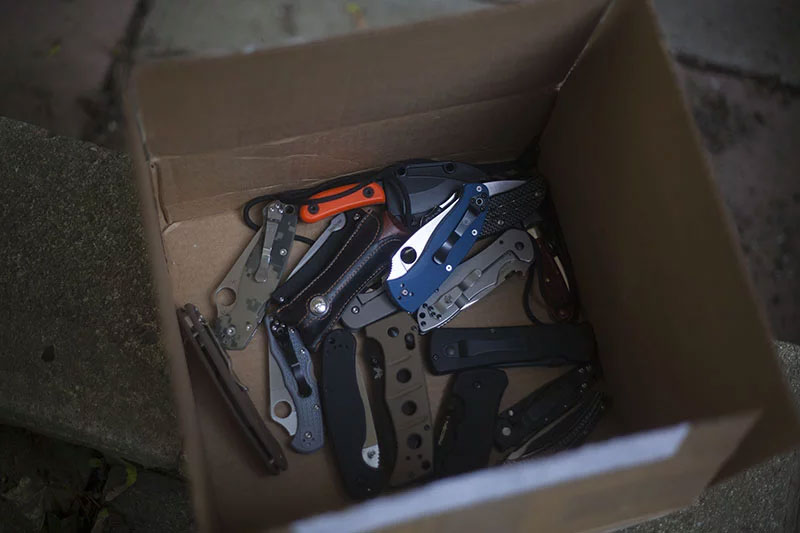 Best Across the Board EDC Knives 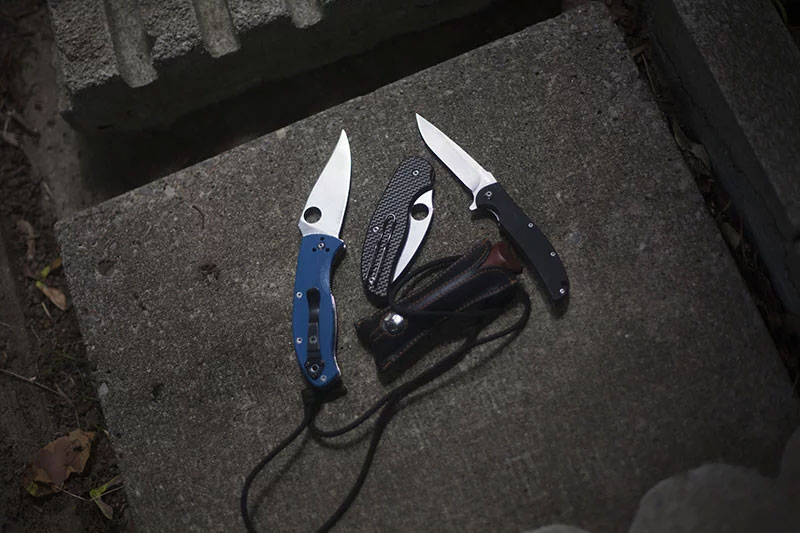 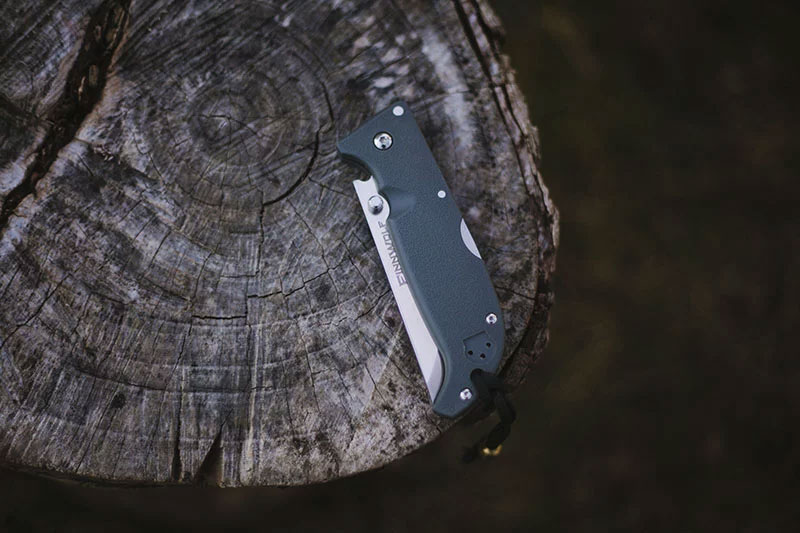 If you’re interested in seeing more lightweight knife recommendations than are listed in this section, take a look at our article on the best lightweight folding knives for hikers. 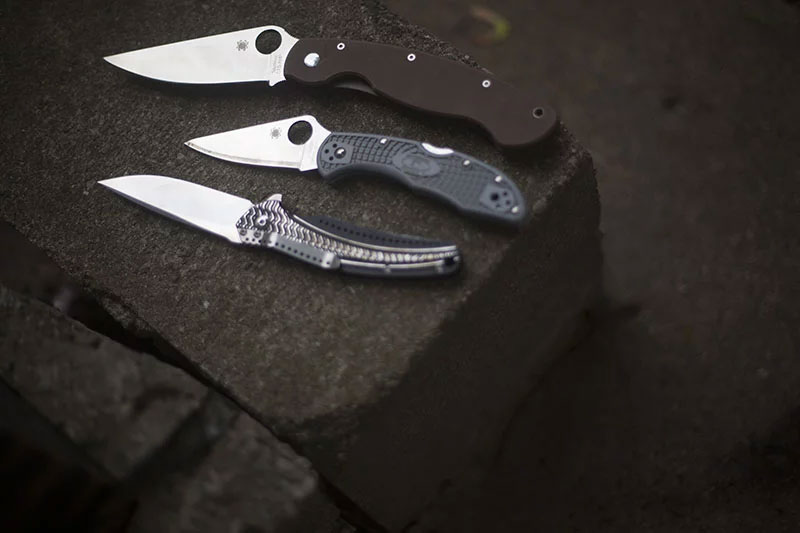 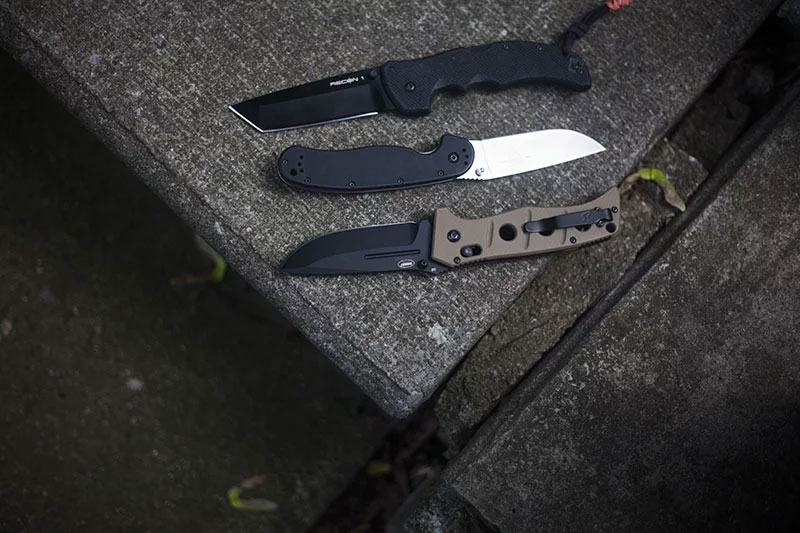 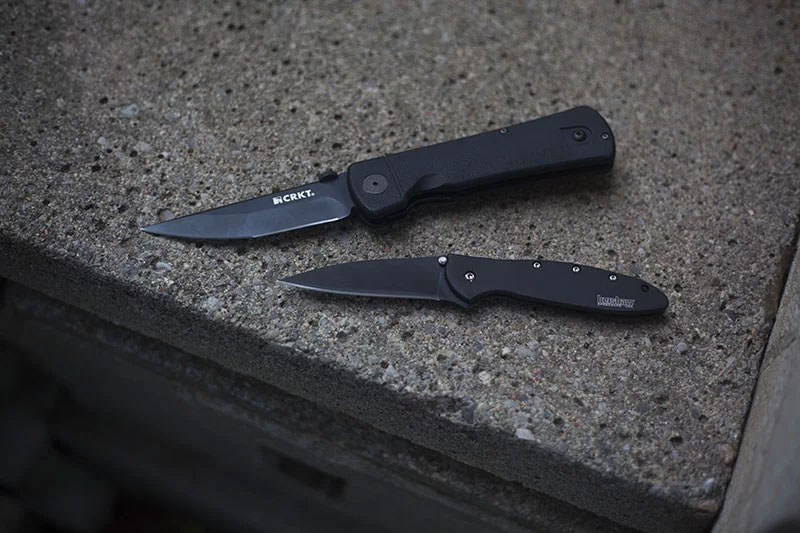 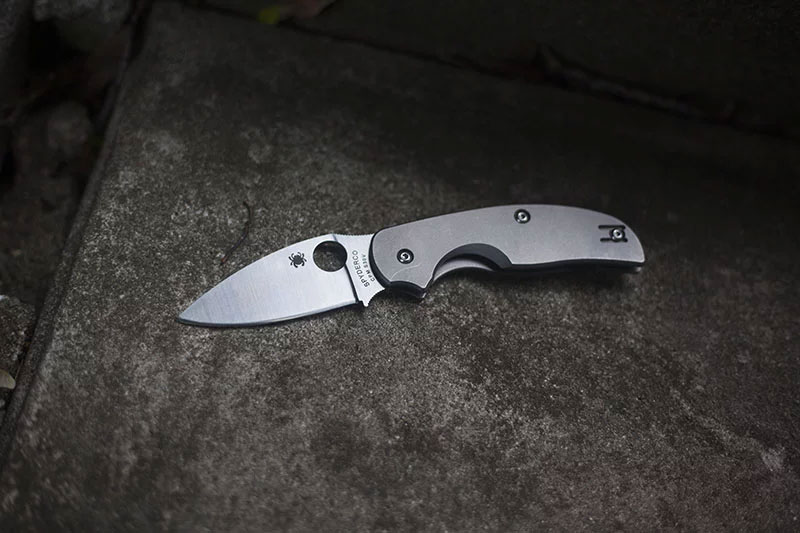 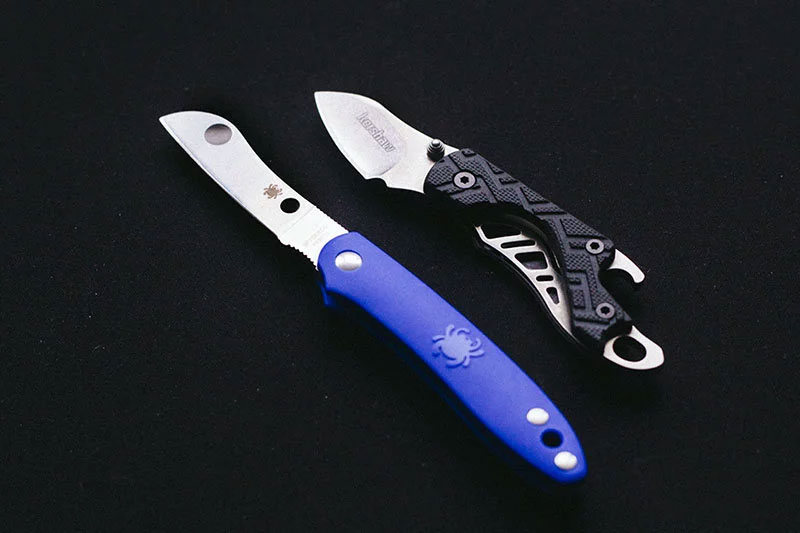 If you’re a lefty who wants more recommendations in this category, we’ve got your back.

A neck knife fan? Want to browse through more recommended options than just these three? 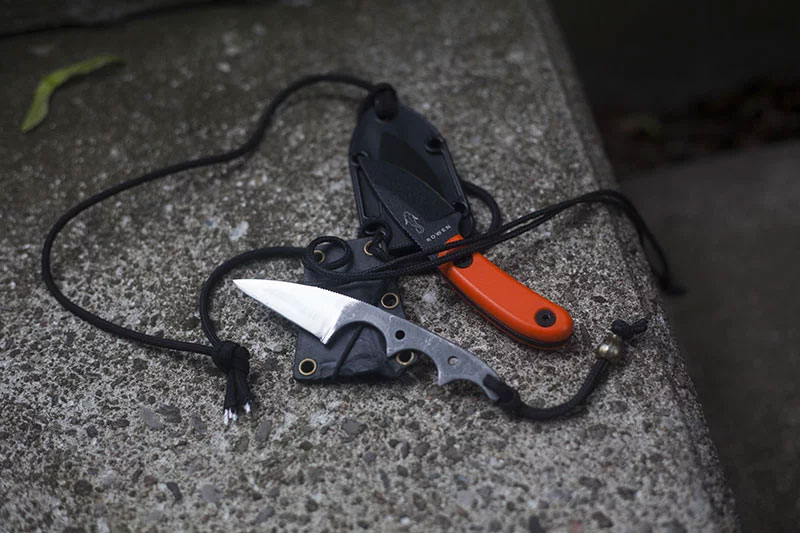 If you liked this list, but haven’t yet found what you were looking for, check out what I believe to be the best bang-for-buck folding knives by price point.

And if you’re interested in brand new knives that have just hit the market, check out my take on the new knife releases from 2017 (specifically those showcased at SHOT Show).

Find current sales on knives and other camping & outdoor gear offered by knife retailers like Knife Center, Blade HQ, and GP Knives, as well as outdoor retailers like Cabella’s, REI, and Patagonia on our massive list of knife & outdoor retailers’ sale, deal, & clearance pages. We’ve added as many discount pages to the list as we could so that deals around the net are easy to find from this one page.

What Do You Think Are the Best EDC Knives?

Well that’s a mega-post if I’ve ever saw one! Hopefully you’ve found what you were looking for – or at least something you liked – and if not, no worries! Keep an eye on our reviews as there’ll be plenty more EDC knives featured over time.

Let us know your experience with any of the knives listed above in the comments section. If you feel like a few knives that didn’t make it to this mega-list should’ve made it up there, let us know which knives and why – as well as which section you feel they belong in.

And of course, if you have a favourite EDC, be sure to share that with us as well!