Cold Steel has never been shy about buckling trend and the Talwar really brings this point home in spades. Very few knives in my collection (and as you can imagine, I have many) feature a more visceral presence, and whilst the Talwar is (slightly) over the top and styling can be seen as a bit “too much” for some, frankly, I think it benefits the industry as a whole to have such divisive and honestly bad ass blades on the market. 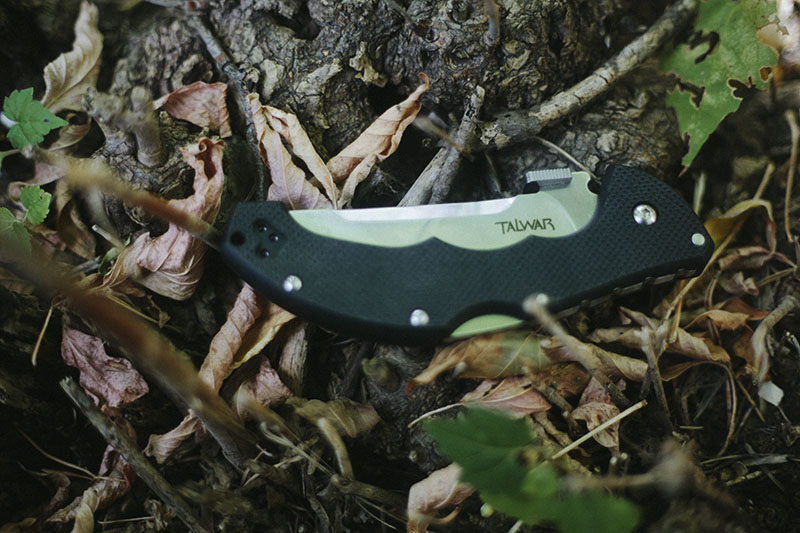 The Talwar is probably one of my favourite looking knives: a wicked upswept blade with an aggressive swedge and that kickass wave opening that is also found on the Rajah 2 – all in all a pretty unique package with killer aesthetics. 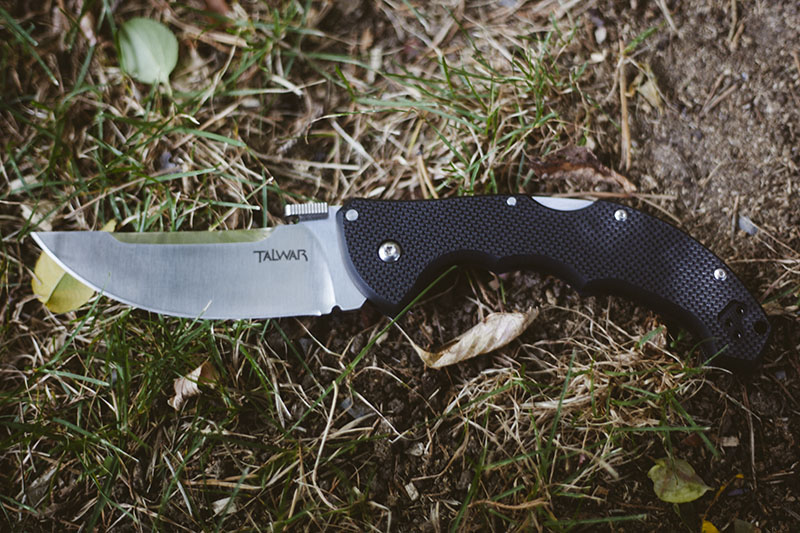 The knife is almost small when closed. I say almost, of course, because it’s still a large knife with a handle length of 5.25 inches (13.34 cm), but with the knife closed it’s remarkable how much smaller it seems. 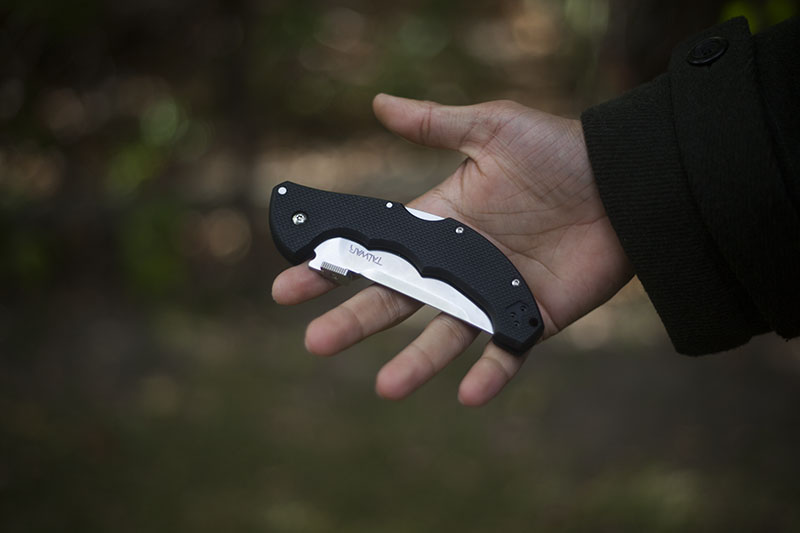 I own the regular 4 inch Talwar in the now discontinued AUS-8 steel. The newer Talwars feature a CTS-XHP steel upgrade, but beyond that, they are identical, so this review is just as relevant. I will say that the CTS-XHP blade steel upgrade seems worth it to me, and the price is very reasonable, so I don’t see any negatives with the change.

I figured I should mention this early in the review for those of you who are on the fence about the new steel upgrade. 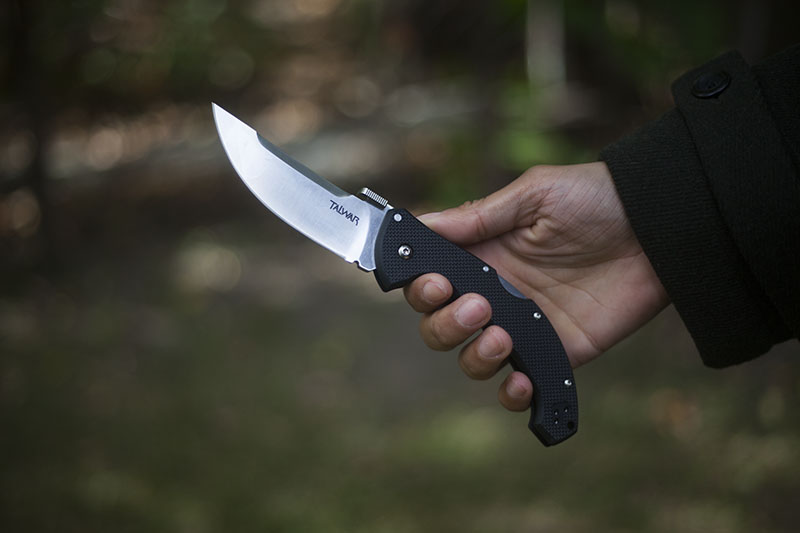 The blade of the Cold Steel Talwar is nicely balanced with a stock thickness of 0.157 inches (0.4 cm). I feel this is pretty perfect for what is clearly a tactical blade and not your traditional heavy duty knife like the Benchmade Adamas. 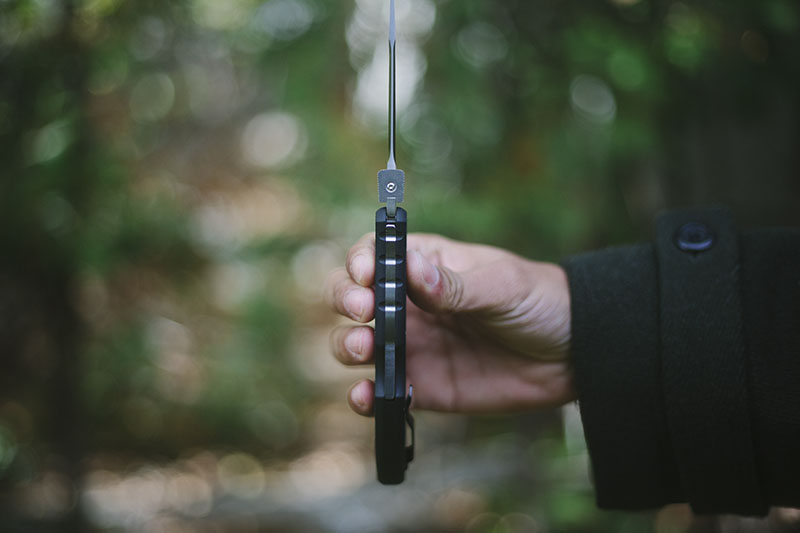 The T.R.I.A.D. lock is one of the most recognizable and well loved features that Cold Steel brings to the table Unbelievably tough and consistent with real world results that speak for themselves. Check out Cold Steel’s YouTube channel featuring none other than Andrew Demko giving the lock (and the competitors’ locks) a serious head to head work out, which in all instances works out in Cold Steel’s favour.

For a tactical knife, I can’t think of a better choice for a lock. I know it’s expected by now with Cold Steel, but I think it’s important to bring it up as a subtle encouragement for other companies to step up their game and offer insanely tough locks at all price points as well! 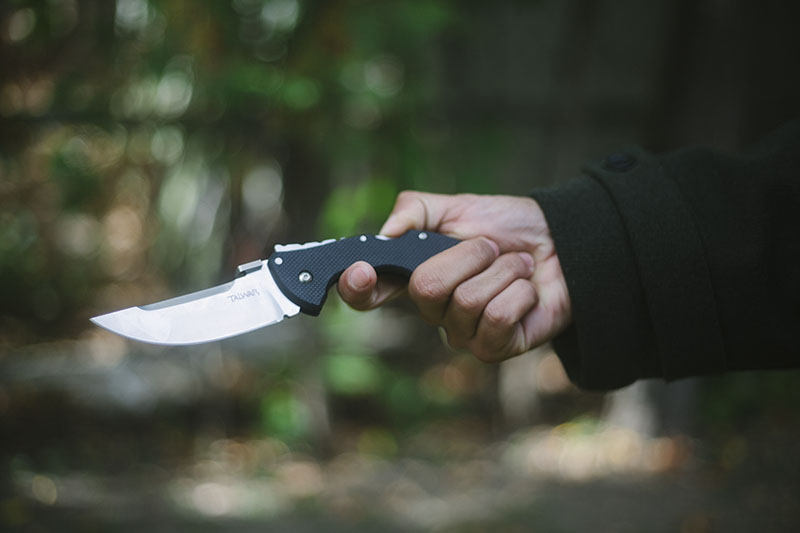 For the sake of review consistency, I will say that should the lock fail (it really, really won’t) the Talwar has a pseudo choil/unsharpened area, and so instead of losing all your digits, you might only lose a few. This is super unlikely to happen, and the only thing stopping me from saying it’s impossible is the fear of legal liability.

In short, during regular use – it’s the toughest lock on the block. Bar none. 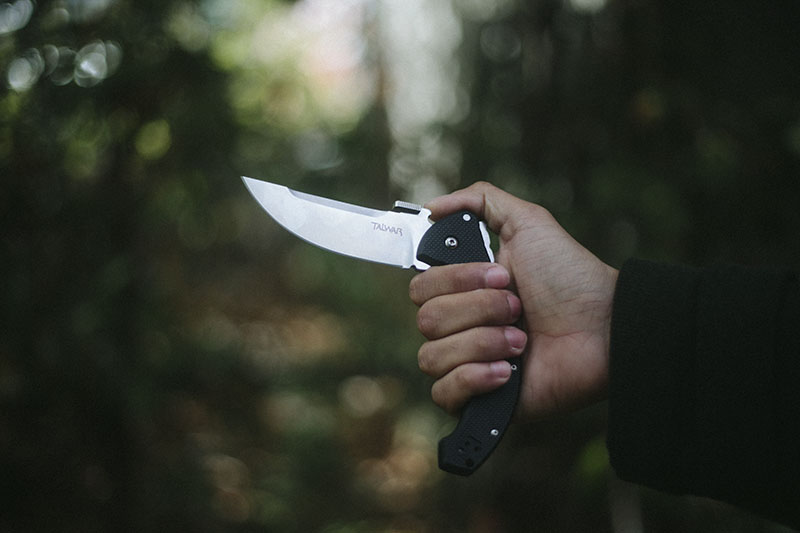 The coolest aspect of the Talwar is, in my opinion, its awesome blade with its super aggressive swedge. This basically gives it an unbelievably badass “penetrator” tip that in practice not only looks great, but serves its purpose of keeping the belly lean(er) and the tip strong(er). I love it and wish more knives had this aesthetic flourish, as I think it brings advantages with no real downsides in real world use. 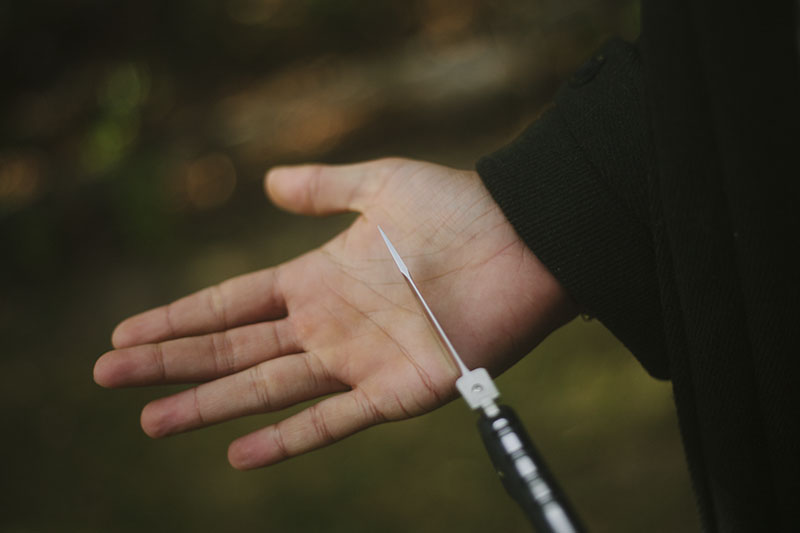 Centering of the Cold Steel Talwar is dead on perfect, as is expected with the Tri-Ad lock. No side pressure means perfect centering is trivial. An off-center blade would be caused by warping or a flaw in the machining of the blade/pivot. 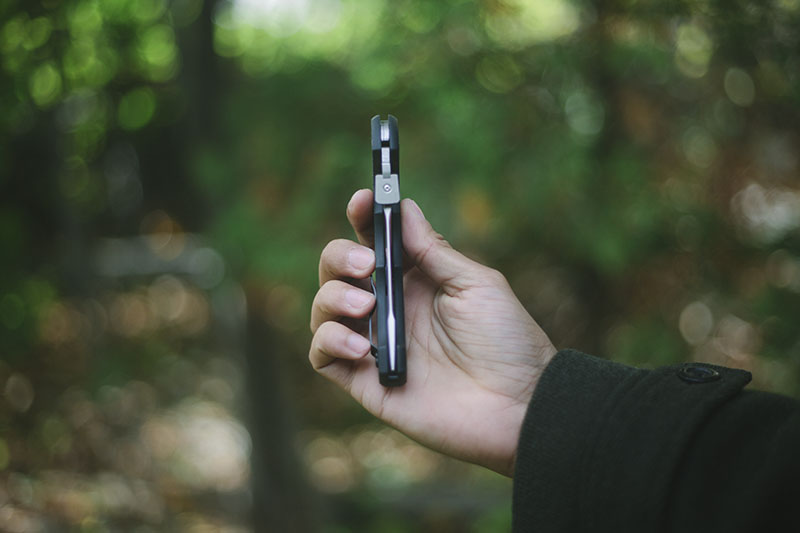 Interestingly, the only flaw on the knife is on the right hand side scale. The Talwar’s G-10 scale has a 1.5 inch section that appears to be burnt or badly surface finished. It’s disappointing, and I will mention that this is the only Cold Steel that I own that has a visible manufacturing defect.

That being said, the flaw is purely aesthetic, so all in all, I don’t really care all that much. Definitely won’t be returning the knife, but it’s still a flaw and thus something to be pointed out. I think I just got unlucky with this particular one, but let me know in the comments section if you had or saw something similar on another Talwar. 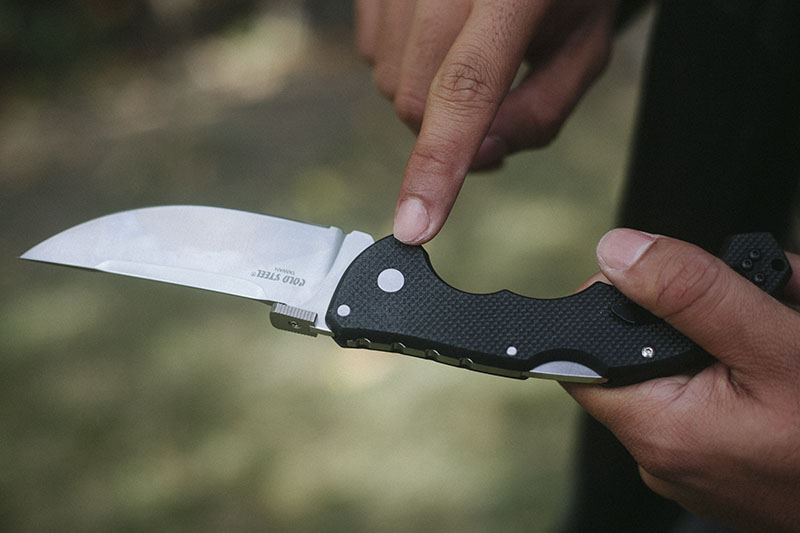 Speaking of the G-10, the scales of the Cold Steel Talwar are roughly textured and seem to be identical in both manufacturing and texturing to the Recon 1. The only difference is the shape, as the contouring and thick jimping on the spine are basically the same (technically, the spacing is slightly different, but in terms of feel – identical).

Cold Steel should be applauded for once again sticking to linerless construction. G-10 is plenty strong enough without inserting useless steel liners that do nothing but add weight. All of the linerless Cold Steels that I own have perfect balance, and the lack of liners is the principal reason behind that. 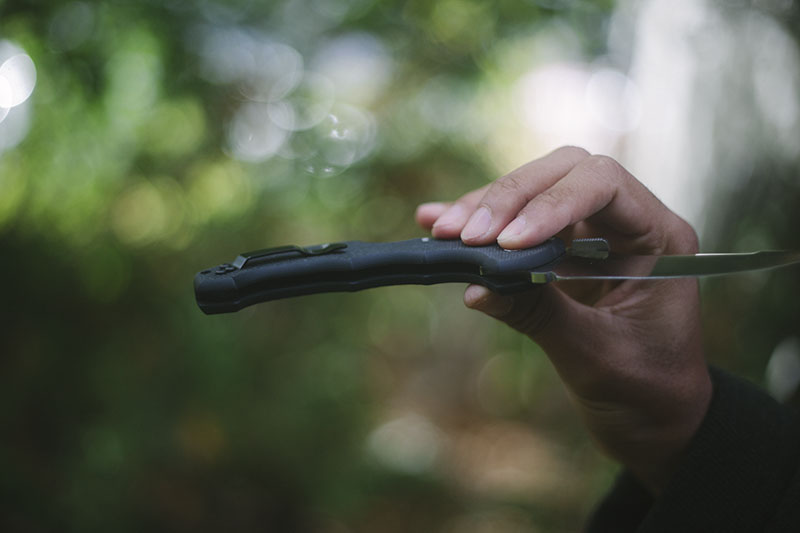 Deployment of the Cold Steel Talwar is very smooth with the thumb plate. I do prefer using the thumb plate to the wave mechanism for this knife, as I like the feeling of control and consistency without the risk of either tearing out my pockets or the blade not engaging fully with the lock. 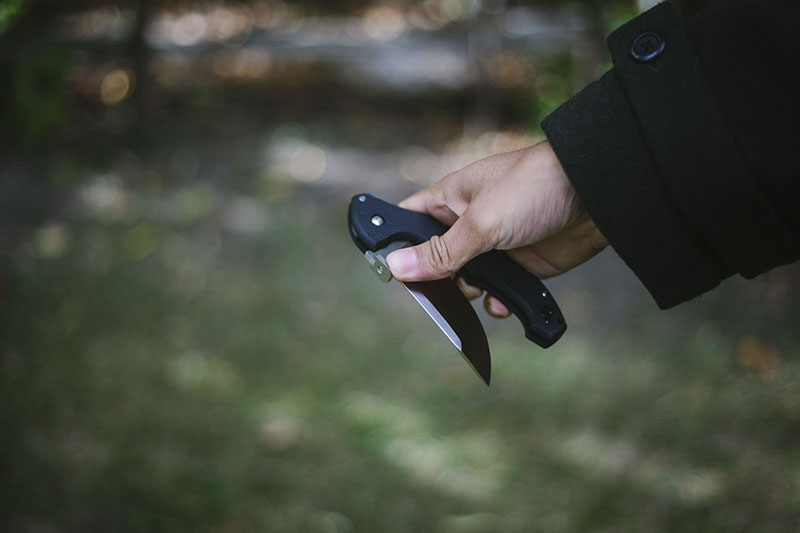 The wave function works fine in practice, but I am just not super comfortable with it. I will say that whenever I made a conscious decision to deploy the knife using the wave mechanism, the blade deployed fully and the TRIAD lock engaged with authority. I just don’t have the practice to feel 100% confident with it yet, and in a stressful/combative situation I would stick to a deployment method I have used a zillion times before. 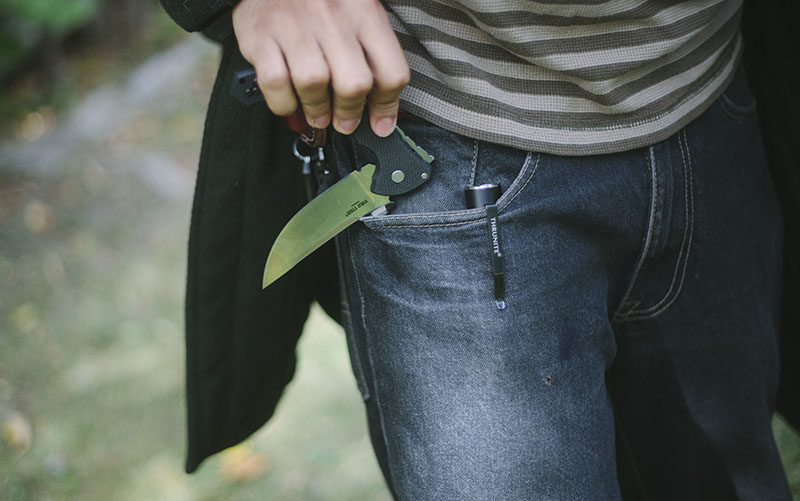 The pocket clip is very tight against the rougher G-10, and thus it can be a bit of a pain to withdraw the Talwar. The knife has the annoying habit of catching against the denim. This can be solved by using sandpaper on the section where the pocket clip meets the scale. A smooth surface area will eliminate grabbing and help with quicker deployment.

The Cold Steel Talwar comes with two pocket clips, one for left side and one for right side carry. The knife is tip up only which makes sense taking into account the wave deployment feature. 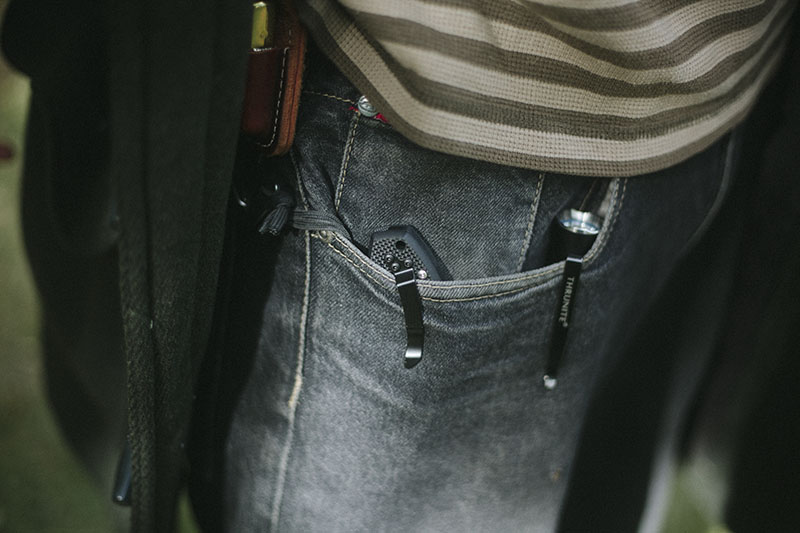 In terms of ergonomics, Cold Steel has never shied away from forcing a sense of comfort by utilizing lots of choils and curves to force your fingers in a grip that they deem comfortable. In practice, this is relatively comfortable, albeit completely forced.

The neutral handle vs ergo handle debate will never end, and whilst I find myself on the neutral handle bias side, I will say that Cold Steel did a fine job with comfort. I do prefer the feel of the Recon 1, only due to the Talwar’s over-accentuated curvature. It’s like holding a roughly textured banana with 3 deep finger grooves that Cold Steel advertises as a pistol grip style for comfort and safety. Sure, why not?

The jimping on the spine is pretty discreet/not sharp. Not convinced it’s needed, but it’s not uncomfortable, so I don’t really care. If nothing else, it’s something extra to aid in retention as well as a neat aesthetic flourish. 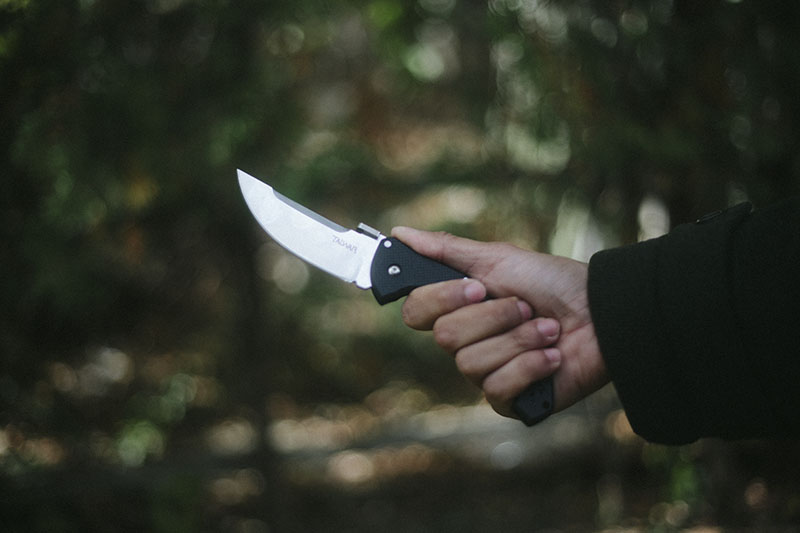 Choking up is sorta possible. The swedge is not particularly comfortable for resting your thumb, but to be fair, this ain’t really a utility knife. Sure the 4 inch AUS-8 blade is nicely ground to a lean full flat grind, but realistically speaking, this is designed as a folding tactical knife. It’s not intended aesthetically or practically to carve up kindling or butcher animals. The ergonomics are very forced and don’t give you much room to experiment, but whilst you have the Talwar in your hands, it’s just not going anywhere, and that’s exactly what you want in a tactical knife. 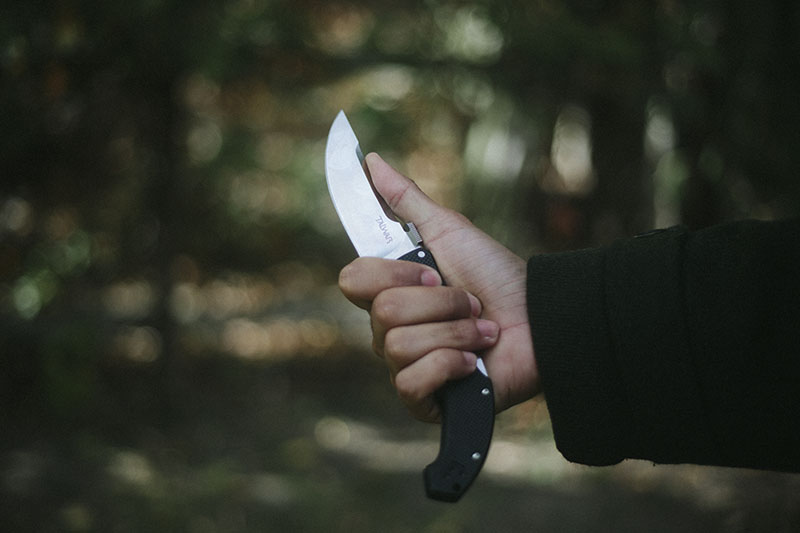 Reverse grip is super nice. The Cold Steel Talwar’s tip is both reinforced and yet super stabby. I always prefer reverse grips for defensive drills and this knife fits the bill down to a ‘T’. Still prefer the Recon 1, but the Talwar’s blade is much nicer.

How about a Recon 1 with a Talwar blade, Cold Steel? 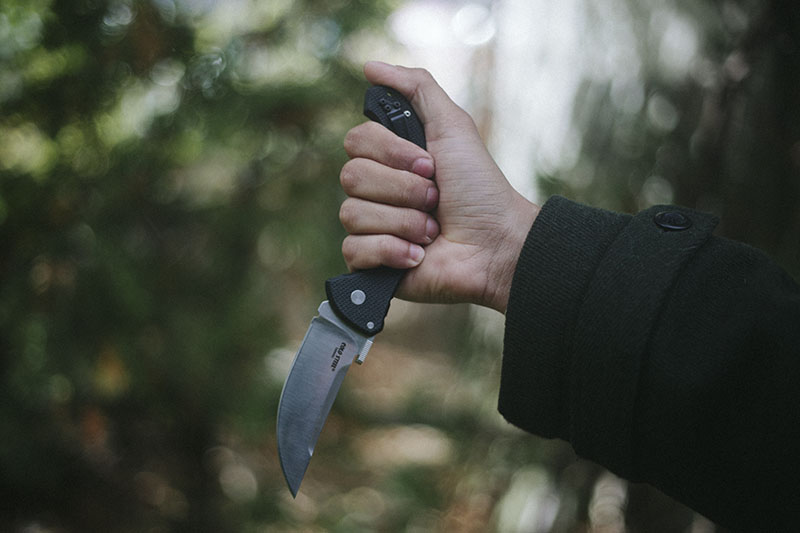 Pinch gripping the Cold Steel Talwar is horrendous. The thumbplate digs into the flesh of your palms and your fingers don’t have anywhere to rest. Once again, the Talwar has very forced “ergo” handles with very aggressive finger grooves. You don’t have a choice in how you hold this knife, though that’s not necessarily a bad thing. For tactical applications, there’s peace of mind in knowing exactly where the blade is relative to your fingers, and so it’s definitely an advantage tactically speaking. 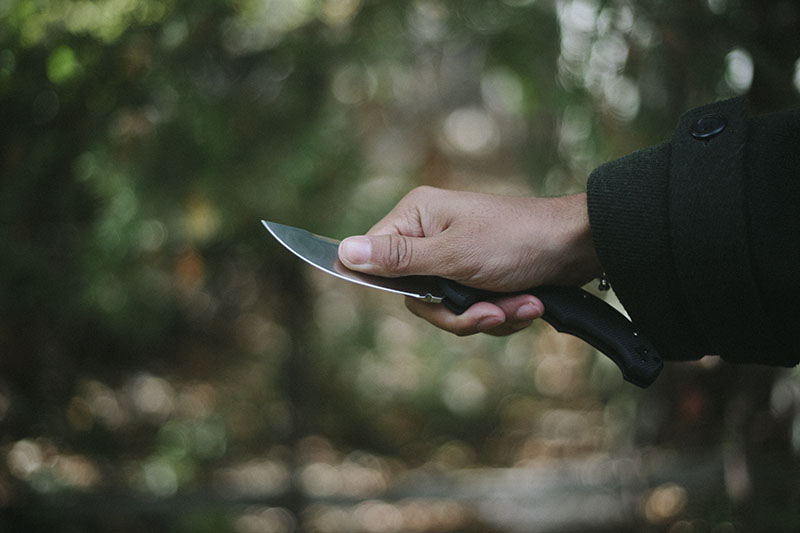 Balance of the Cold Steel Talwar is perfect, as you would expect from a liner-less set up. Please other companies, start taking folding knife balance seriously. The Talwar weighs in at 4.87 ounces and feels extremely light and responsive in hand thanks to its balance point, which is dead on where you would hope and expect it to be – at the first finger groove. 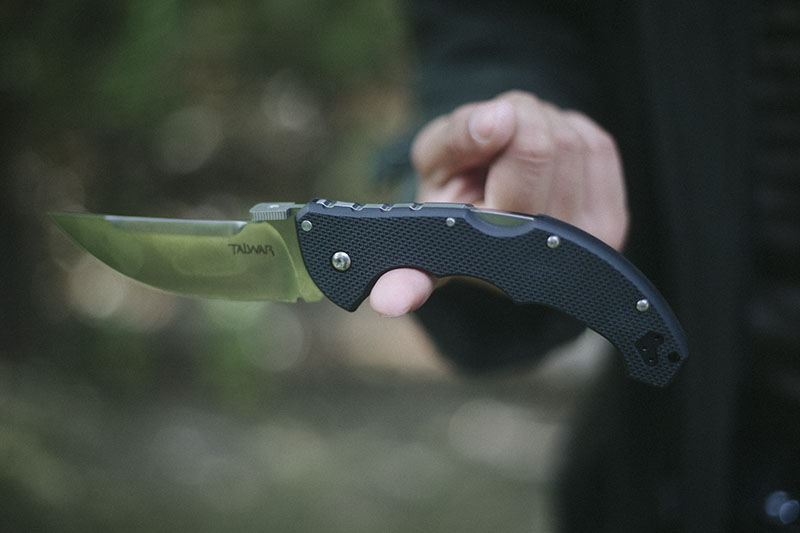 A lot can be discussed with regards to the utility of the Talwar (it doesn’t have much), but at the end of the day, look at the damned thing. It’s beautiful, badass, and inexpensive (taking into account how much oomph you get for your money). 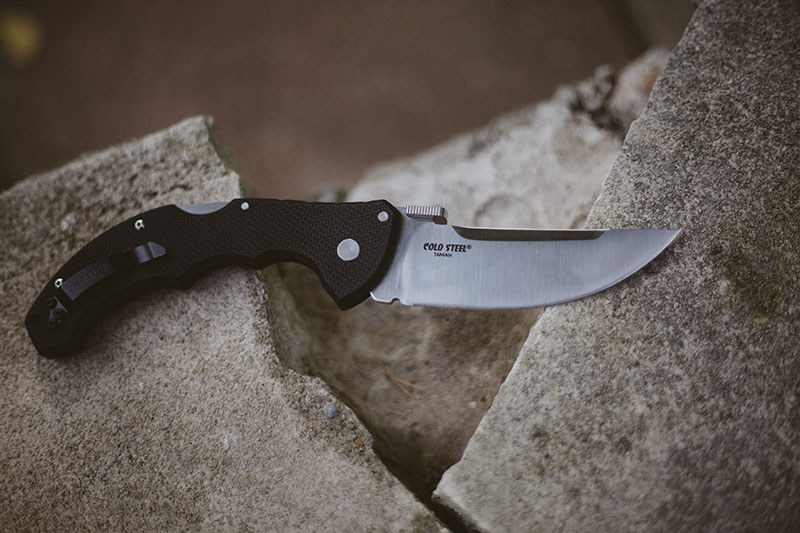 Not all knives have to make sense and I feel the Cold Steel Talwar falls into that category.

If you want a very mean tactical slicer with a super nice aggressive tip and some over-the-top mean styling, then this is going to be your jam. The Talwar brings a lot to the table with the best hard-use lock on the market and some nifty deployment options. Yes, the ergonomics are very forced, but I don’t see people buying this knife and expecting an alternative to the Spyderco Endura. The Cold Steel Talwar has bad intent written all over it, and it’s silly to compare it to any multi-purpose utility knife which needs to offer a more neutral grip option.

It’s not fooling anyone here – you’re either in it full on for its tactical features, or you’re just plain not going to be into it.