The Kershaw Tremor, like the Spyderco Dodo, is one of those knives that’s just so unusual in its styling that you almost have to try it out for yourself. Since it was at such a low price point as well, giving this knife a shot was honestly a no brainer. 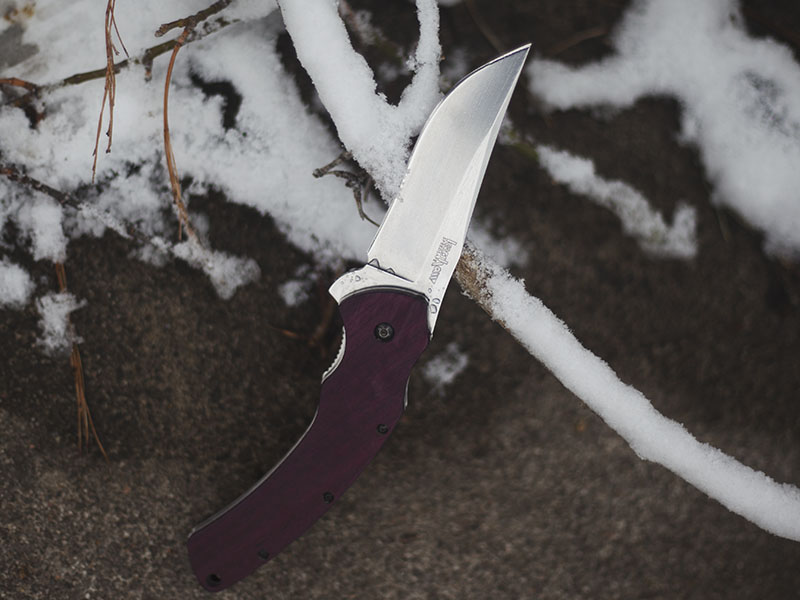 The general aesthetics of the Tremor hit all the right marks for me. I didn’t pick it up thinking it would be a particularly versatile EDC knife, and I was right, but its unique forward pistol grip and clean cut lines work wonderfully as long as you understand the knife’s limitations. 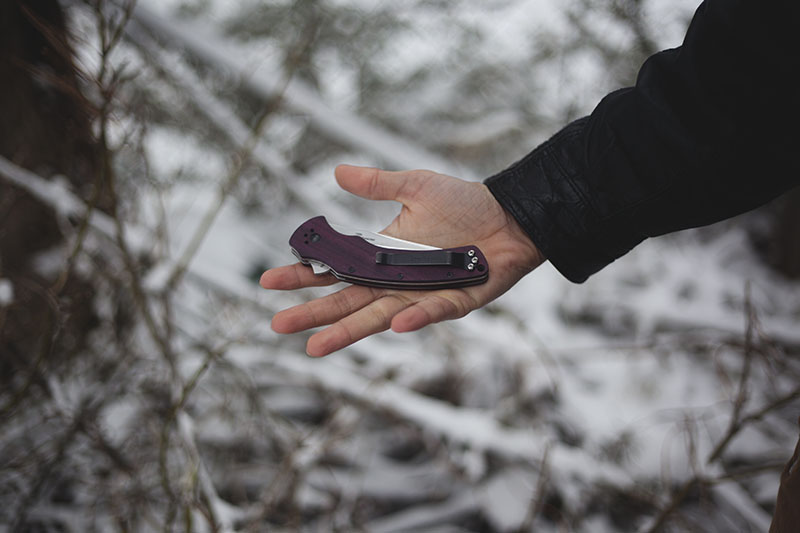 The Kershaw Tremor is 13.5 cm (5.25 inches) closed: and that’s pretty hefty. In terms of bulk, I’d compare it to the Spyderco Military. Now this isn’t necessarily a bad thing, but be aware that if you’re used to and have a preference for small knives, the Kershaw Tremor may not be the right fit for you. 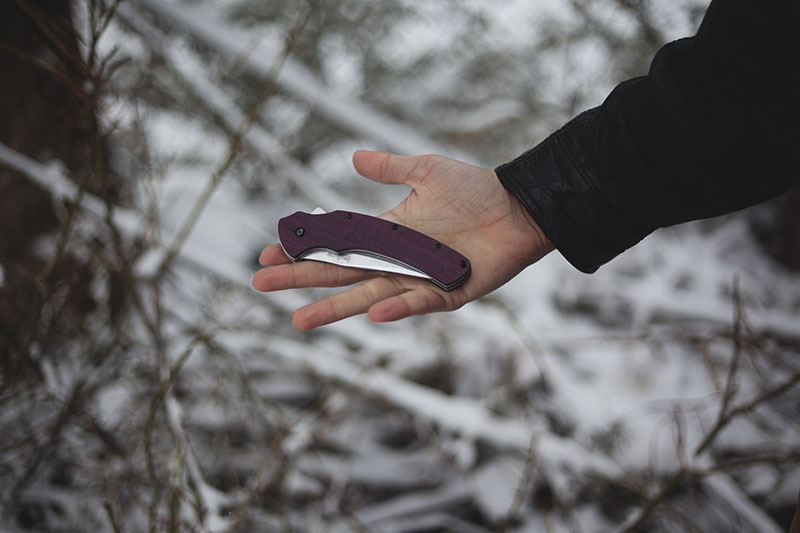 Centering on the knife is almost perfect. If I fiddled with the pivot, I’m reasonably sure I could get it to be 100% centered, but if I did that, I’d risk the assisted opening mechanism not deploying the blade fully. As it stands, my Tremor locks up firmly and deploys quickly, so nothing left to desire here. 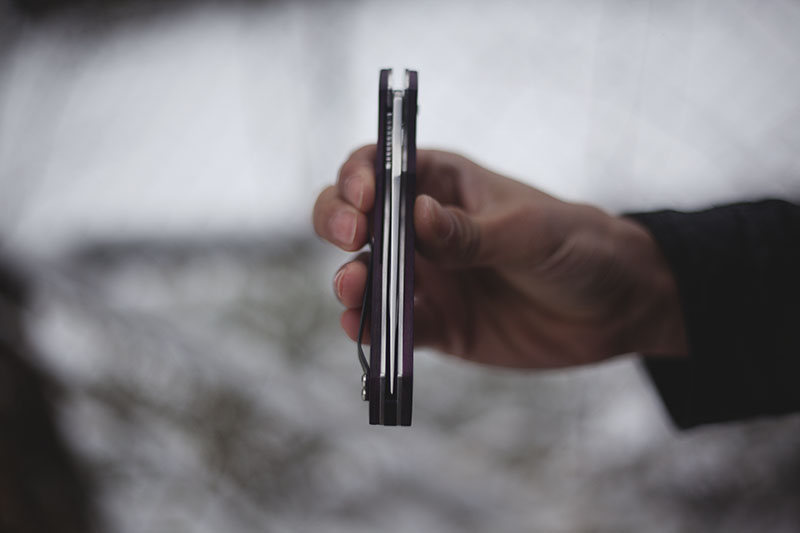 The interesting banana shape of the handle makes it a real hog for pocket real estate, the clip itself is gorgeous and reminds me of Emerson knives due to its very utilitarian profile. I love its matte finish too. Good job Kershaw. 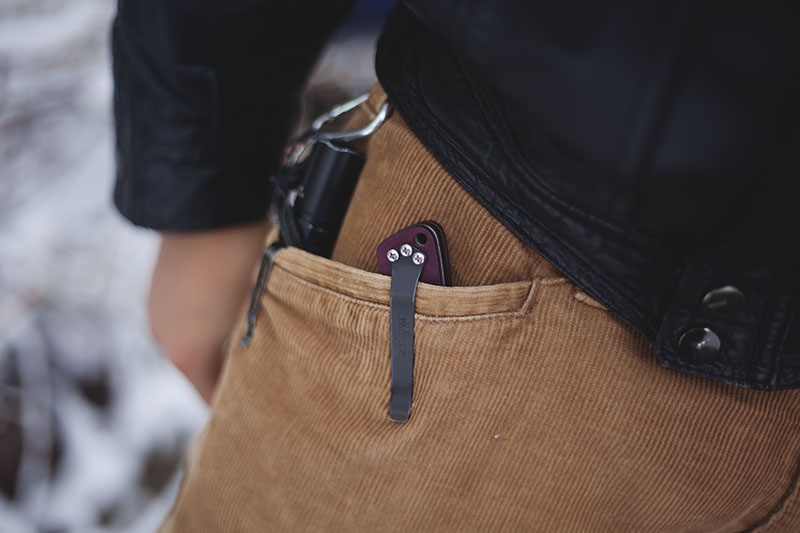 The 3 mm (0.12 inch) thick hollow ground blade makes the Kershaw Tremor a superb slicer for thin materials. It would never be my first choice as a folding kitchen knife, but other than that, as an EDC it works reasonably well. The Tremor’s blade straddles the line between tough and acute geometry very nicely. 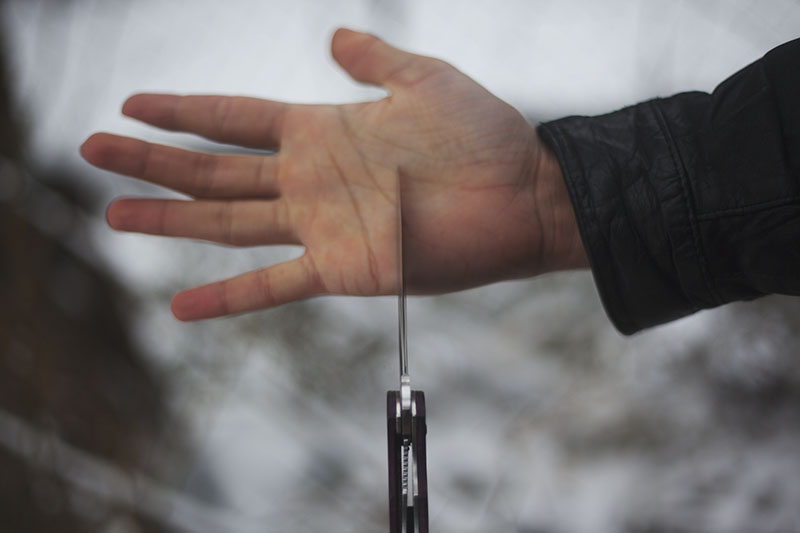 Kershaw’s Tremor is an assisted opening flipper that uses Kershaws “speedsafe” mechanism, which is essentially a bar that is held under tension when the knife is closed and assists in doing the hard work of thrusting the knife open once enough pressure has been applied. It works, and whilst I am not a big fan of extra moving parts in my folding knives, I will say that I haven’t heard of any reports concerning the toughness of the movement: the speedsafe seems quite solid.

On that note I did try to remove the speedsafe system from the knife so it could be just a regular flipper, but unfortunately the blade does not have a hole for the detent ball to slide into. No detent = no manual flipper. But the speedsafe works, and does its job damn well, so no need to tinker with it as I tried to.

My custom purpleheart scales do compliment the Tremor, but even with the standard black G-10 scales, this really is a remarkably photogenic knife. 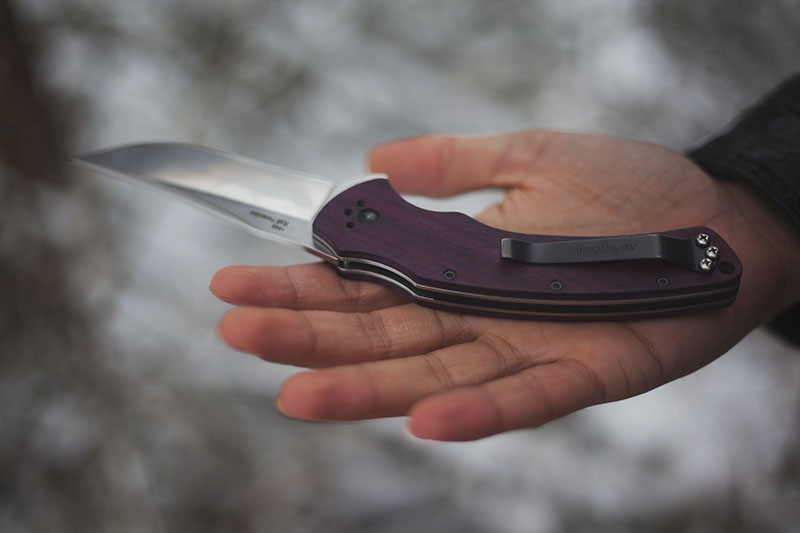 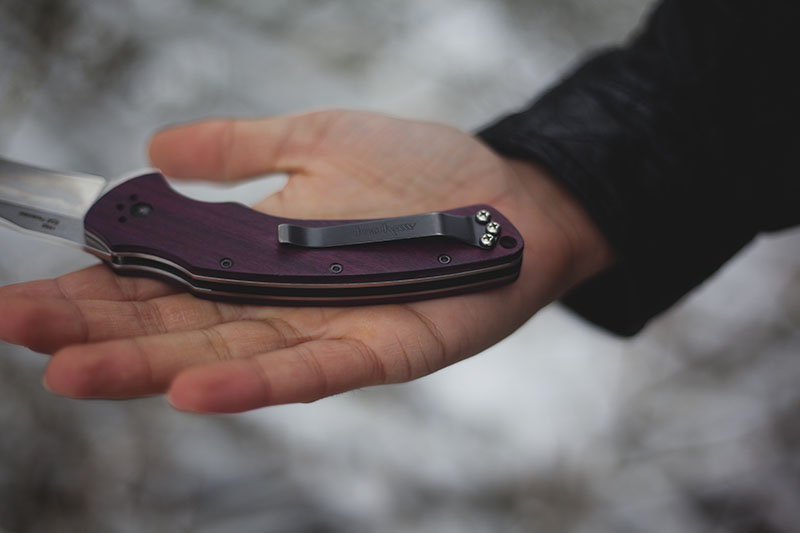 Opened, Kershaw’s Tremor is a solid 22 cm (9 inches) of aesthetically pleasing performance. Once again the comparison between the Tremor and the Spyderco Military is apt, as they both offer a significant amount handle real estate with good blade reach. 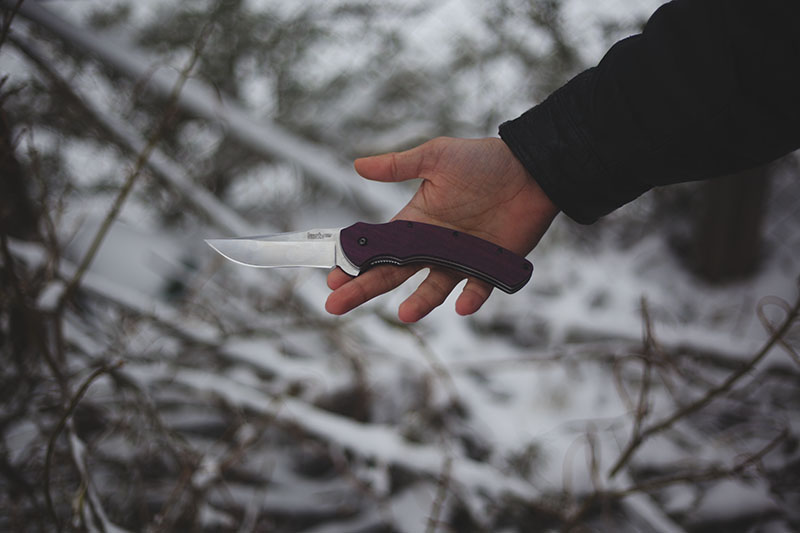 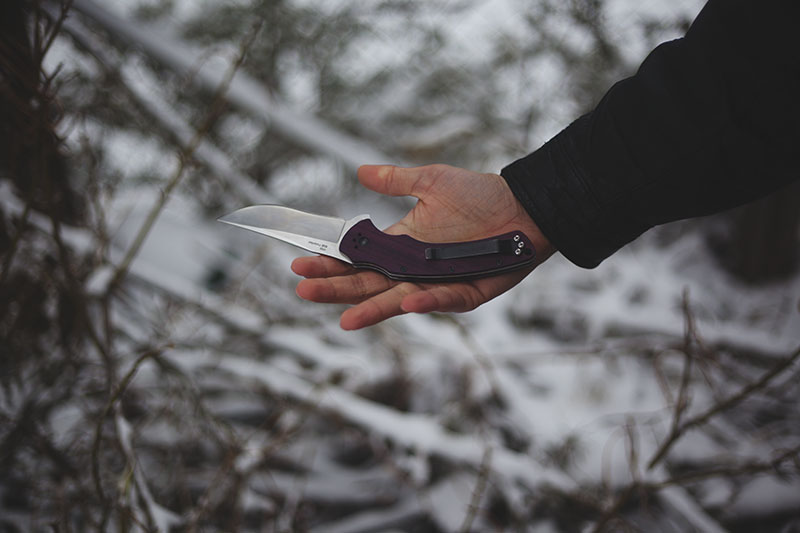 The 9.5 cm (3.75 inch) 8CR12MOV blade features a wicked high hollow grind and a pleasing recurve. The recurve on the Tremor is not overly pronounced, but when doing pull cuts, I did feel that it helped, especially when cutting fibrous materials. I won’t ever be a huge fan of recurves, but I can definitely appreciate their benefits. 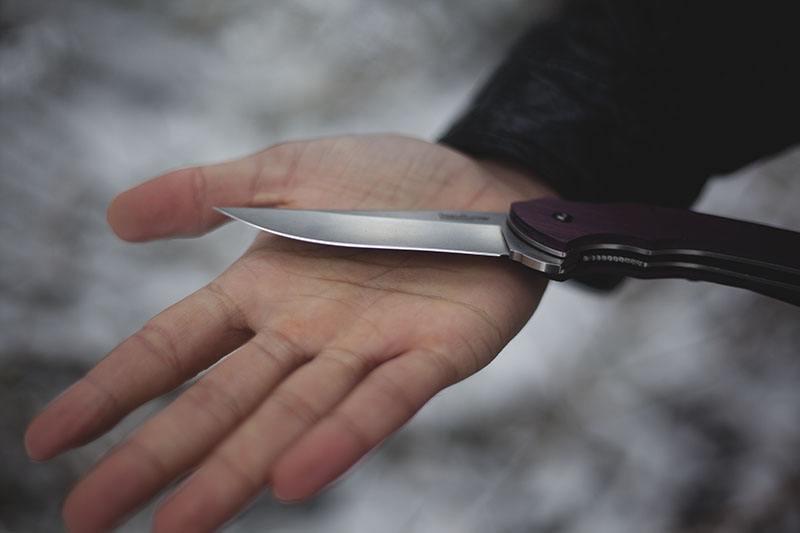 I love that slightly clipped trailing point. The top is not sharpened, but nonetheless it’s perfect for adding a nice point to an otherwise very wide knife. 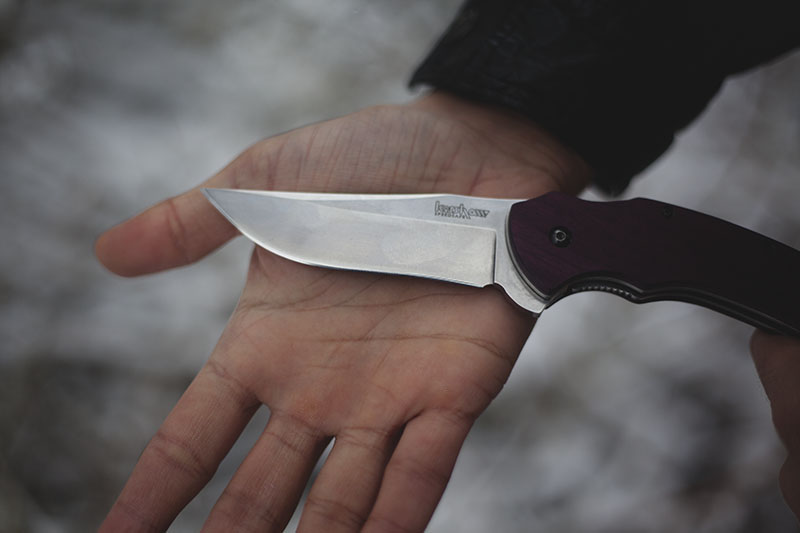 The blade of the Kershaw Tremor is nicely tapered to a relatively acute tip. It’s not a needle by a long shot, but definitely acute enough to make it an excellent option for piercing cuts. 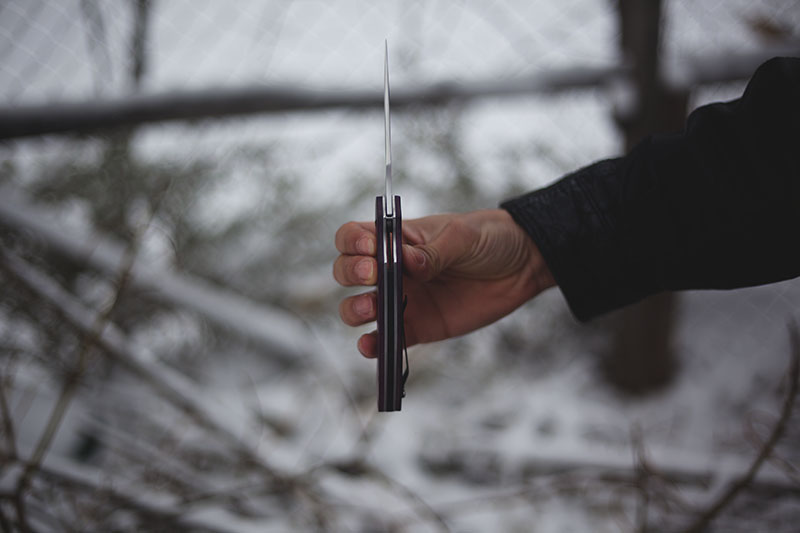 The stainless steel (not 100% sure, but I’m guessing it’s 420J2 derivative steel) engages firmly with a nice thwack. Beyond its initial breaking-in period, I have not noticed any movement or wear in the knife’s liner. In my limited testing, I’ve found no chance of it failing. The assisted opening mechanics of the Tremor also aid in making sure that every engagement is firm, with the tip of the liner mating nicely with the tang of the blade. 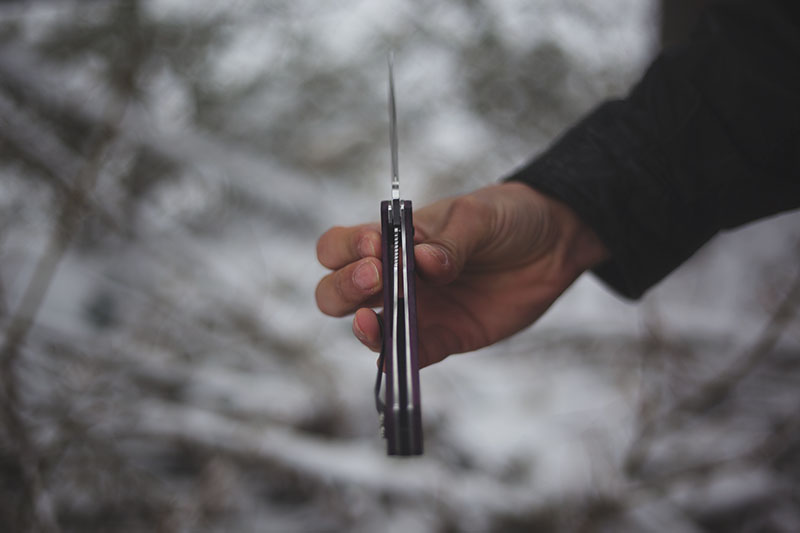 Should the liner fail (which I really don’t see happening), the flipper does act as a guard/choil, and so your digits are always perfectly safe. 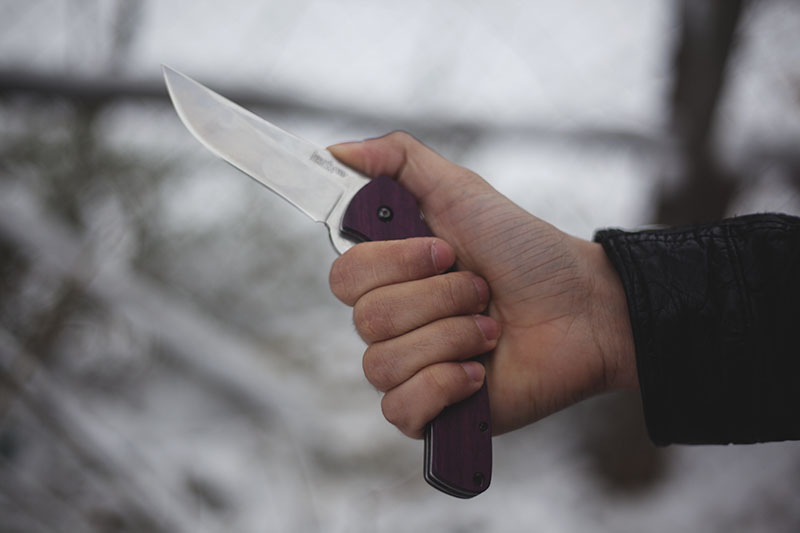 Now on to the interesting bit, the ergonomics on the Kershaw Tremor are very particular. I’ve always said that some knives are designed to have a bias for a certain grip style, but with the Tremor it’s not a bias: it’s a downright prejudice.

The Tremor should be used in a saber grip. Period. Whilst in a saber grip, the handle melds with the palm of my hand, and those off scallops near the top of the knife feel like they’ve been perfectly designed for my thumb. I won’t say that the knife is horrible when used in other grips, just that it feels quite a bit awkward and forced to hold the Kershaw Tremor any other way, so I stick to a saber grip with this one. 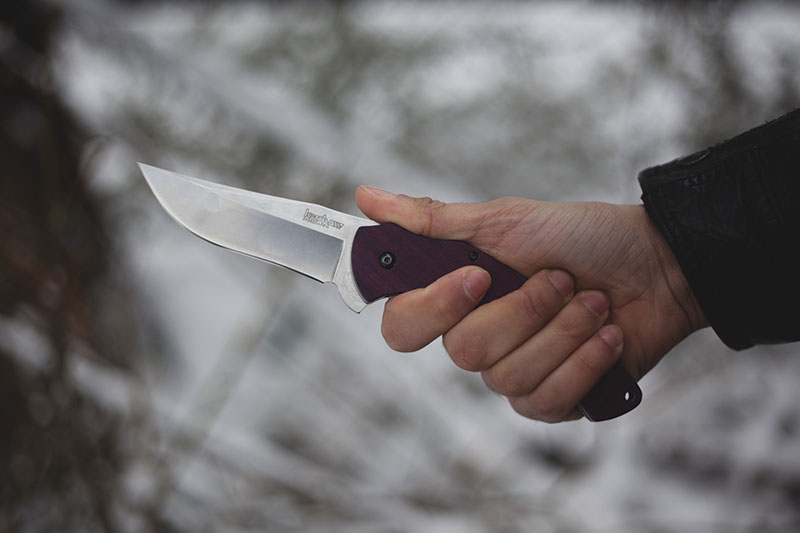 In an reverse grip, the knife is still passable. Even though the butt of the Tremor does not offer a ledge or jimping to rest your thumb, it is not unreasonably uncomfortable, if you had to use the knife in such a way. 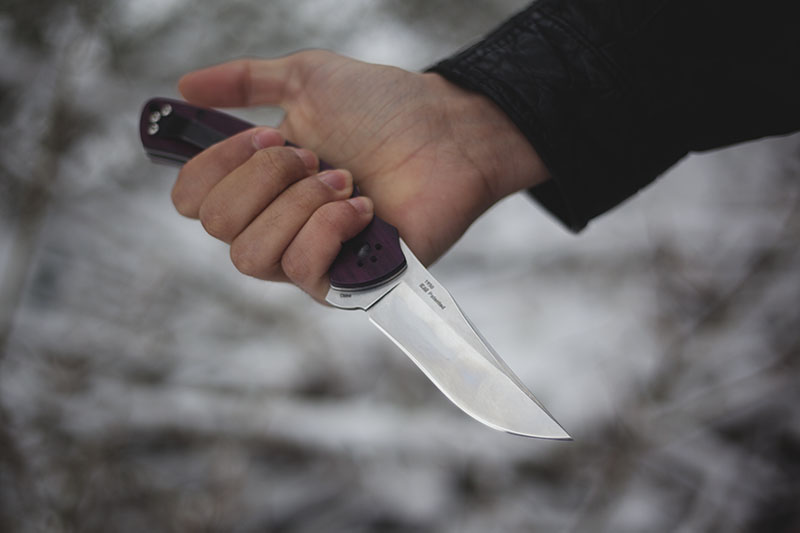 In theory you could use the Kershaw Tremor in a pinch grip, but with the assisted mechanism, I would advise against using it for field dressing or butchering tasks. I’d imagine it would be prone to getting jammed/gunked up and cleaning it would not be as simple as blasting some compressed air through the frame. 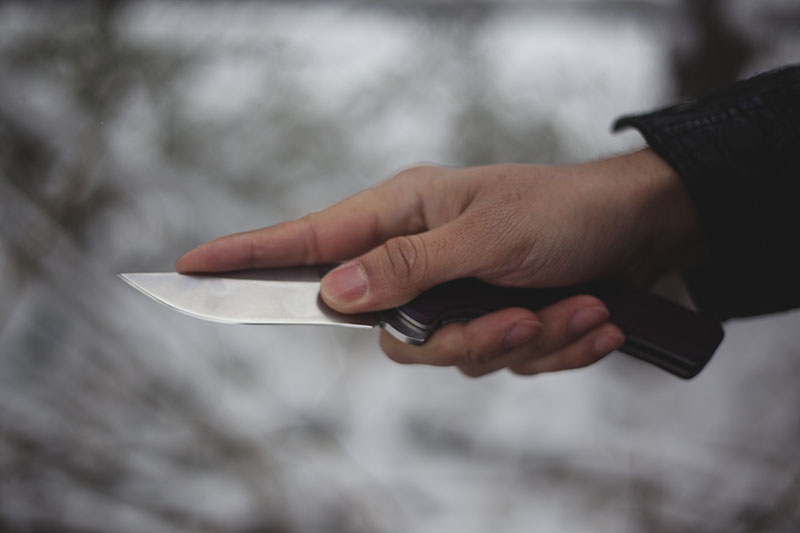 The Kershaw Tremor has a very aggressive grip profile that is reminiscent of old school Bowie knives. Its design is not suited for all applications, and if I am to be perfectly honest, I almost feel like it was designed for dueling. With its blade profile and that wicked tip, I can see how lethal this knife can be in the right hands. Combined with its oversized flipper and assisted opening abilities, I can’t think of many knives that would be easier to open if one got into some trouble.

Kershaw has actually discontinued this knife already, even though it’s still technically available from a few online sellers. I’m sure that won’t be the case for very long, as discontinued knives tend to move fast, and at $20-30, this knife is almost guaranteed to disappear quickly. If this review peaked your curiosity even a little and you’re interested in testing the knife for yourself, fair warning, you should jump on it pronto.