Figuring out which knives and gear have been featured on TV shows seems to be becoming something of a running theme on this blog. We’ve gone through Dual Survival’s knives, Naked and Afraid’s gear, and now we’re on to the knives used in Showtime’s Dexter, specifically those knives in Dexter’s kill bag.

For the first three seasons of the television show, Dexter’s kill bag is pretty much a mess. The knives used vary from episode to episode, season to season. It’s not until the fourth season where Dexter’s kill bag gets pretty much fully sorted out: to the point where he very consistently pulls out the same knives, knife bag, and equipment over and over again from episode to episode.

The order of the knives in the season 4 onward kill bag are shuffled around a lot, thus numbering them off to name them can be difficult because the order really depends on which episode you’re watching.

For the sake of identifying the knives with a visual aid, we’ll be using a screenshot taken from Season 4, Episode 8. You can find a large version of this screenshot (the same one that is pictured below) here. 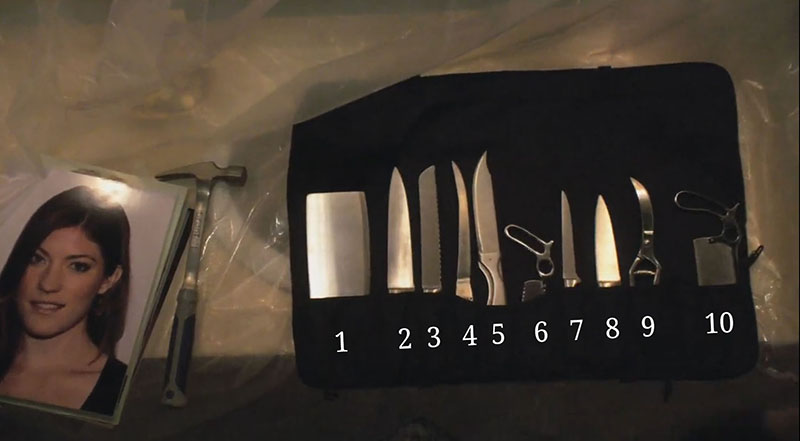 If you’d like to learn more about the props used on Dexter, there’s a really cool video about them that you can watch here.

A huge thank-you goes out to the folks who posted to this thread on The RPF forum for doing a hell of a lot of detective work on this topic. The OP actually has an amazing replica of the kill bag that he pieced together himself – and it looks amazing! You can take a look at that here (you’ll need to scroll down a bit).

If you’ve watched any other television shows that you’d like us to identify the gear for, let us know in the comments! Otherwise, enjoy those reruns of Dexter!