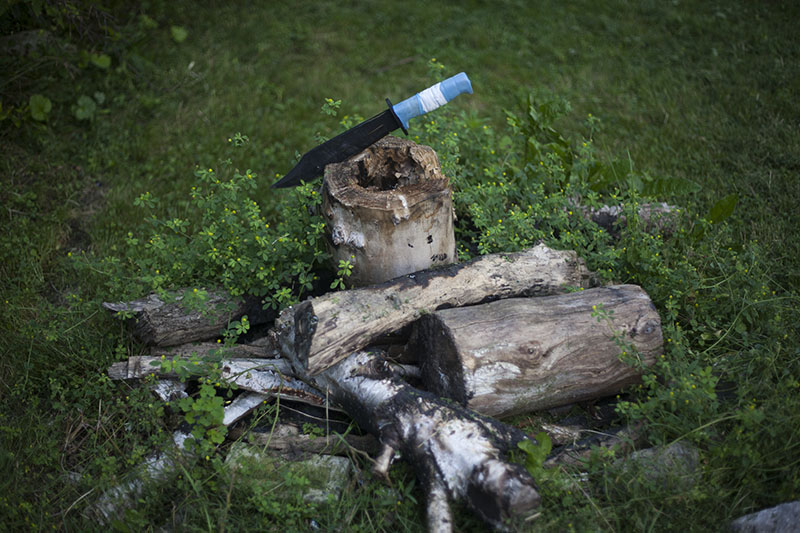 Out of all the knives I own, the Ontario SP10 Marine Raider Bowie is one of my favourites, not because it’s especially functional or excels at one particular task, but rather because it’s 650 grams of fun – and does it need to be said that it looks amazing. It also has a really nice balance point (helped by its hidden full tang construction). 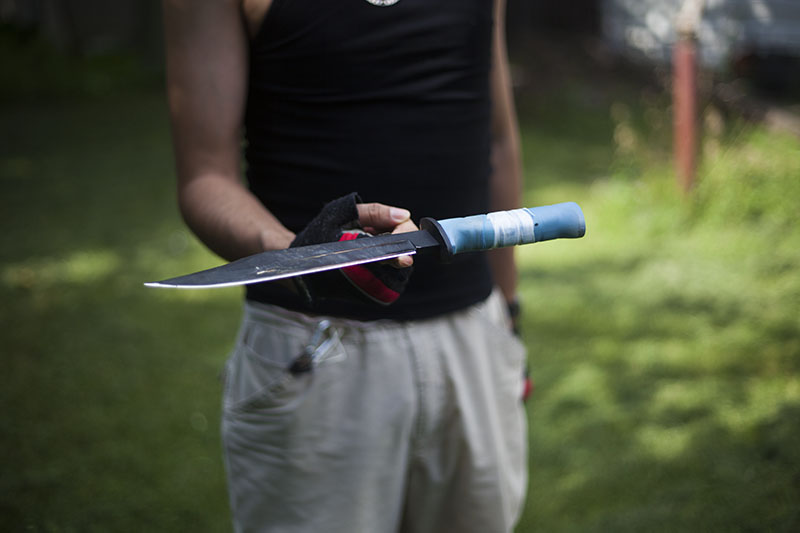 The sheath is very well made. It has good waxed stitching and strong rivets. The material selection is also very well thought out. 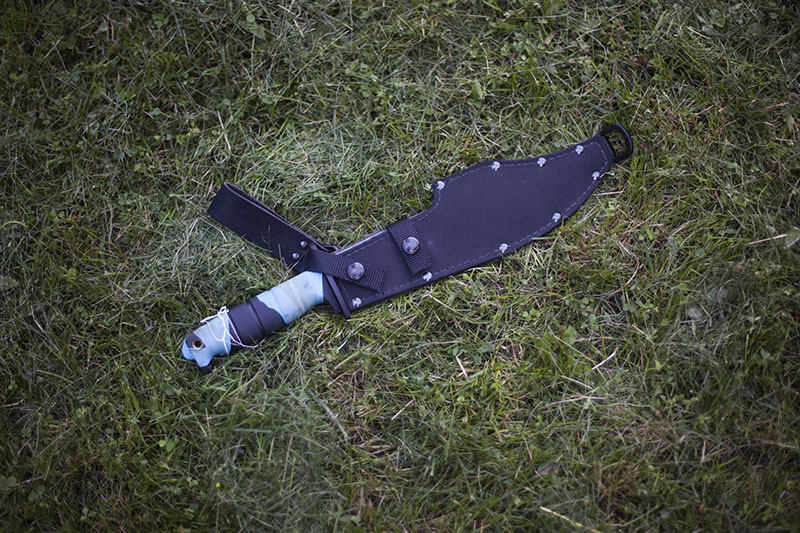 The sheath is composed of ballistic nylon at the front, for general toughness and abrasion resistance, with leather backing so that it doesn’t shred your legs while you’re wearing it. 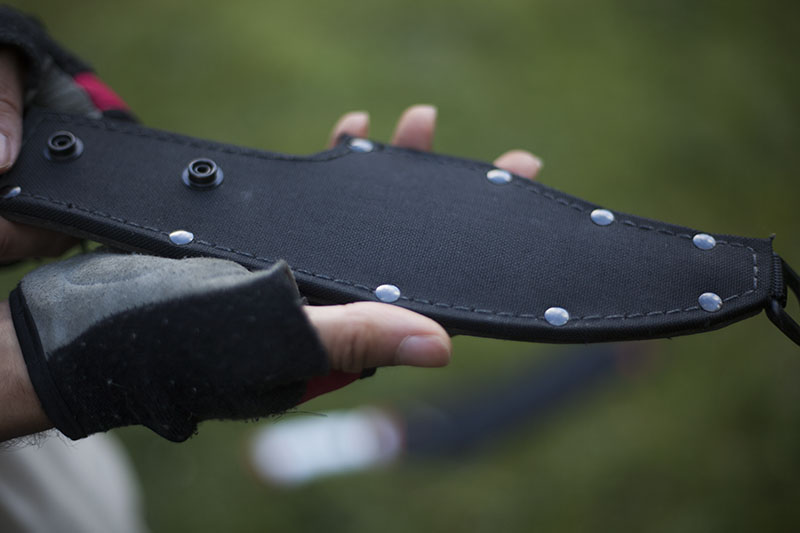 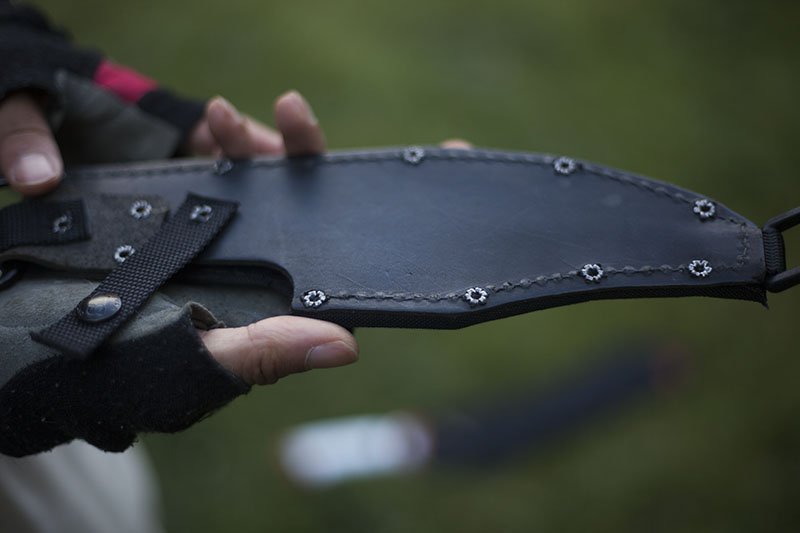 At 22 ounces, I can’t say I would particularly want to carry this on my belt, but in a pinch it’s certainly doable. 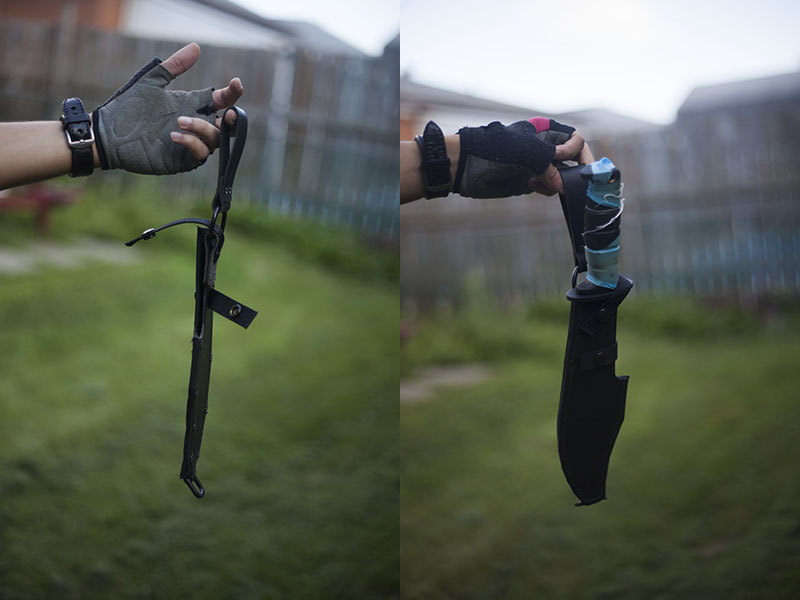 Even with a lean edge, its 1095 blade is a piss poor performer for smaller tasks. The blade starts too far up to choke up on for accuracy. 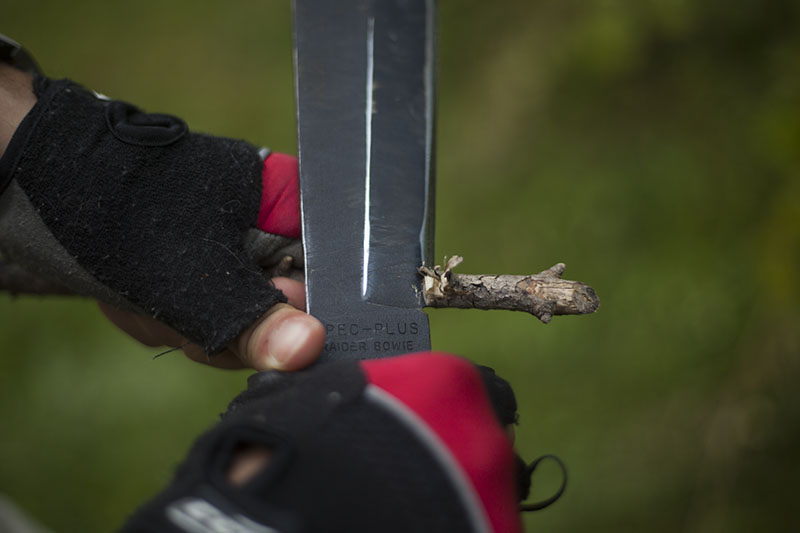 Whenever I need to use this knife for general cutting, I use this specific grip, using my thumb to push. 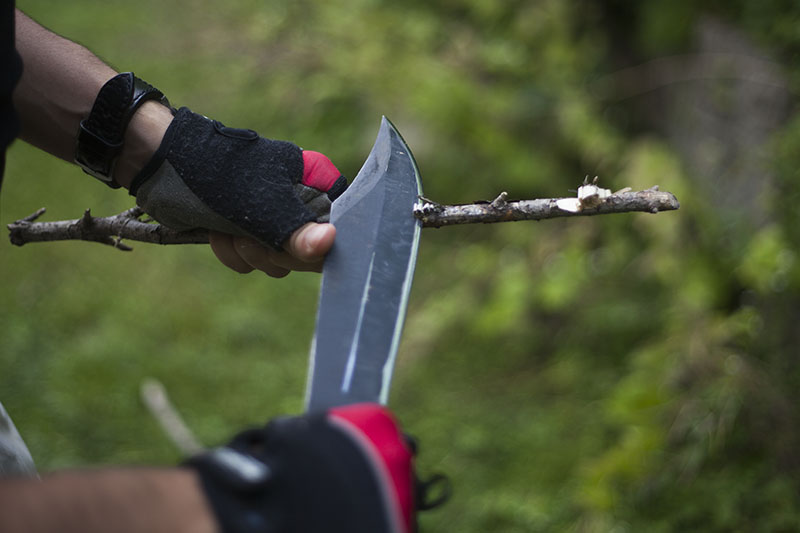 Technically speaking, this knife is a combat knife, but I personally don’t think it would be good for fighting at all. It’s much too heavy to be very practical in combat, though it does excel at chopping. Ultimately, I only use this knife as a chopper, and would definitely advise to others do the same. It can easily go through relatively thick branches in a single swing. 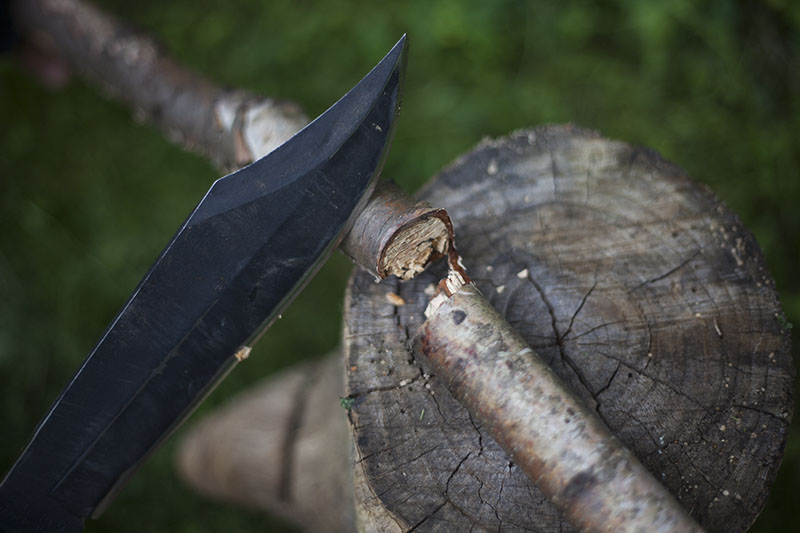 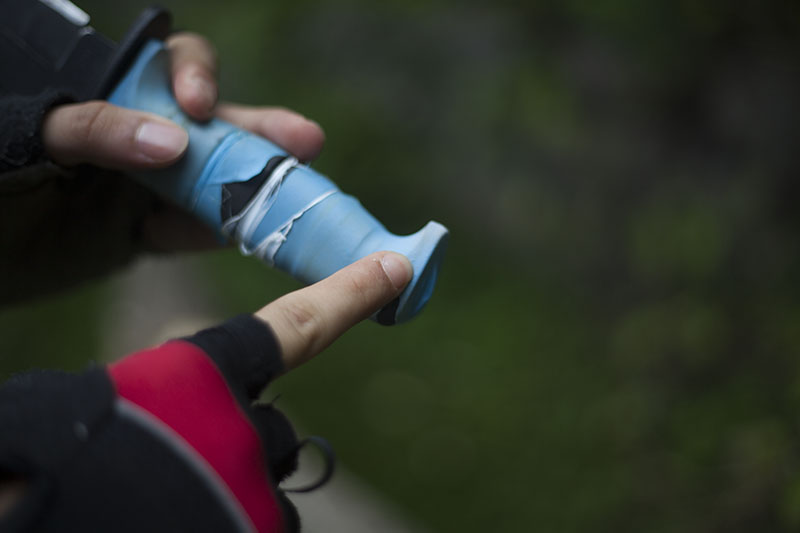 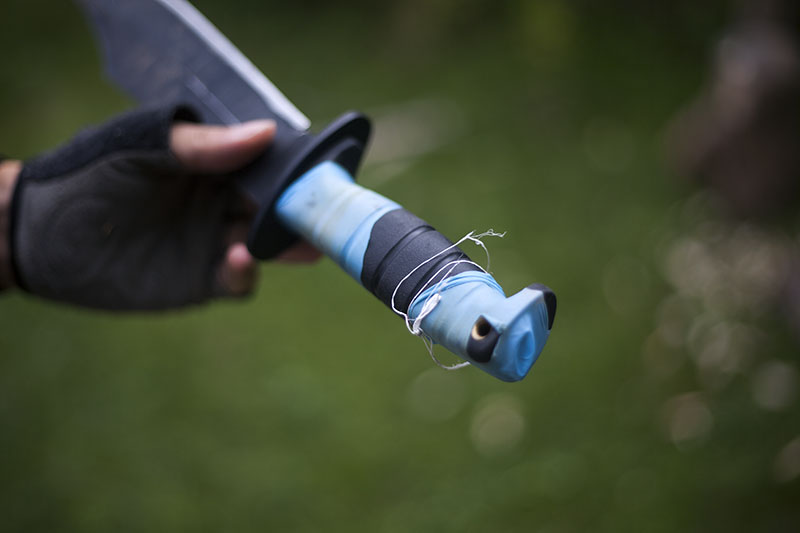 Unfortunately, when chopping it can feel like the butt of this knife is trying to to break your pinkie. A strong grip and some gloves go a long way with fixing this issue. 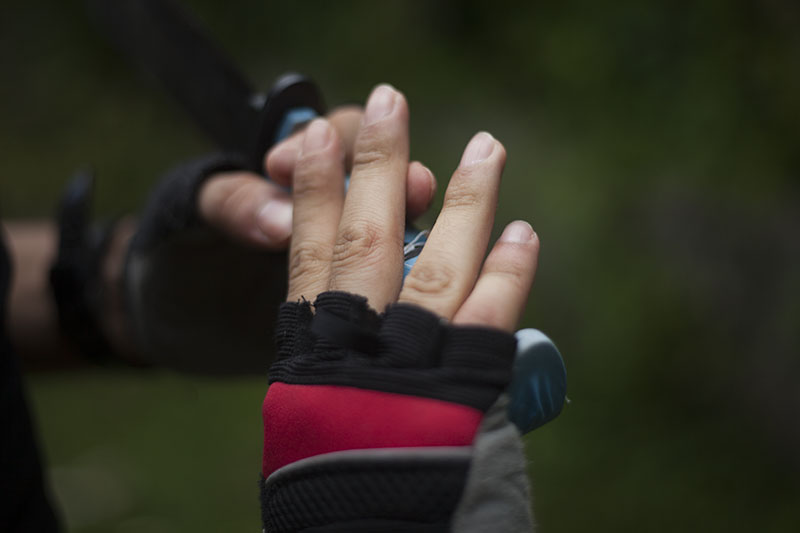 The knife is blade heavy with a quarter-inch spine, which makes every chop very powerful – bordering on visceral, really – especially taking into account that the blade is a mere sub 10 inch, and that the tip is clipped, which reduces the weight. 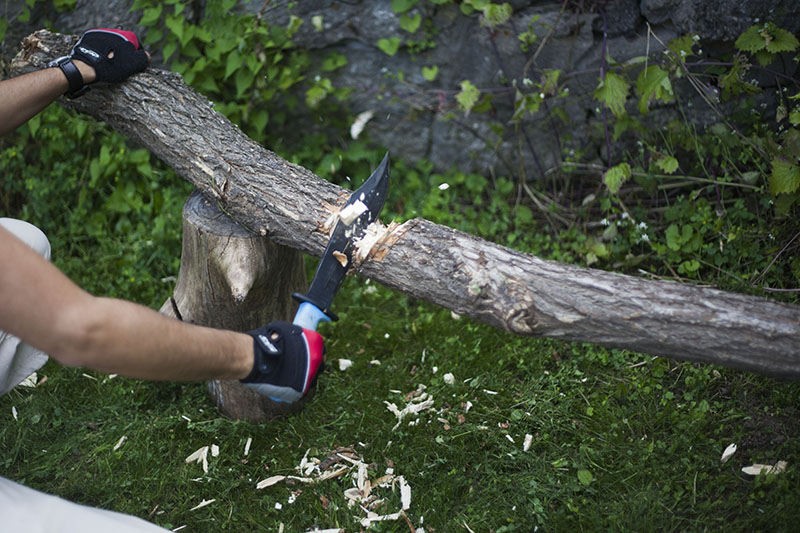 Again, even though this knife is technically designed to be a fighting and combat knife, you would definitely be hard pressed to find someone who would claim it’s a poor chopper. 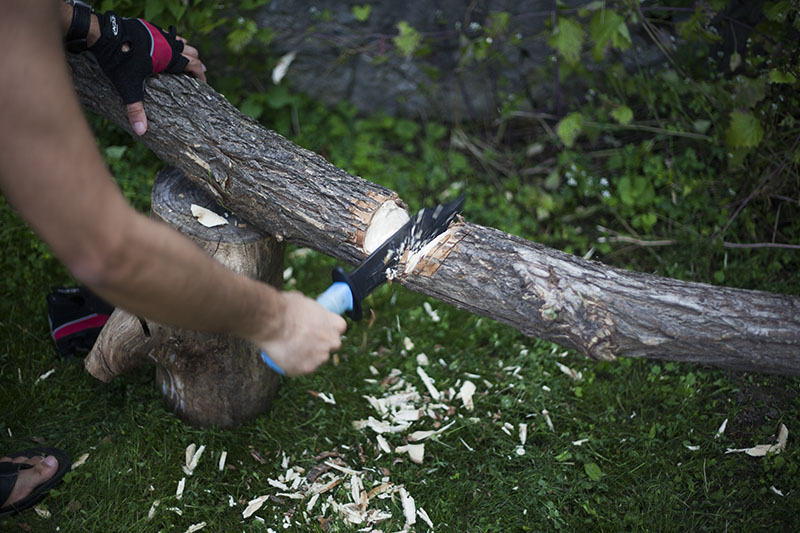 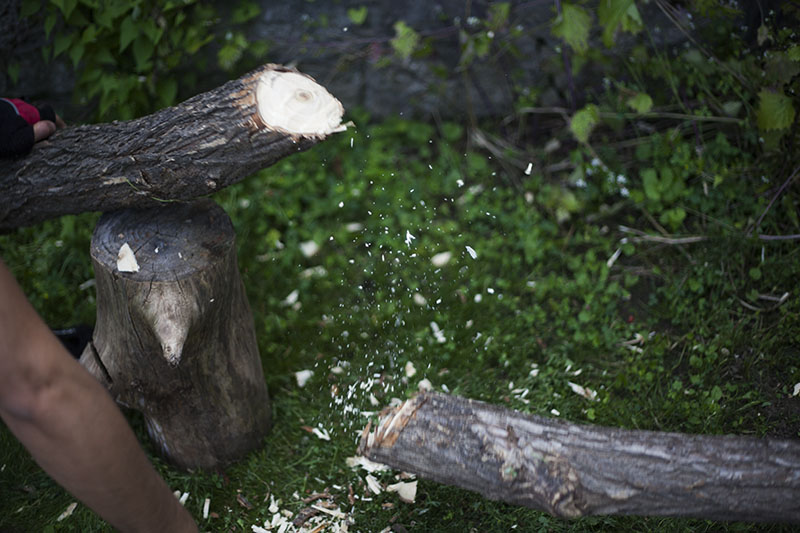 The generous length of the bowie would make stripping bark easy if it were not for the almost sharp clip point. As before, it’s definitely a good idea to wear gloves while performing this task.

The default edge angle was pretty obtuse, so I thinned it out and made it convex. 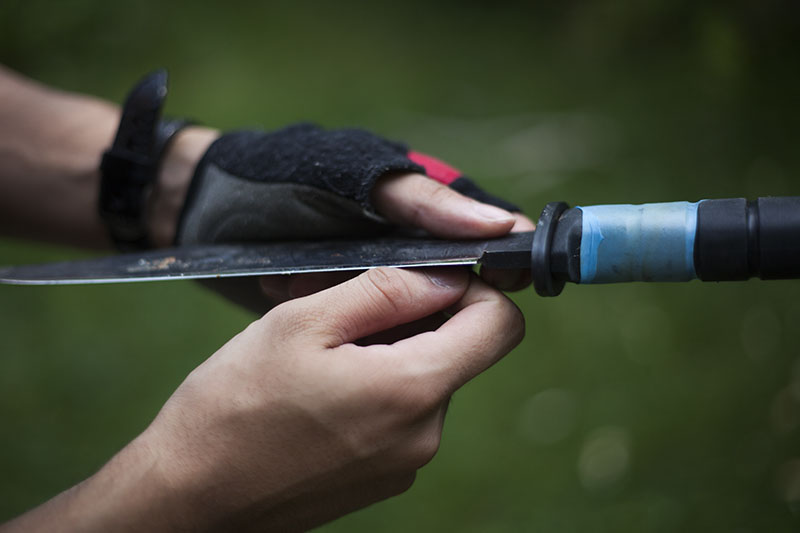 As you can see, the secondary edge on my knife goes back a good 3-4 mm further than the factory one. 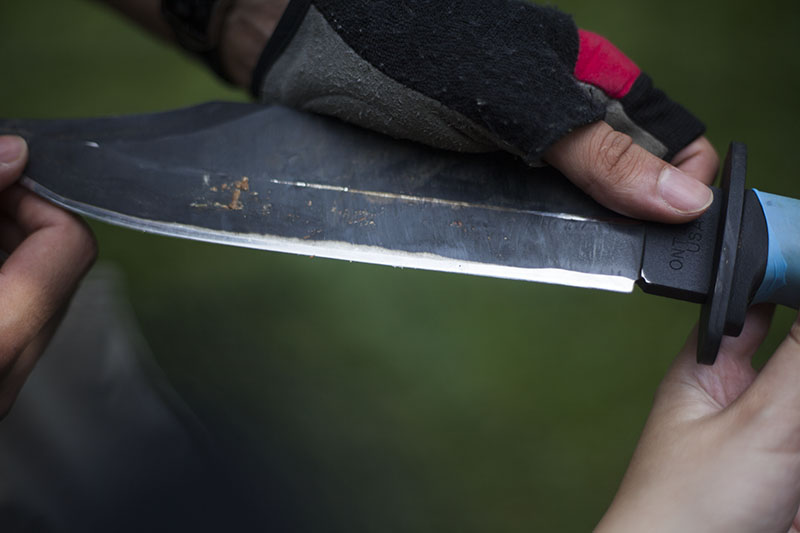 The clip point of the bowie is not sharpened, and yet it’s so lean it wouldn’t take more than 5 mins to put a working edge on. Be careful, however, as the clip will chew up any baton when batoning. 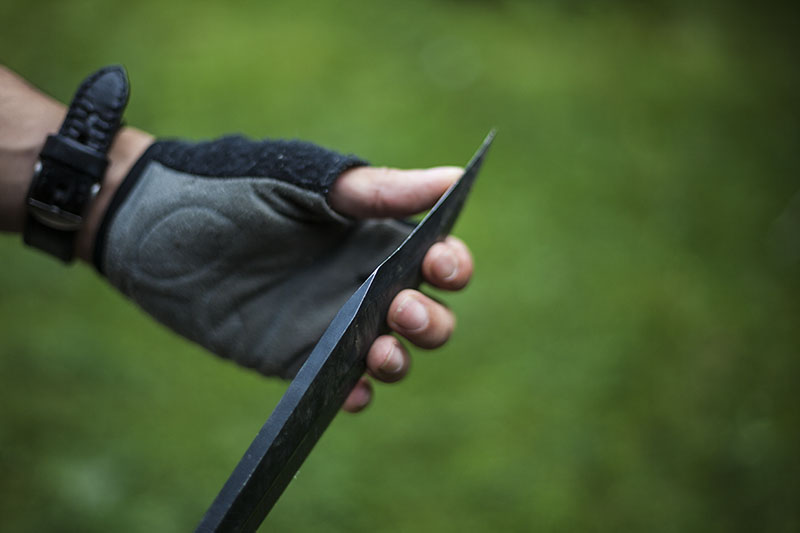 The 1/4 inch stock thickness is beneficial when it comes to batoning, as it allows the knife to split even hardwoods with ease. I can’t find any instances of a Marine Raider Bowie failing under hard use either, so you don’t need to hold back when hitting it. If it wasn’t for that clip point, this knife would be the perfect batoning knife. But seeing as how the clip point chews right through all batons if you get too close to the tip, you have to be pretty careful when using the Marine Raider Bowie as a batoning knife. 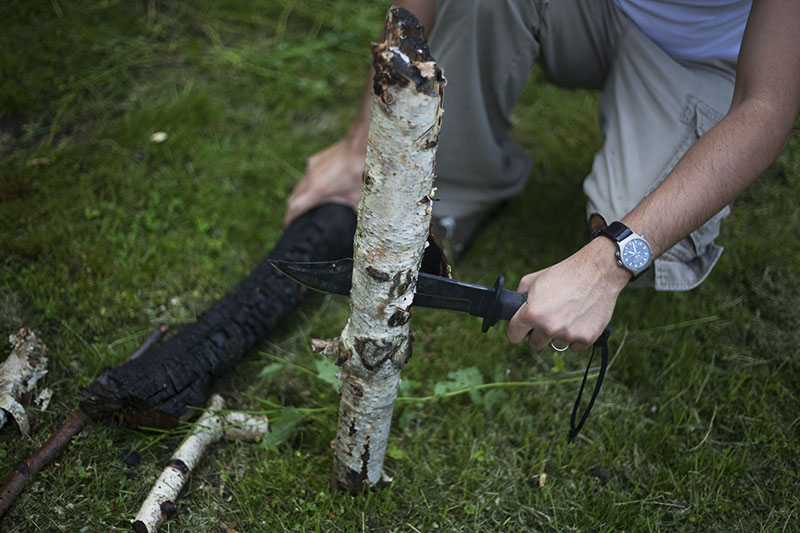 The brass lanyard hole is useful for retention if you’re going to be chopping a lot. 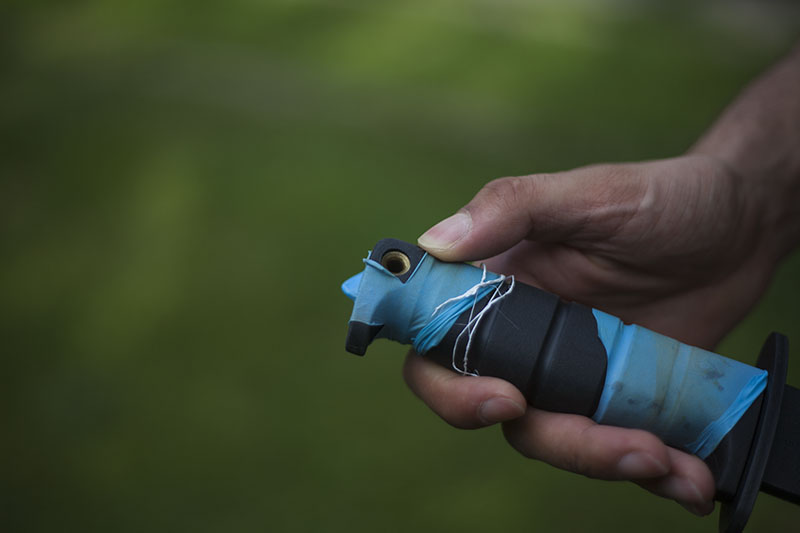 The coating affects its ability to be used as a striker when using a fire steel, so I ground a nice 90 degree bare steel section. That being said, its bulk makes it a bit unwieldy for generating sparks, so if given the option I’d probably use something else anyway. 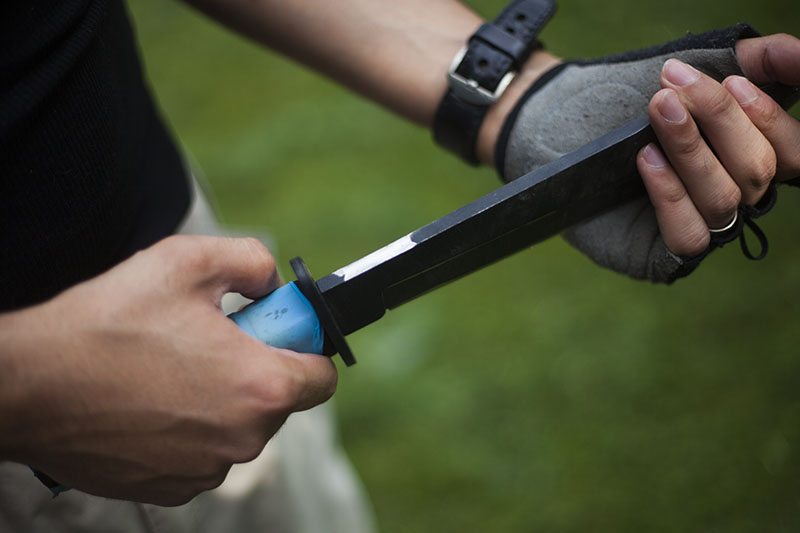 To wrap things up, this knife is a relatively inexpensive hunk of steel with above average chopping ability and a really badass look. It’s subpar for more general use tasks, and it’s cutting ability is relatively low. 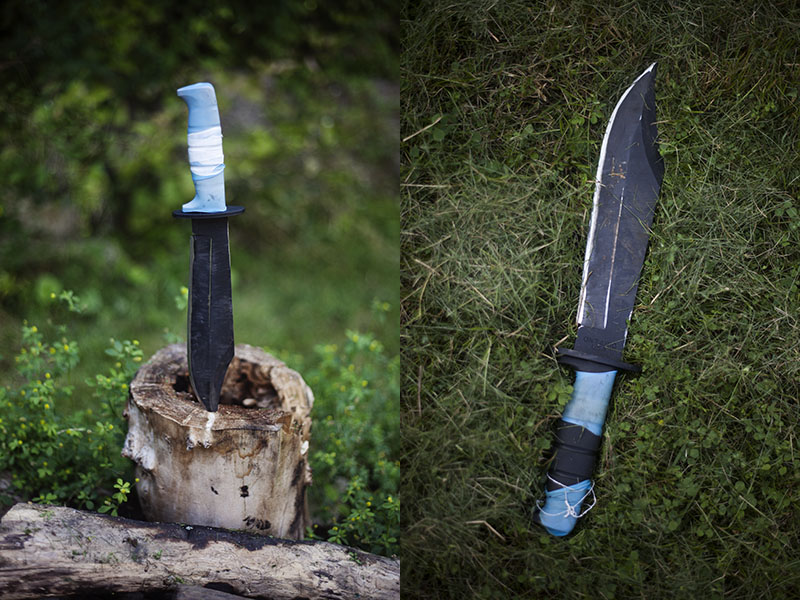 I wouldn’t suggest purchasing the Ontario Marine Raider Bowie as a tactical option due to its lack of speed when wielded, but if needed, you could always throw it in the general direction of the threat – the sheer weight will destroy everything in its path.

Ultimately, as an extremely nice looking, fun camp knife, it’s hard to beat (especially at that price!), so long as you understand that both function and performance come secondary to style and sheer coolness in its case.

But just look at it. How can you deny its aesthetics?