UK knife laws are a minefield of conjecture and hearsay. It seems everyone has an idea of what they can and can’t carry, but in reality, the situation here is both very simple and extremely nuanced depending on the application of the law as per what law enforcement “feels” the law should be.

This is an article that is targeted very much at my fellow Brits. That being said, those of you overseas might get a kick out of learning about some of the nonsense we have to deal with.

British law as it pertains to knives is the perfect example of laws being written by humans out of populist knee jerk reaction to events. We have specific laws that “ban” knives with the word “combat” written on the blade, as well as knives that have zombie themes. This is not a joke, our government really did pass these laws, and yes, I believe them to be as ridiculous as you reading likely do.

In practical, day to day terms, I find that my knife purchasing habits after having moved from Canada back to the UK have not actually changed significantly. My EDC habits of course have, but more on this later. 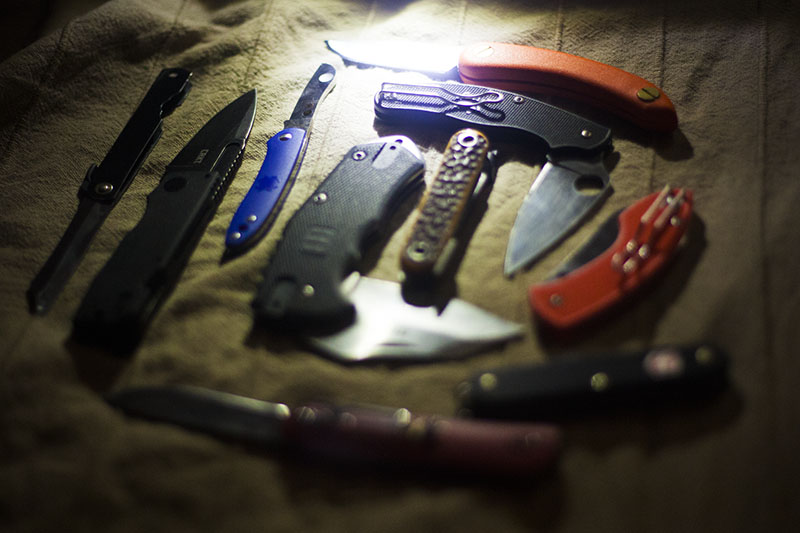 Generally speaking you cannot carry any knife in public unless you have a good reason, and therein lies the conundrum. Back in Canada, I EDC’d my much loved Cold Steel Voyager for general EDC tasks, but in the UK, whilst I think my uses hold a damn valid reason to carry this knife – the police would not. This “perception” clause is why our knife laws are a mess.

A lot of sheeple see something in the news about a teen stabbing someone to death and think – “Why can’t they ban knives?” The reality is that you cannot ban something based on how scary it looks. The anti-gun folk are very similar in that regard as they don’t want AR-15’s because they are perceived as “offensive” weapons, but a bolt action .223 rifle has equal or superior ballistics performance, so banning things based on how scary they look makes absolutely zero practical sense.

UK Legal Knife Clause: Knives You Can Carry Without a Valid Reason

Interestingly, the UK has a clause that allows you to carry a folding knife as long as it meets the following prerequisites. You can carry a knife that meets these prerequisites without any valid reason;

Every other kind of knife will be scrutinized through the eyes of law enforcement on the basis that you have to have a good reason to be carrying it. And of course, law enforcement is unlikely to share our views on knives as tools.

Note: If you’d like to see a list of UK-legal knives we’d recommend, you can do so by clicking here. You can also take a look at all the reviews we’ve published on UK-friendly folders here.

Knives that are utterly prohibited include the following;

I know, ridiculous. Thankfully, due to how broad the definitions are, the loopholes are numerous and in my experience I can buy any knife here that I was able to buy in Canada. 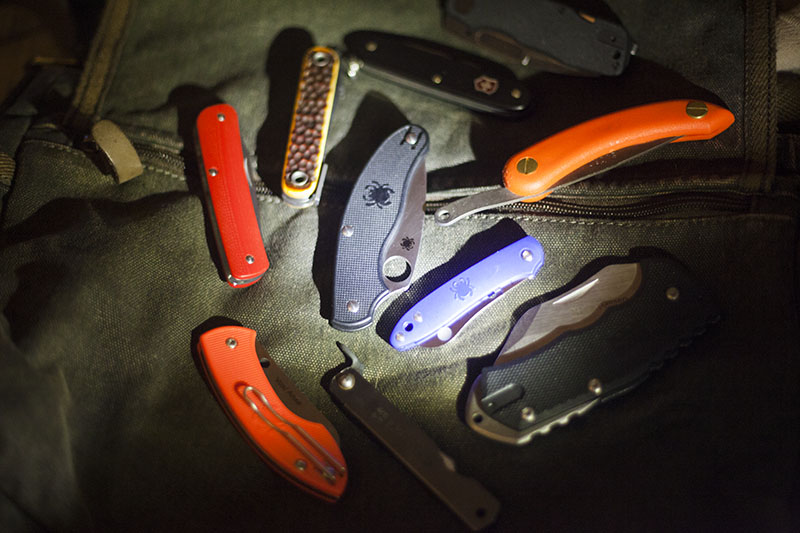 Now, I have been hooked on knives for a very, very long time, and in my youth, I quite happily EDC’d locking Spydercos amongst other awesome tools here in the UK with absolutely no issues. I am not suggesting you do this, but I am merely sharing my experiences.

If you are wondering why I haven’t been locked up by the cops, it’s because I am a generally nice guy, who doesn’t pick fights with strangers, act drunk and disorderly, and quite frankly, I have always treated the police with the respect I expect them to give me. Like much in life, how you act matters a great deal. If you enter a conversation in an abrasive fashion or act in a way that would be considered threatening, don’t be surprised when people respond to you as though you are a threat.

In Canada, which bans carrying knives for self-defence, I already mentioned – I carried ridiculous knives like the Cold Steel Rajah II. I had zero problems. Obviously, this is my experience on the matter and whilst I now EDC “legal” knives, it’s not because I expect something to happen to me, but because as an adult with a family, I have a lot more to lose should I run into a cop who happens to be in a bad mood and wants to be pedantic for whatever reason.

The old adage of not seen, not taken really does ring true, especially when it comes to the UK where one rarely has to interact with the police.

In an interesting quirk, because the law allows for knives (regardless of blade length) to be carried as long as you have a “proper” reason with no real list of what constitutes a proper reason, there is a case to be made that most knives are technically legal to EDC as long as you can rationalize it. I strongly suggest you do not try to make this case, however, as your fate will be decided by the Crown Prosecution Service who may not be as amused as you. But let’s take Ray Mears, for instance. He is a renowned bushcrafter who quite happily carries a fixed blade knife around in the woods (notably, still in public), because its his job, and thus what he does is legal and perfectly justified.

But what about someone with Parkinson’s who could argue that a locking knife is the only safe option for EDC due to tremors making a slip joint inherently dangerous? It’s an interesting question to consider, though sadly, I shan’t be the one pressing anyone to test this out, as I value my freedom and expect others value theirs as well. 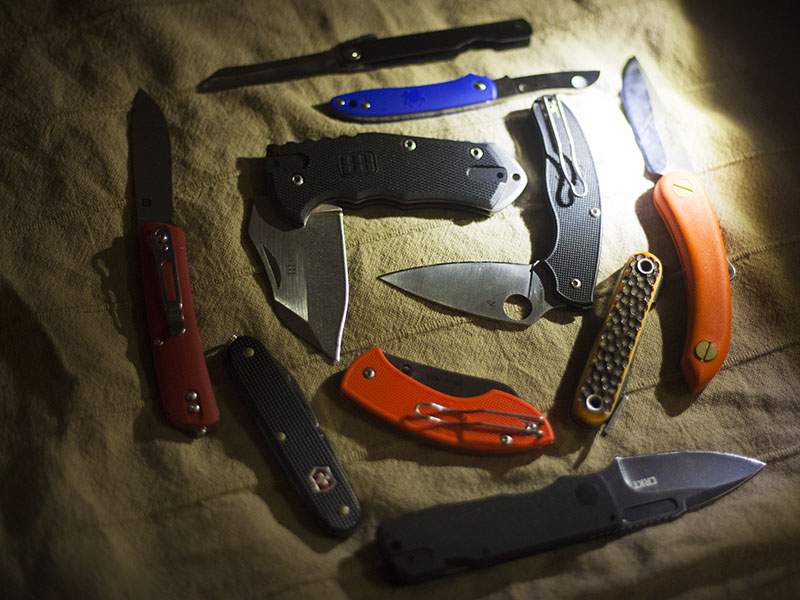 So yes, UK knife laws, like most laws created by bureaucrats, are pretty stupid. You can’t buy a folding knife on eBay, but you can buy a 9 inch chefs knife. The lack of foresight is horrifying, but frankly, expected in this day and age.

The UK outright “bans” some knives, sure; automatics, push daggers, gravity knives, and balisongs are banned, but that’s much like Canada with its ban of autos and balis. What makes a knife UK-legal, however, has to do with that knives-you-can-carry-without-a-valid-reason clause we were talking about above.

The pragmatic reality is that collecting knives as a hobby isn’t substantially impaired here. I can buy pretty much anything I want and freely use it on private property. The only real limits one faces in the UK with regards to knives are related to EDC, and even then, as I’ve mentioned – only in public space. I can’t say I am particularly happy about the direction my country has taken with regards to public safety and its knee jerk legislation, but in day to day life, I find myself being impacted far less than I previously would have thought.

As always, life is what you make of it. I could whine endlessly about not being able to EDC an oversized Cold Steel folder, but I instead just focus on what I can EDC, and make the best of it. 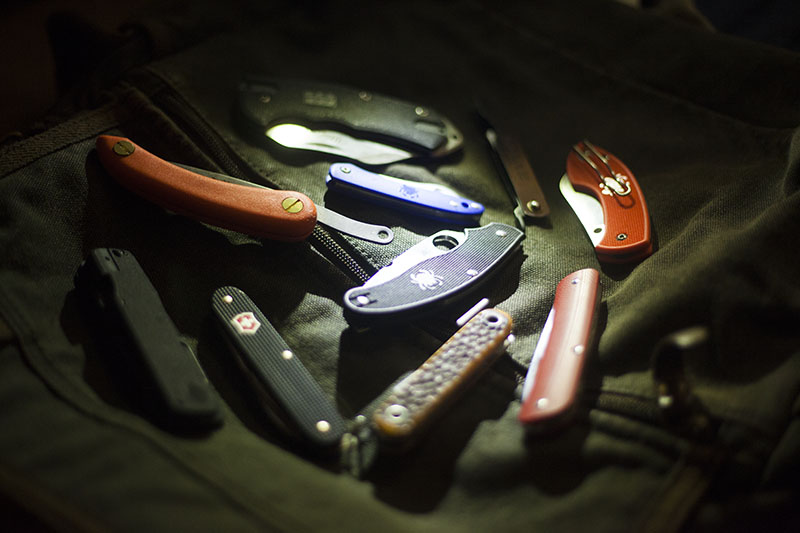 I’ve already got a list up of what, in my opinion, are currently the best UK-friendly folders, so check that out if you’re at all interested.

You can also check out all our reviews of UK-friendly folders on this site if you’ve already seen that article and would like more options to go through. We’ll be adding a lot more to this section of the blog in the years to come since we’re now officially on British soil and are here to stay. Obviously, we’ll also be adding non-UK legal knives as well (they can’t stop us from carrying what we want on private property!), but definitely will be buffing up the UK-legal section.

What Do You Think About UK Knife Laws?

Live in the UK – how do you feel about the UK knife laws? Do you find they impact you on a day-to-day basis more than they’ve proven to impact me?

Do you buy non-UK friendly folders and just use them on private property or do you steer clear of them completely?

And if you’re not in the UK – do you have weird (impractical) knife laws in your country/state?

Let me know in the comments!