Although Valley Food Storage is certainly a reputable, staple (heh) manufacturer of long lasting prepper/survival food, when they contacted us about doing a review of one of their products, I have to admit, I wasn’t exactly enthusiastic about the taste testing. You know, seeing as how dehydrated food is – well… dehydrated food.

Elise was a lot more optimistic. We’re both fans of chili in this household, and she thought the Mango Habanero Chili would at the very least have a nice kick to it. Considering the shelf life of 25 years, a small hit in the flavour department is certainly warranted, and if we were going to be into any long-term storage dehydrated food, we figured that Valley Food Storage’s offerings were the place to start. 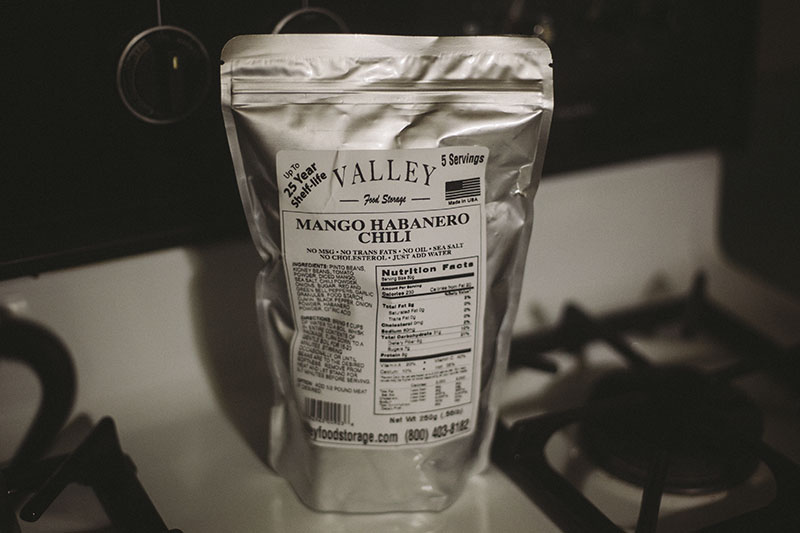 The dehydrated food comes in a standard resealable pouch and happens to be nitrogen flushed – which goes a long way in keeping the food ready for use for up to 25 years. I mention its expiry date for the second time because its damn impressive. Part of me wants Valley Food Storage to send us another pouch so we can revisit this review in 25 years time.

Aesthetically speaking, as soon as I opened the bag, I was quite impressed with how the meal looked. It definitely passed the smell test. These dehydrated meals are certainly bona fide chili; no question about it. 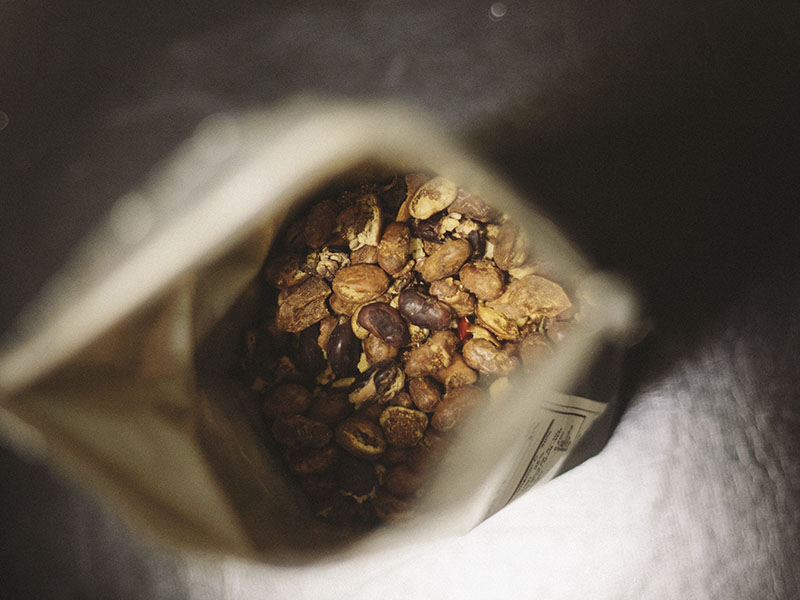 So based on my highly scientific method of looking at the sample whilst prodding and sniffing, I can tell you that the Mango Habanero Chili pouches are mostly filled with pinto and kidney beans, with a couple of chunks of dehydrated mangos. All this is drenched in some sort of red powder, which I presume is tomato/chili/miscellaneous seasoning. Like I said before, smells good, which gave me a bit more optimism than before I opened the pack, though I was still definitely skeptical.

Speaking of seasoning, it’s written on the bag that this pack is 100% MSG, trans fat, oil, and cholesterol free. Very good to know. As far as survival food goes, Valley Food Storage apparently keeps things pretty damn healthy. I also like that the pack doesn’t contain artificial preservatives or flavorings (as far as I can tell). It’s a definite bonus. Good job, Valley Food Storage! 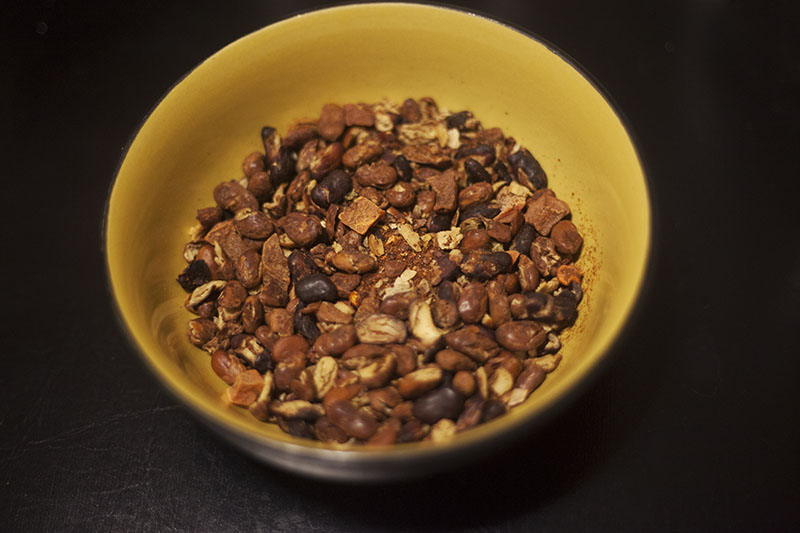 The instructions for cooking are very straight forward.

I’d like to mention that what you’ll see me cooking is exactly half of the pack – not even the whole pack. The pack says it’s 5 servings, so out of that we only cooked 2.5. Keep that in mind, especially if you thought the quantity was a little low – it really isn’t. Quite a decent size. 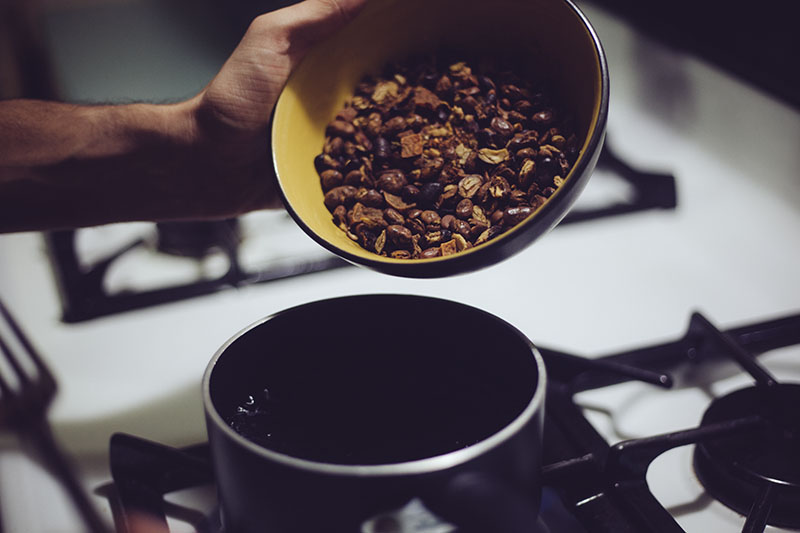 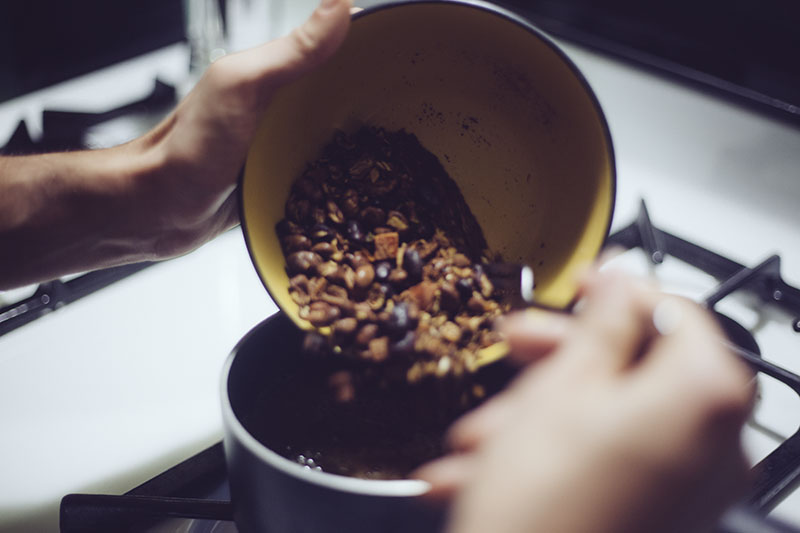 Cooking the dehydrated Mango Habanero Chili was a bit strange for me considering I hadn’t ever cooked dehydrated food before. I wasn’t quite sure what to expect. The smell throughout the process was quite nice, and (dare I say) “authentic” – smelled like what chili should smell like. The texture, however, worried me more than a little bit and even sent shivers down my spine. The first few minutes of stirring were filled with watery and gritty texture, but the more I stirred and waited the more chili-like it became. The transformation in 20 minutes is actually remarkable, and by the end, before I even tasted it, all my hesitation toward taste testing vanished, and was replaced by curiosity. 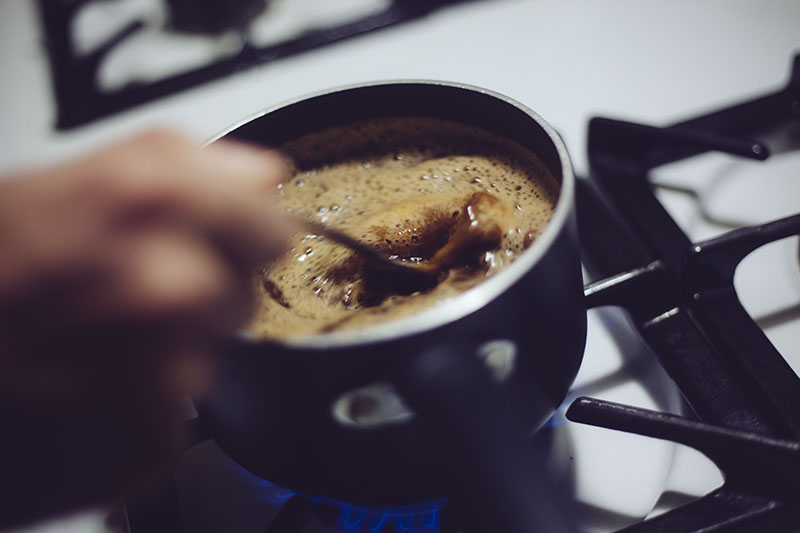 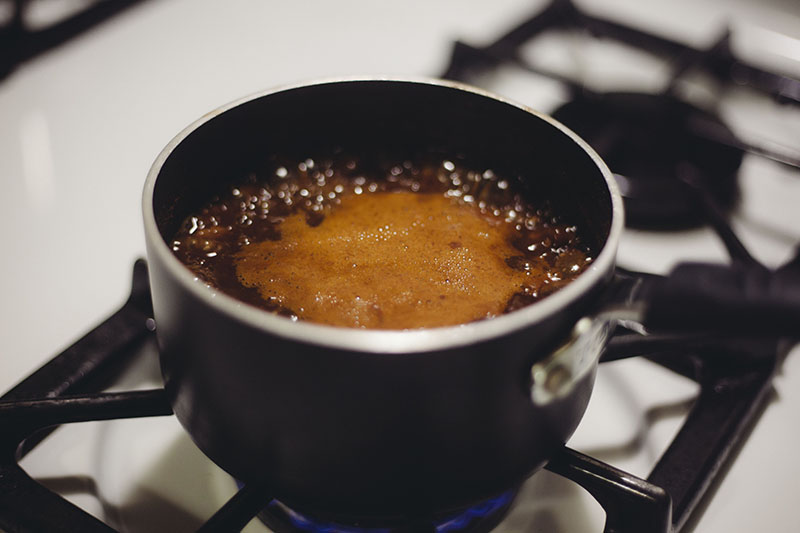 By the end of the cooking process, the texture was thick and somewhat creamy. Not a dairy sort of creaminess, but a starchy, rich one. Going from a couple of beans and some powder to this as a final product is really very cool. I can honestly say I didn’t expect the final product to look this good (or good at all if I’m being 100% honest). That’s some pretty appetizing dehydrated chili. 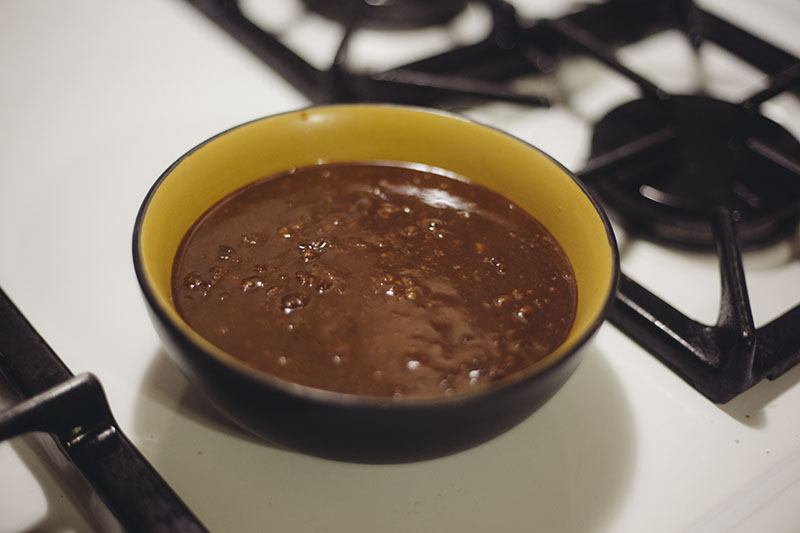 Initial taste test features the humble nacho chip. Flavor is of a medium-hot chili. It does have a nice kick, though not over the top in the slightest. The mango is not particularly prominent, but once in a while you will bite down and chomp down on a chunk, which provides a nice change of texture. The mango is definitely a plus.

Overall, I would say the flavor profile and texture is a pleasant surprise, and I wouldn’t turn my nose up at it should it be offered to me, even if it weren’t an emergency. 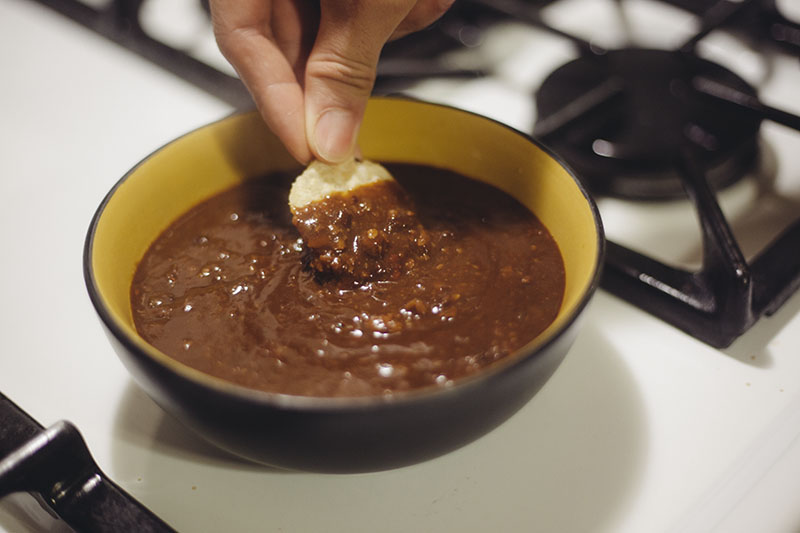 With the original taste test out of the way, I started thinking about how to make this meal even more versatile and substantial from a post-SHTF perspective. While meat, if one isn’t hunting, may be a little hard to come by, if one has a decent stockpile of survival foods, that will almost always include some rice, and I know that many homesteaders have chickens in their backyard for the regular eggs they produce. As such, Elise cooked up some basmati rice for some carbs, and I fried up some eggs for additional protein to give the mix a shot. 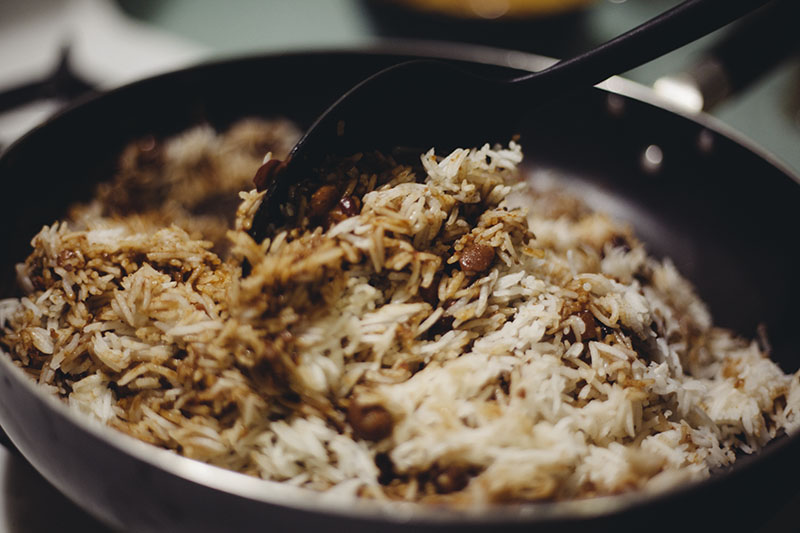 When it comes to the chili + plain rice combination, I can’t say I am a fan. Elise didn’t like it much that way either. The flavor profile becomes washed out and loses all complexity so that you end up with rice, chili sauce, and sporadic beans. The dryness from the rice also makes this attempt at a fuller meal a bit tedious to eat. You definitely need to add more ingredients to make the rice with the chili packet a viable option in the taste department.

Considering all that Vitamin A and C, as well as the Iron and Calcium, along with all the other good nutrients found in Valley Food Storage’s Mango Habanero Chili, I daresay this would make quite a decent (and healthy!) base. If you’re thinking of throwing in some fresh vegetables (if of course you’ve gotten that prepper garden started), and even better, meat (if you’ve gotten your hunting/livestock game on), those would certainly be welcome additions to the meal. 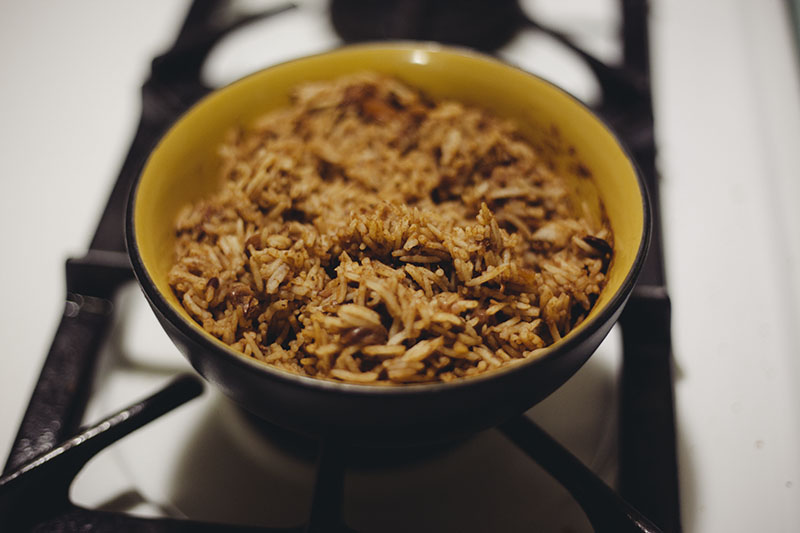 The eggs help from the perspective of texture, though again, the flavor was just too diluted for my liking. It’s certainly workable, however, and as I’ve said, the base makes it easy to throw a variety of vegetables and meat in if you’re interested. If I had the choice of how to eat this, I’d either crack a spoon out and just shovel it down (tastes great that way), or have it with corn bread/nachos if they’re available to me. Perfectly palatable out-of-the-bag, and certainly tastes better on its own than with rice!

Of course, don’t take the fact that it doesn’t taste all that great with rice as a mark against the product. That wasn’t a part of the given recipe – just something we wanted to test. And of course you’ll get those few who will insist that it may not taste the greatest, but in a SHTF situation, are you really going to care how good your meal tastes? That perspective is true, of course, but there’s nothing better than a tasty meal as a psychological pick-me-up in an emergency situation, and since this dish tastes great already on it’s own, there’s nothing stopping you from cooking rice on the side and eating them both by themselves if you really need the extra carbs. 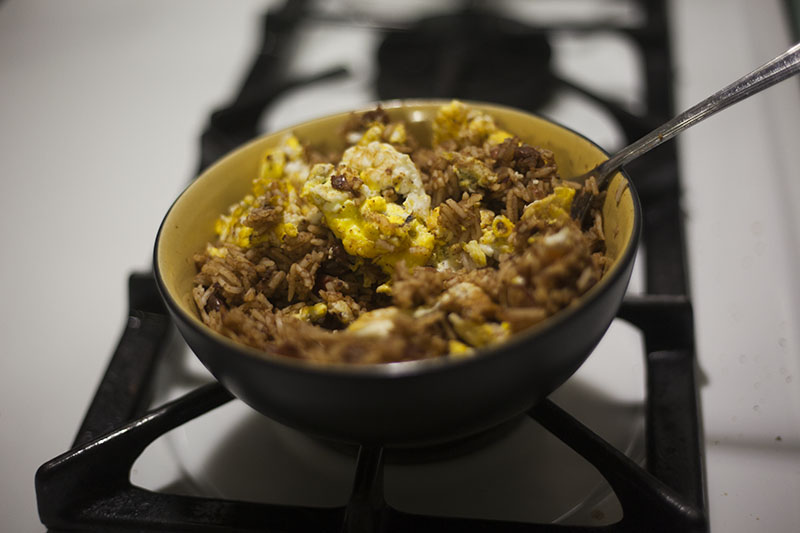 Like I said in the beginning, we only ended up cooking half the packet (so 2.5 of the 5 servings), and with the rice, the portion was plenty enough for dinner for both myself and Elise. 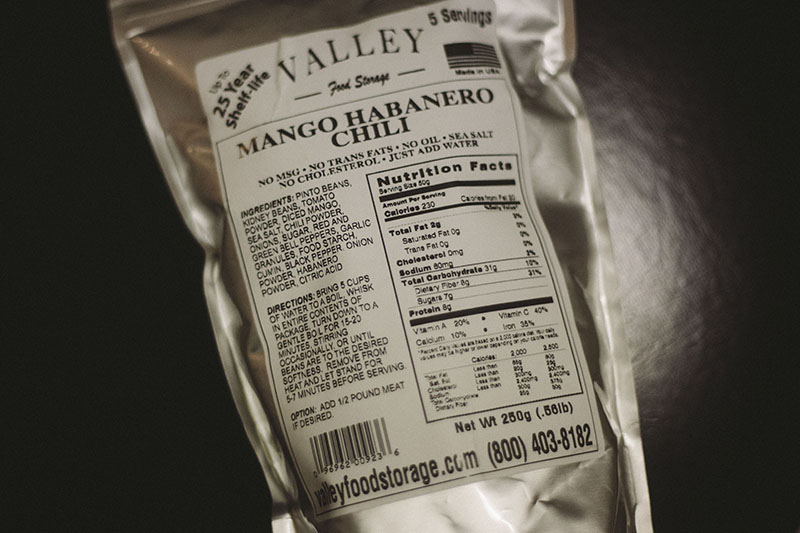 Flavor-wise, I wouldn’t ever compare this to a legit, freshly cooked chili, but it’s not pretending to be. Valley Food Storage’s Mango Habanero Chili is straight up prepper food, and for a dehydrated meal, it actually has quite a lot more flavour than I’d expect.

Ridiculous 25 year shelf life and plenty of nutrients to keep you and your family going, not only does Valley Food Storage deliver on the basic sustenance front, but it does so in an appetizing fashion. You can always use the chili as a base for a bigger meal if you want to incorporate other survival foods from your prepper pantry into the mix, but I’d not recommend just mixing with rice and leaving it at that. Doesn’t mix all that well with plain rice, though the chili + nacho chips is a 100% winning combination.

I’m actually strongly considering getting a few of these to stack up in our cabinets for non-SHTF purposes, as they’re perfectly viable for a late night meal. If you like to rotate through your stockpile like we do, eating this won’t feel like a chore, especially if you add meat to it. Grab one and give it a shot. If you’re stocking your shelves for the SHTF and are a fan of chili, you won’t regret it.

Note: If you’re interested in buying Valley Food Storage products, but would prefer to buy directly from them (rather than through Amazon), Valley Food Storage has graciously provided the readers of More Than Just Surviving with a permanent 10% discount on their products. Just use the coupon code “morethanjustsurviving10” (no quotations of course) at checkout!