We’ve got a really straightforward reader question to be answered for today that comes from one of our long-time Twitter followers, moriel73®!

Hi. Can you help me to make my Altoids emergency kit?

Altoids survival kits have been a mainstay of the survival community for many years – and for plenty good reason! These ubiquitous tin mints can be sourced from nearly anywhere, and that all-too-well-known container that the mints are housed in offers a discreet form, useful in and of itself for survival, with enough storage to pack plenty of small-sized survival goodies.

I did intend to scribble down a guide at some point, but thanks to moriel73®’s question, this article’s coming out sooner rather than later! 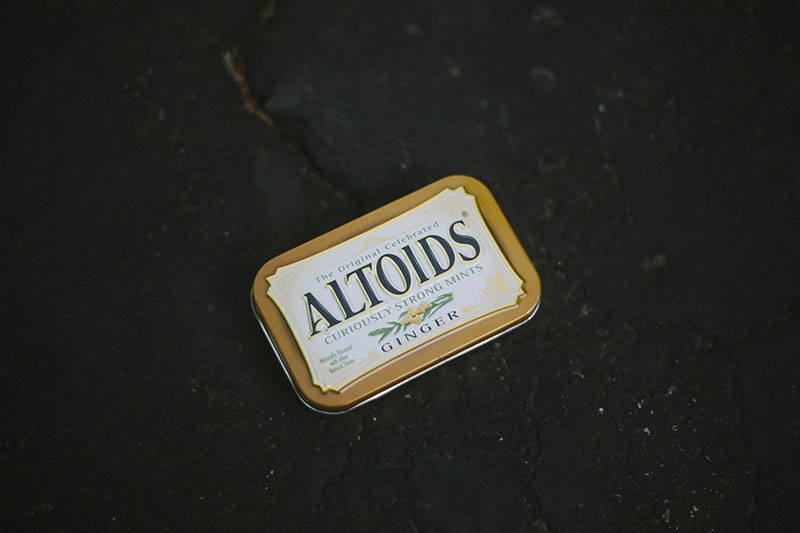 A Word Against Pre-Assembled Survival Kits

Quite a while back, I discussed the contents of a commercial/ready-made survival kit that came packaged in a pocket-able tin around the same size as an Altoids tin. The gist of the article is my firm belief that one should be going out and making their own compact survival kit, rather than purchasing one from a retailer. The article hones in on my dislike for “pre-assembled” survival kits, as well as how much crap gets bundled into them under the guise of offering numerous “features” for buyers.

The core issue with the pre-assembled crap is primarily this advertising gimmick that’s typically played: packing in more items (in terms of sheer number) than the competition, rather than focusing on providing good tools, even if they’re less in number, that would prove extremely useful in survival situations. A good example would be throwing in a dozen band-aids and a razor blade instead of the far more useful single large wound dressing plus a small quality pocket knife.

Obviously, commercial survival kit assemblers have economic realities and can’t offer the best tools without jacking up the price considerably, but at the end of the day, this is precisely why I encourage everyone to assemble their own survival kits.

All this to say – if you want your own small survival kit, you’re going to want to make it yourself. Not only to save on cost, but also to be able to control the quality of the products that you’re supposed to be trusting your life with! 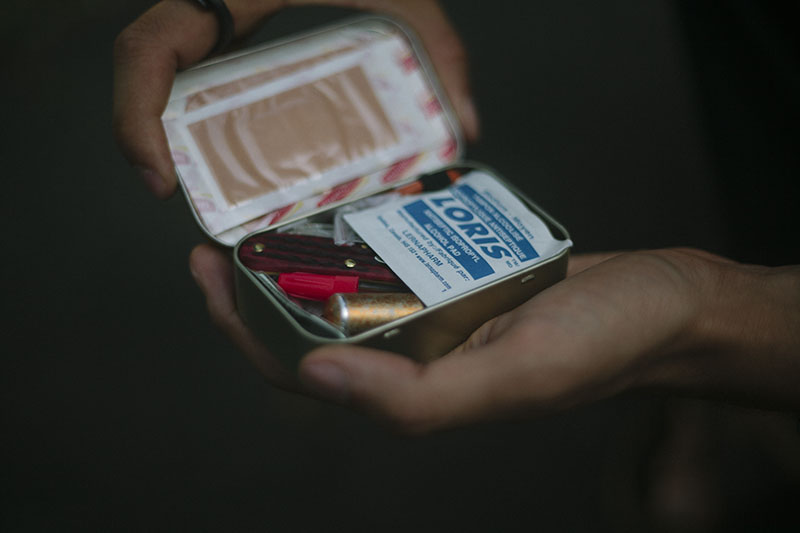 The very first thing to do before assembling your kit is to think about your environment (in terms of what you will need to survive in that environment), and the nature of the space you have. An Altoids tin is both annoyingly small and surprisingly large! With some elbow grease and smart organization, you can really pack in those items, but you are always limited by sheer physics and that’s something you should plan out at the earliest stages as opposed to having to cut a bunch of items later because, say, the knife you chose was too big.

Try finding the smallest items you can without having to sacrifice utility, usability, or practicality.

The goal of the Altoids survival kit, as you well likely already know, is ultimately to cram as much useful stuff into as little space as possible. When finished, you don’t want to have the items rattling inside due to empty space (ideally), whilst you still want to be able to access everything should you need to, and to do this you will need to carefully plan things out.

The exact method of your plans for your Altoids kit will vary on your choice of items, but generally speaking, you want to pack both the bottom and the lid with large squishy items like bandages to act as a soft buffer, and then place your more awkward items (like superglue and rolls of tape) as the obstacles the rest of your gear will have to navigate around to fit into. It really is worth experimenting with different methods and item choices to get a kit that works perfectly for your environment, and that has all the options you want.

I know that some people also pack two Altoids tins – one for first aid items and a second for all other survival items, but I don’t bother doing this as I feel it defeats the point. If you’re going to carry one compact item, the Altoids tin survival kit is ideal. If you’re planning on carrying two of them, they become less than compact, and it’s easier to carry a small survival bag than two Altoids tins at that point. So I would definitely stick to having just one. 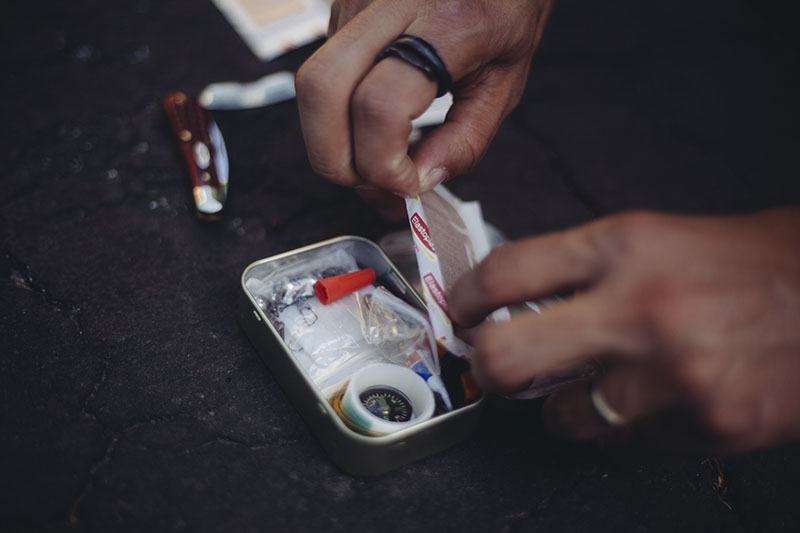 How to Choose the Contents of Your Altoids Tin Survival Kit

Now that we have discussed the most important factor, which is the container and its packing limitations, let’s go over the particular items you’ll want to throw in!

My personal kit is based on my own environment and the realities of my everyday life. I live in the city, where it’s more likely that I’ll be needing medical help than help getting food or water, so whilst I have the basic fishing kit and snare wire thrown into my Altoids box survival kit (due in large part to how little room they take up in my kit), I personally focus more on the medical supplies than bushcraft gear considerations.

If you live far outside a city this should likely be reversed. If you’re more likely to get lost in the wilderness than you are to get into a car crash, your Altoids tin survival kit should be adjusted accordingly. Everyone has their own environmental factors to consider, and what may work for me may not work for you. So as always, view my personal survival kit as a broad guide on what to include in your own survival kit, and not as an absolute rule to how they should all be. 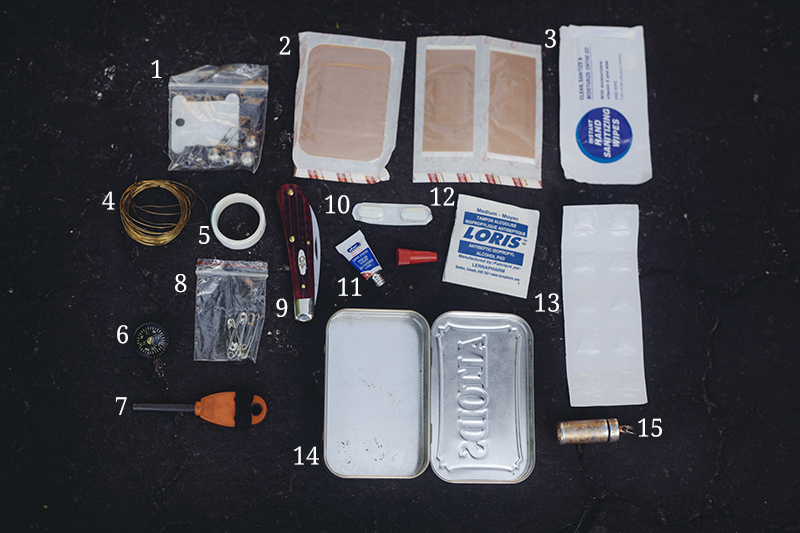 So what exactly did I put inside my own personal Altoids survival kit? Take a look at the picture below and the points underneath for a breakdown of the items.

My kit is designed to pack everything with very little wasted space. I keep the core items like my folding knife easily accessible for convenience’s sake, as I’d probably pull out the knife more often than anything else, and I don’t want to constantly be rearranging. I see a lot of these mini survival kits that are packaged like a jack in the box. Honestly, I hope those who pack their Altoids tins so tight will never need to use them, because in a real emergency, I imagine if they open them, half the items will find themselves on the floor.

Ate something that’s not sitting well with you? Slip out your emergency Altoids kit and pop an Imodium. Cut yourself accidentally? Clean that cut and bandage it up! Don’t let the cut get infected because you were “saving” the contents of your Altoids tin survival kit for a “bigger emergency.”

Its all about real world situations and being prepared for them. I am a firm believer that having an inconvenient kit, one you wouldn’t want to open and use, is nearly as bad as not having a kit in the first place. 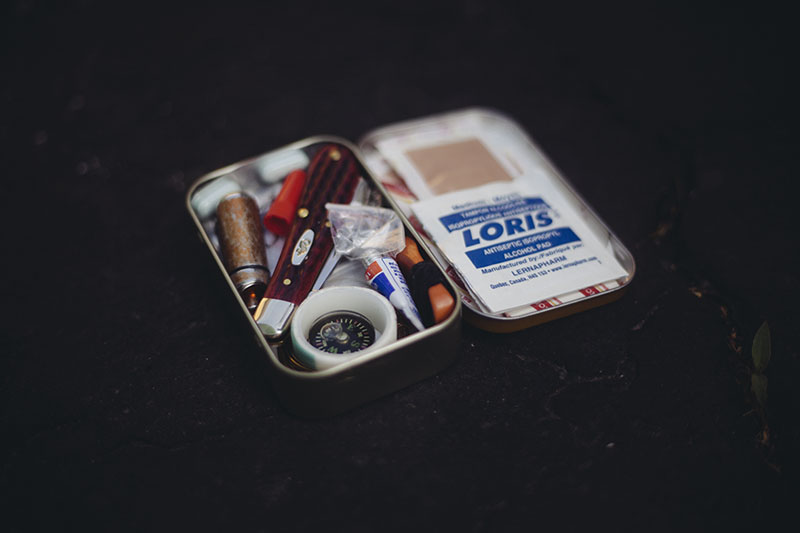 Alternative Items to Add to Your Altoids Box Survival Kit

I will reiterate that depending on your situation the items or even the order in which you pack your kit will change significantly. You can replace the knife with a multi-tool like a Swiss Army Cadet, or perhaps you might want to throw in some allergy caplets if you have particularly bad allergies. Sugar pills would be especially helpful if you (or someone you see regularly) is type 1 diabetic. Get headaches frequently? Keep your migraine medication in your Altoids survival tin. A twenty or fifty dollar bill might also come in handy for you to throw in if you’re in the city like me, but are maybe a little more likely to forget your wallet at home. Think about your life, what emergencies typically take place, and how small items you can place in your Altoids tin emergency kit can help you get out of those emergency situations. Then pack accordingly.

The “Best Way” to Make an Altoids Survival Kit

I will always caution against marching to someone else’s drum. I do not know your life as well as you, and thus, I could not possibly know what the very best, absolute most ideal configuration for your Altoids survival kit would be. I can only advise you by telling you what I have done for myself, and why you might want to adjust depending on your own environmental conditions. Only you would be able to come up with the very best configuration of items for you, as you know more than anyone else does what might go wrong in your life.

Anyone who claims to have the “best way” of making a survival kit is just plain wrong right off the bat. The best way is different for each and every single person. It really depends on a multitude of factors – environment, comfort, personal health conditions, and what the most likely emergencies are to happen to you. Nonetheless, I hope reading through this guide has helped to open your mind up to possibilities for items that might be good to start with.

What Would You Pack in an Altoids Tin Survival Kit?

Do you have one of these? What do you pack in your own kit?

Think you might add anything to your kit based on what I recommended? Feel as though I’ve forgotten some useful items?

Let me know in the comments below! 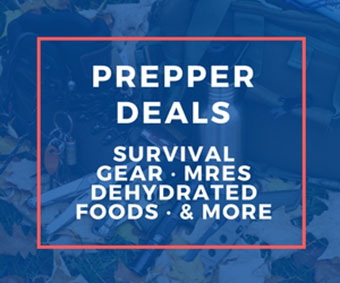