If you’ve stuck around this blog for any amount of time, you’ll have noticed that I have reviewed a truckload of knives. As a consequence of this devotion to sharp objects, I very frequently find myself with nicks and cuts of all sizes (curse you assisted openers!).

Rather than defaulting to using bandages to seal those cuts, I’ve instead found myself becoming very good friends with superglue over the years. I find that I tend to favor using superglue over bandages (or even stitches!) as super glue provides a quick solution that allows me to keep using the limb with the cut with very little discomfort and no (or limited) scarring.

I firmly believe that super glue is one of the best options available for sealing cuts. It’s not ideal for sealing all cuts, but for most cuts that people end up with on a day to day basis (small- to medium-sized straight cuts that were caused by paper, the use of kitchen knives, etc.) super glue does a better job than any of the alternatives. 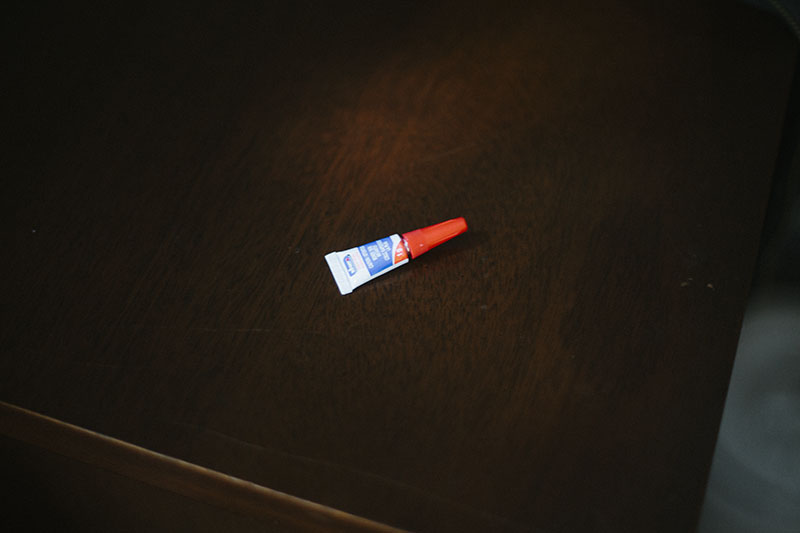 Now I know that there is, quite frankly, a high level of doubt within the general population with regards to whether super glue really works for sealing cuts (let alone with regards to whether it should be used in this way), but I’m here to try to set the story straight. If experience has taught me anything it’s that some genius way of doing something can be lying right under people’s noses and often unless it’s culturally acceptable, people won’t ever bother to try it. I’m almost guaranteed to get glares of confusion (and concern!) when I tell a new person how I sealed the fresh cut I just got yesterday with a bit of super glue. It took me hours to convince my in-laws that this was a perfectly viable way to close cuts, and my grandmother still feels uncomfortable with the idea to this day.

And now of course for a disclaimer: just because a (handsome) guy over the internet tells you something is completely okay, doesn’t mean that you’re no longer responsible for your own actions. As with everything in life, the buck stops with you, so do your own due diligence and when in doubt always seek professional advice.

The following article is my opinion only. I am not a medical practitioner and take no responsibility for how you use the information contained within this piece.

A Brief Background on Superglue and Cuts

Superglue is an acrylic based resin called Cyanoacrylate (CA). It is sold under many different brand names, from Krazy Glue to Loctite. It was invented in the 1940s/1950s during the war effort, but found uses beyond being a mere fast acting adhesive during the Vietnam war.

Super glue was originally created in 1942 in an attempt to use the material to make clear plastic sights for the guns being used in the war. Cyanoacrylate failed at this purpose because it was just way too sticky. But while it is a myth that super glue was originally invented as a way for soldiers to close their wounds on the battlefield – it does seem to be true that, historically, super glue was re-appropriated to be used in such a way. It seems the soldiers in the Vietnam war were often patched up using super glue, though by medics and not the soldiers themselves, and only in order to stop the bleeding long enough to carry the wounded away.

The primary advantage of super glue is that it works fast (instant glue is a well deserved moniker). It also creates an impermeable seal that is resistant to the environment (including water) and leaves behind little to no scarring. 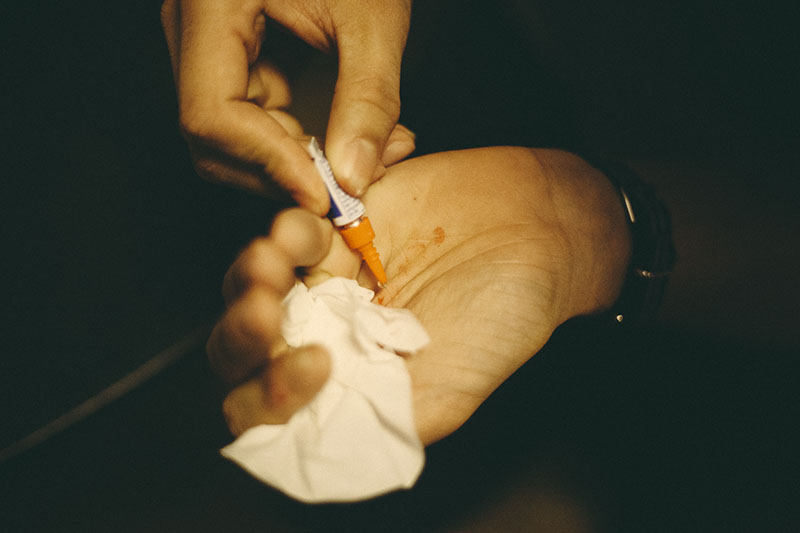 What Kind of Superglue Can Be Used to Seal a Cut?

Super glue is a common term to describe a household adhesive. The medical stuff is quite a bit different and spawned due to two significantly adverse side effects;

As a consequence of these side effects, new adhesives were invented to minimize these reactions that are designed expressly for medical and surgical uses. They come in 2 common compositions from different manufacturers, but all have increased strength, generate far less irritation when used on skin, and are much superior when it comes to flexibility – which as you can imagine is quite useful!

1. 2-octyl cyanoacrylate (rated for the closure of wounds and surgical incision and as a barrier against common bacterial microbes)

2. n-butyl cyanoacrylate (Very similar to  2-octyl but less rigid, more flexible, and consequently not as strong)

These 2 types of medical grade superglue should really be the ones you use for medical applications. “Regular” super glue – like Krazy Glue or Loctite (methy-2-cyanoacrylate or ethyl-2-cyanoacrylate) are not designed for with medical application in mind, and thus the previously discussed side effects, as well as greatly reduced flexibility, make them an inferior choice for sealing cuts.

I will say, however, that I have used regular Krazy Glue with no issues, but that was my decision and I would not recommend it, especially since the medical stuff is so easily available. If you want to do things on the cheap, you can always use the veterinary equivalents (Vetbond, LiquiVet, Surgi-lock, Nexaband, etc.).

With that said, if you have nothing else around, and that cut needs to be sealed, I wouldn’t be too worried about using a dab of Krazy Glue.

When Should You Use Super Glue to Seal a Cut?

Paper cuts and light cuts from sharp knives are the best candidates for super glue over the use of band-aids. The small cuts typically heal completely over the span of 24 hours.

Also use super glue only when you are comfortable doing so. If you are worried you won’t be able to super glue your cut properly – say your hands are shaking or you just don’t feel confident you’ll be able to do it by yourself – pass and use a bandage or stitches, or seek medical help from a professional instead. Don’t ever do anything you’re uncomfortable with. Cuts can get infected and infected cuts are dangerous. 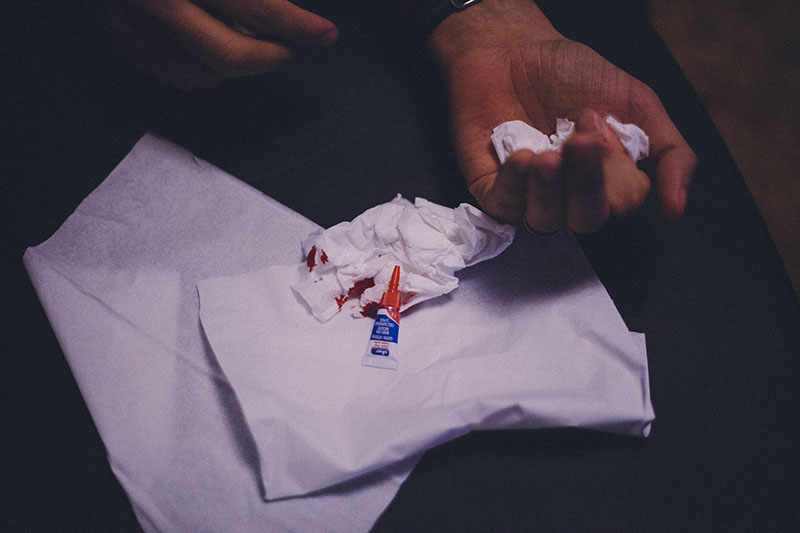 When Shouldn’t You Use Super Glue to Seal a Cut?

This will be controversial because I use super glue to seal wounds that are much larger than recommended by medical professionals, but I will suggest you follow official guidelines – which are basically to only use super glue on cuts less than 5 cm long and that happen to be straight. Jagged cuts or tears, like the types often made by falling or cutting yourself on a dull knife, are not viable for sealing shut with super glue, therefore, as per official recommendations.

According to the medical guidelines, you should also never do the following;

I would also recommend that if you work in an unsanitary environment or an industrial park to simply pack the wound with Vaseline or other soaked dressing and go to a medical facility to get it professionally cleaned and sealed should it require it. Don’t take chances with cuts. Infections are serious and what looked like an simple scrape that would heal in no time could go awry if you do end up getting an infection. 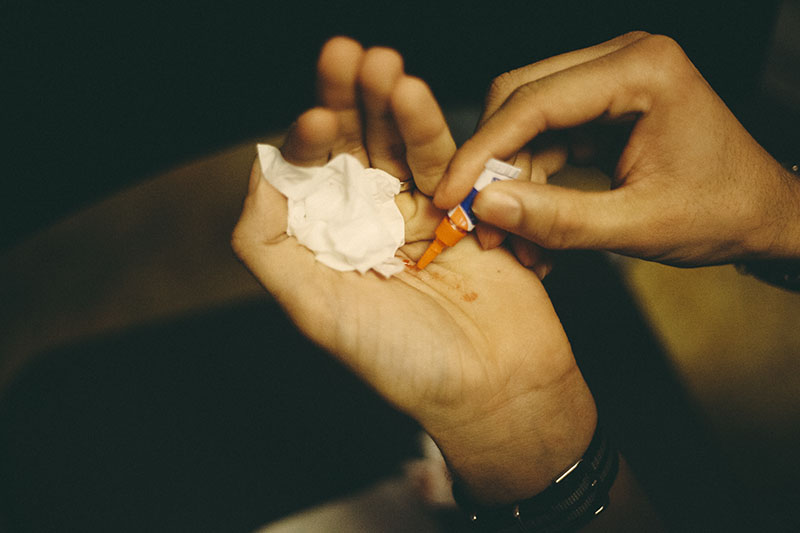 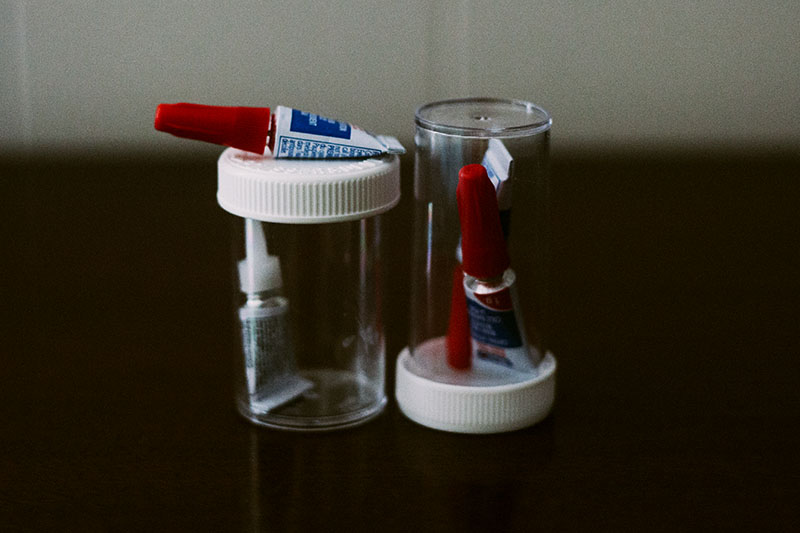 As always do your own due diligence and know your own limits with regards to comfort threshold. I never recommend for people to take action (especially the medical kind) when they are not comfortable. There is nothing wrong with deciding that you can’t handle something and going to the pros. There is something wrong with powering through your discomfort and ending up in a bad situation you wish you’d never gotten yourself into.

Just because I sometimes using regular superglue on relatively deep cuts doesn’t mean its a good idea. As a matter of fact it’s probably a very bad idea. So please take what I write with the due context – just because some things work doesn’t mean they’re ideal – do your best to stick to what’s medically vetted and refrain from putting yourself at risk unnecessarily.

If possible, get someone to help you. It’s much less messy if you have a second person there to apply the super glue for you (especially if the super glue is on your dominant hand/arm), and they often can apply the glue much more accurately than if you were doing it yourself.

Super glue is a fantastic medical resource for cuts, but while it is a little bit of magic goodness, it’s certainly not a magic bullet. Take your time. Evaluate the condition of your wound and realize it’s not ideal in all cases. Opt for stitches if bleeding does not subside or the wound channel is just too jagged to be safe to seal shut with medical grade super glue.

Do you know how to tell if a cut is infected, whether to use Advil, Tylenol, or Aspirin, and how to quickly assess and address emergency situations? Did you know you that Imodium is an excellent tool for survival?

Want even more? Quickly browse through the first aid articles we’ve published on this blog, to see if there’s anything valuable you’ve yet to learn on the topics we’ve written about.