Hot on the heels of my Cold Steel Voyager Tanto XL review I now bring you the review for the Vaquero version of the same knife. Superficially, these two knives may seem quite similar due to the identical handles, however, as you will soon find out, the Cold Steel Voyager Vaquero XL has some unique quirks of its own. 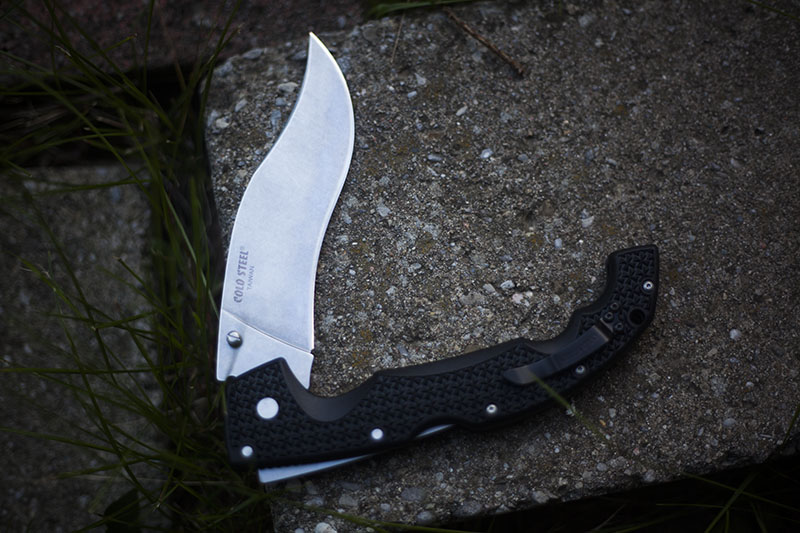 Much like the Tanto Voyager, this is a huge knife. The core difference is the sheer amount of blade you get. The tanto doesn’t have that much belly, unlike the Vaquero. It’s definitely more than a handful and will take over your entire pocket should you choose to EDC it. 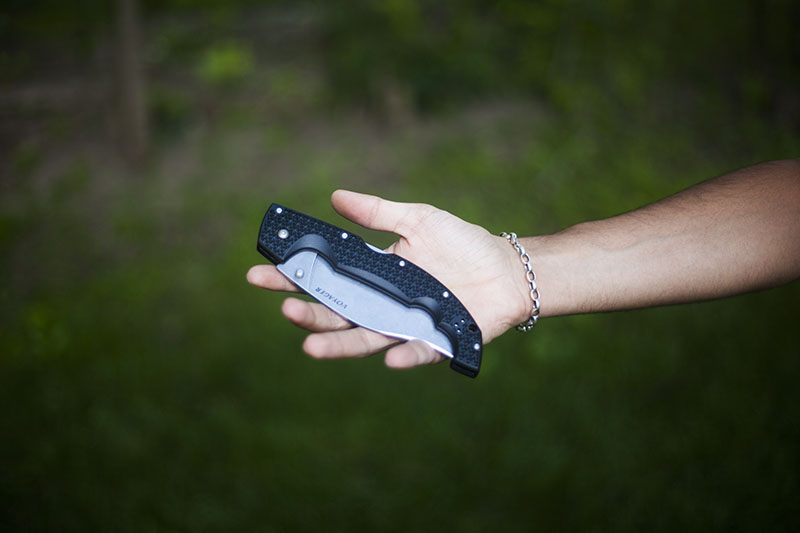 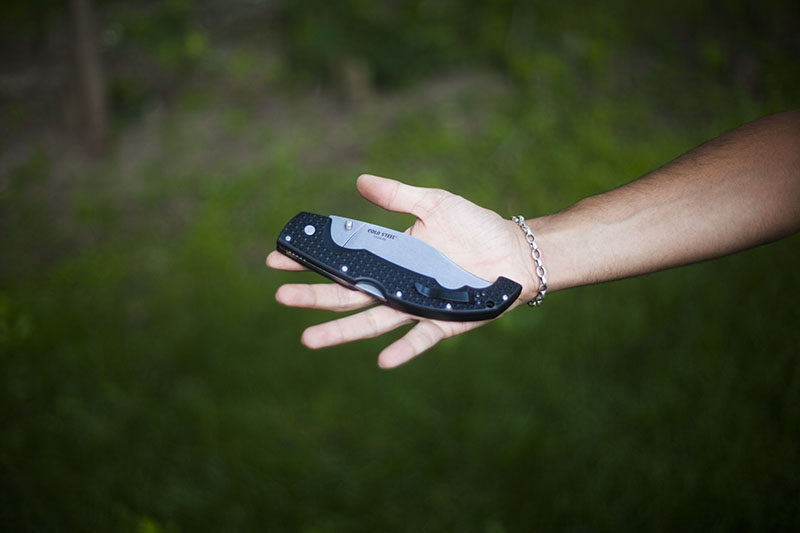 Opened, you get a glimpse of that insane blade. The Voyager Tanto has a more heavy duty/beater aesthetic to it, but this blade is all bad intent. This is not designed to cut cardboard or slice tomatoes (although it does both quite nicely), this is 100% a two legged predator filleting knife. It’s one of the few knives that has ever made me flinch when whipping it out. The first day I wielded it, it left a nasty impression on my finger, and as you can imagine, was entirely unapologetic about that.

I think Cold Steel should have called it the Widow Maker. I get the Spanish Vaquero vibe with those sexy swoops and lean cutting performance, but frankly this is an evil, evil blade. I have mean looking knives, like my Boker CLB Karambit, but this one takes the cake in terms of sheer intimidation factor. 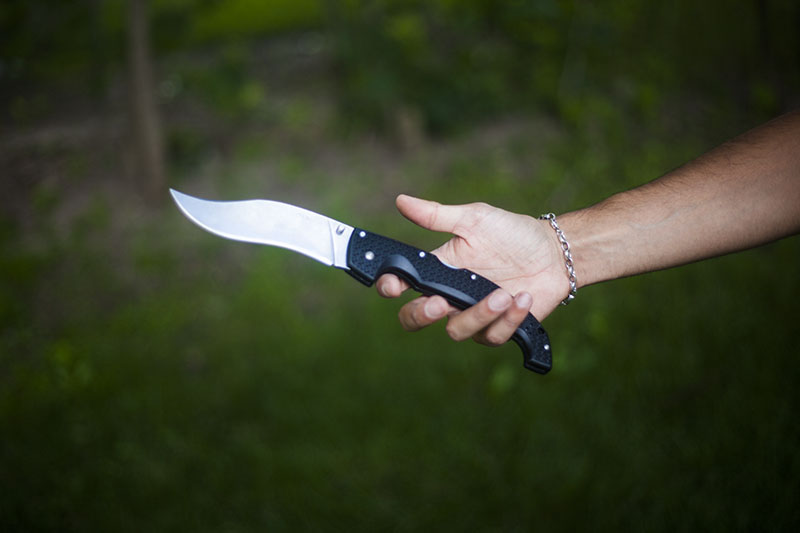 The Cold Steel Vaquero XL is 12.25 inches (31 cm) long overall with 6.75 inches (17 cm) of that being the handle. So as you can imagine, wielding it in public is… interesting. I did it once with my in laws and they just stared at me like I had two heads. My advice (unless you enjoy horrifying people) is to use this around the more outdoorsy types and not at a family picnic. You might cause a stampede (away from you, not toward you); just sayin’. 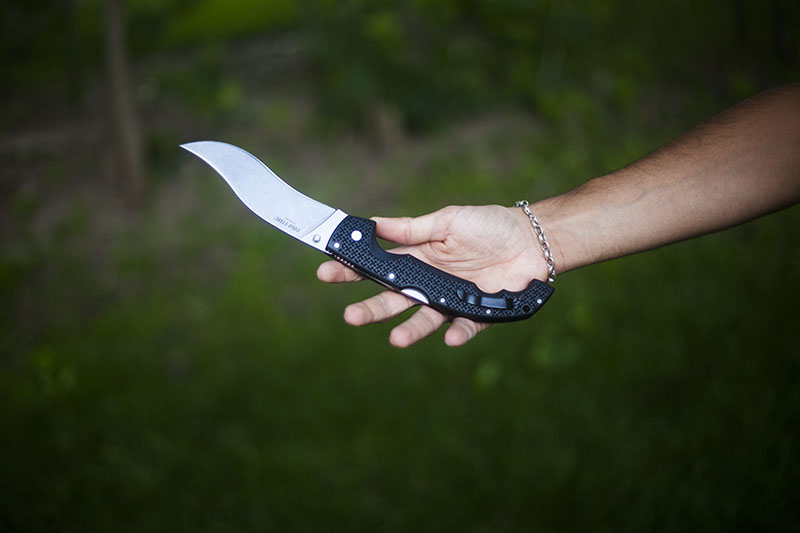 Below you can see the core difference between the Cold Steel Voyager Tanto XL and this Vaquero. Some might question why I would review this one seeing as it’s so similar, but as you can see, the blade on the Vaquero is tapered to a toothpick. Unlike the Tanto Voyager XL, you wont want to pry with this one – at all, even though the stock is 4 mm at its thickest point. 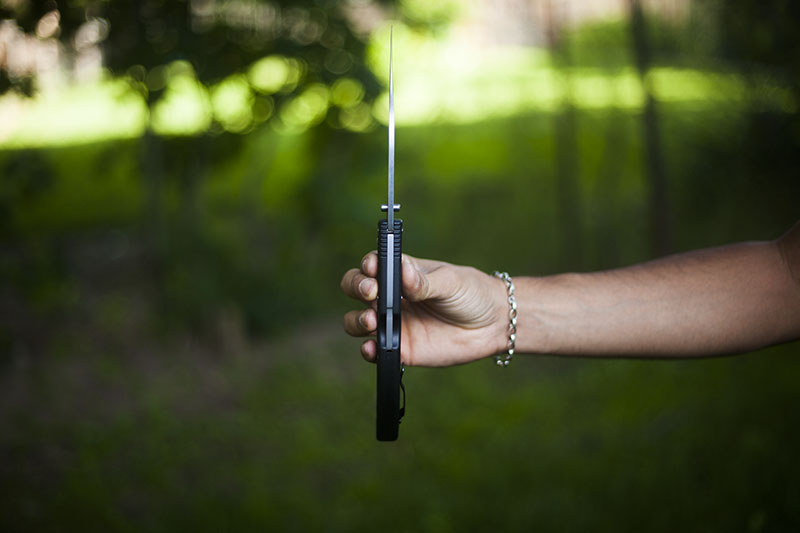 A lot of this review will echo my previous thoughts on the Tanto Voyager, of course. The Cold Steel Voyager Vaquero XL is a lightweight beefy knife thanks to the most excellent TRIAD lock. I am sure by now you are sick and tired of me raving about this lock, but really, it’s pretty darn amazing. Demko did an amazing job designing it and Cold Steel knocked it out of the park when it came to executing it across their entire folding knife range (for the most part) at an extremely affordable price point.

I am always impressed by how much Cold Steel brings to the table for such a modest sum! 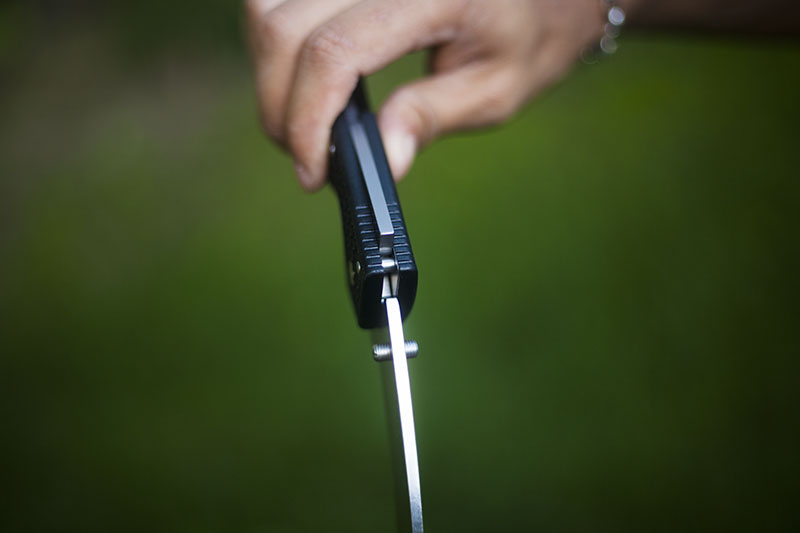 The full flat ground blade is super super lean with a scary sharp edge out of the box (my fingers can attest to this). The Vaquero XL is a horribly vicious slicer and I caution against waving this bad boy around, as anyone near you might lose a limb or two.

The newer Vaqueros come with Carpenters CTS-BD1 steel, which is an upgrade over the AUS-8A one that I have, although not a particularly noticeable upgrade in terms of real-world use (I have both and couldn’t tell the difference personally). 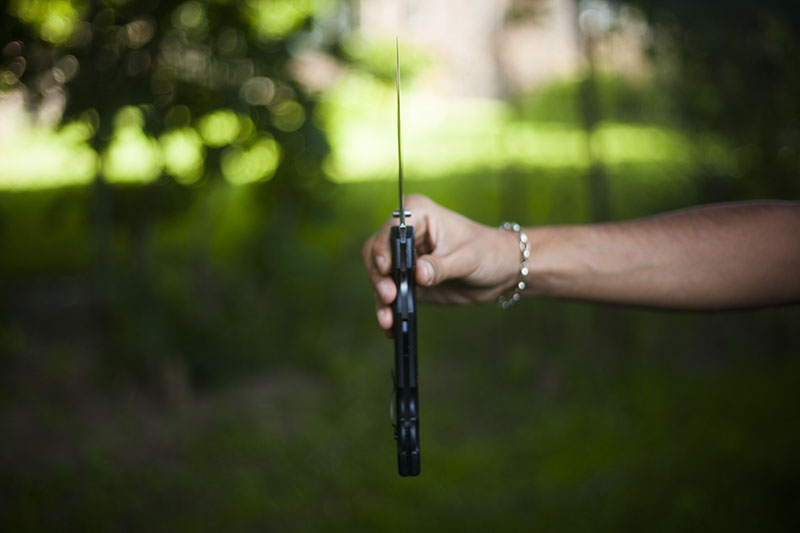 As I said, extremely tapered edge. This steel shard will stab through anything like butter. I am surprised the nanny state hasn’t forced Cold Steel to add a warning label before shipping it out! 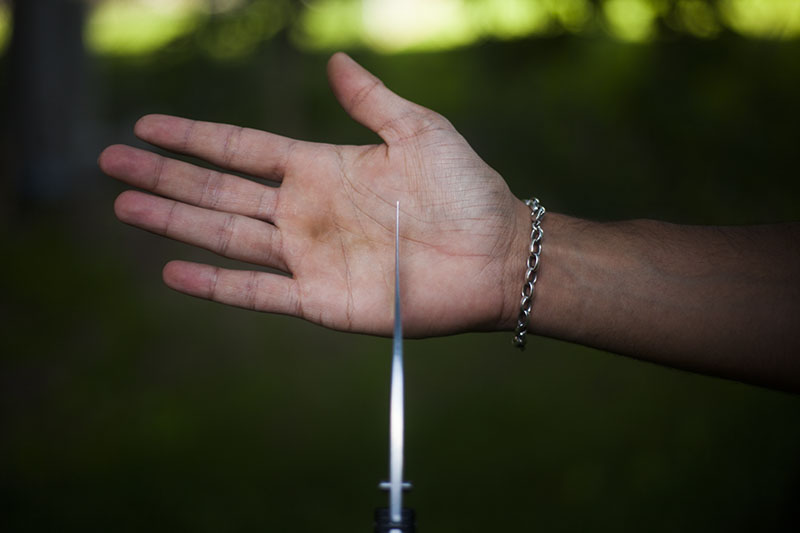 Fit and finish on the Cold Steel Voyager Vaquero XL is quite excellent. We are talking about a relatively inexpensive knife with world class grinds and a crazy amount of blade – frankly, Cold Steel never fails to amaze me. 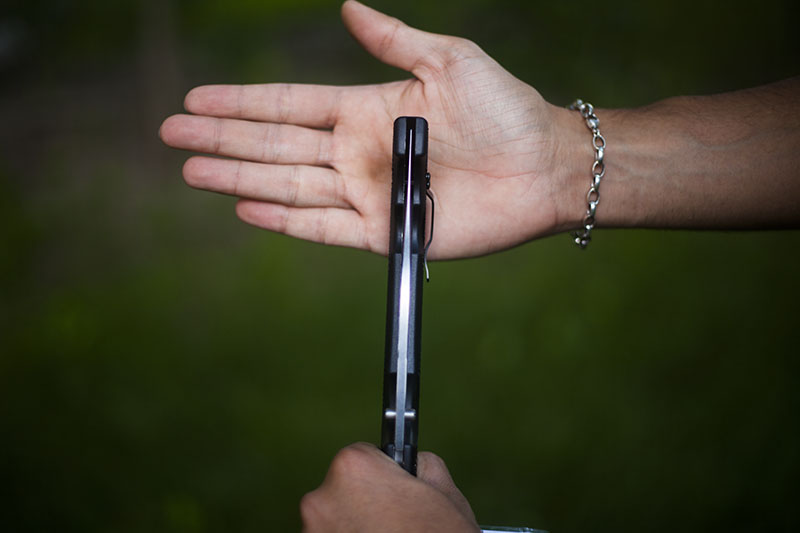 Nested liners; very happy with that. The weight rings in at 7.2 ounces, which is very impressive for a knife with 5.5 inches of blade. A lot of that is thanks to the lightweight “Grivory” (basically a glass reinforced nylon) scales which offer decent rigidity with the steel liners and excellent grip with that protruding cross pattern. 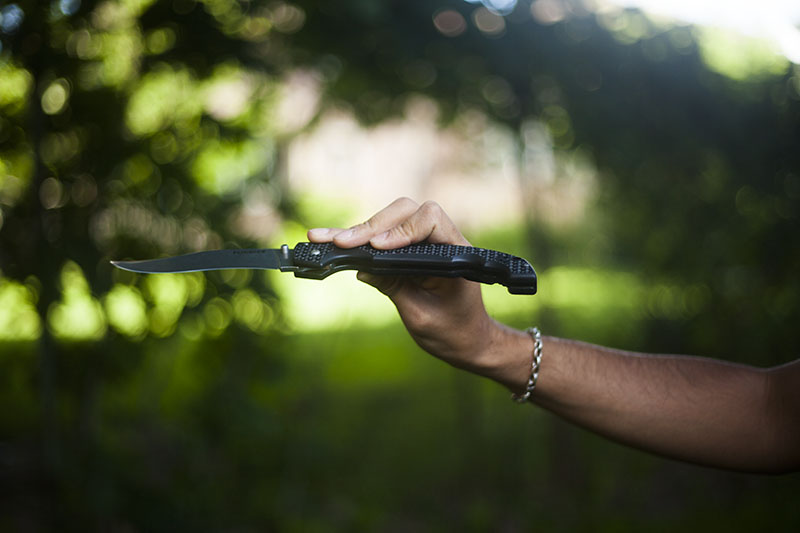 Deployment of the Voyager XL Vaquero is very smooth. It’s always interesting to unleash a 5.5 inch blade, but after 20 minutes of flipping it about and scaring everyone around me, it felt like any of my EDC folders. Sure, I had to adjust my grip a smidgen, but it’s remarkably “normal” if that makes any sense. 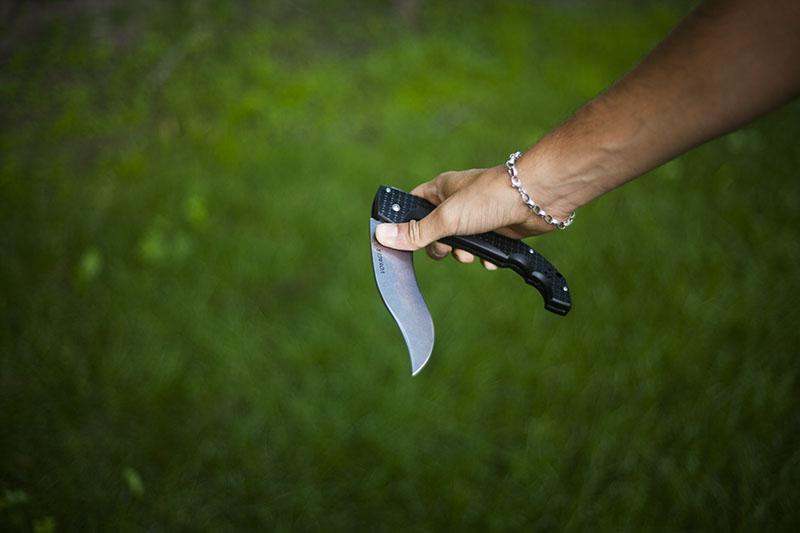 The Vaquero is tip up only. Reversible because Cold Steel provides an extra clip in the box. It’s sorta discreet (I guess..) for a nearly 7 inch folder in your pocket. Then again, if you buy this, subtlety is not exactly the calling card you’re intending to use. 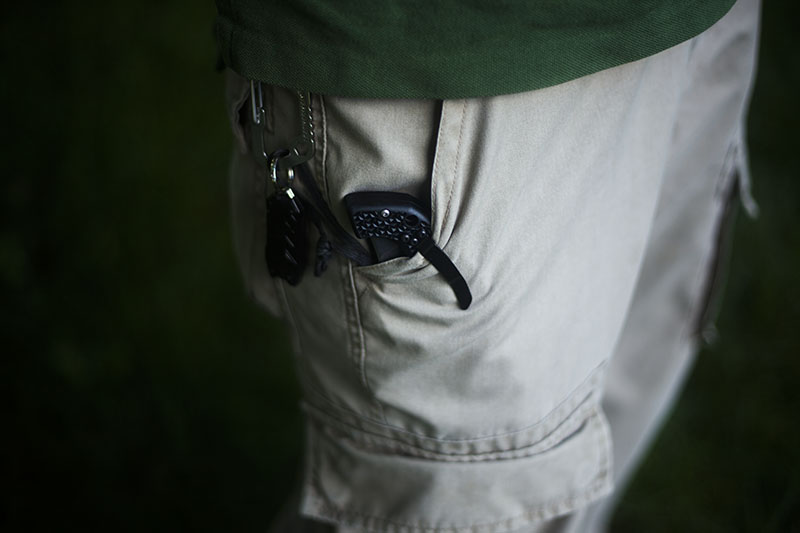 No choil, but a decent un-sharpened section will protect your digits (possibly) should the lock fail. That being said, it’s a Cold Steel TRI-AD locking knife, so go wild and live a little. I have absolutely no fears when it comes to treating this knife roughly. The only area of concern for me is the somewhat fragile tip, as it’s basically a stainless steel splinter. Not quite as acute as the Kershaw Leek, but definitely up there in the needlepoint rankings.

Interestingly, the blade is ground in a way that reminds me very strongly of the Spyderco Temperance 2. It’s flawless in its execution (at least with the example I have) and I am really impressed with the grinds on the Vaquero XL. 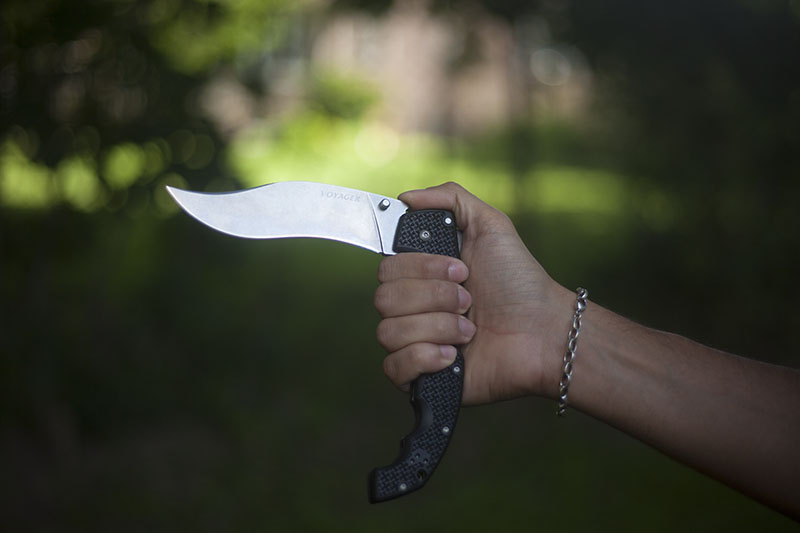 The blade of the Cold Steel Voyager Vaquero XL has that crazy recurve to it. In practice, I don’t notice it much – it just offers excellent pull cut performance and a lot of belly. The only thing I would add is that sharpening might be a problem if you don’t have a rod style sharpener like the Spyderco Sharpmaker. I don’t see how you would sharpen this on a waterstone.

The grip and comfort is identical to the Cold Steel Tanto Voyager XL. You can expect to find the same excellent ergonomics and choices/cut outs throughout which lock your hand in. With or without texturing and jimping, this knife isn’t going anywhere. 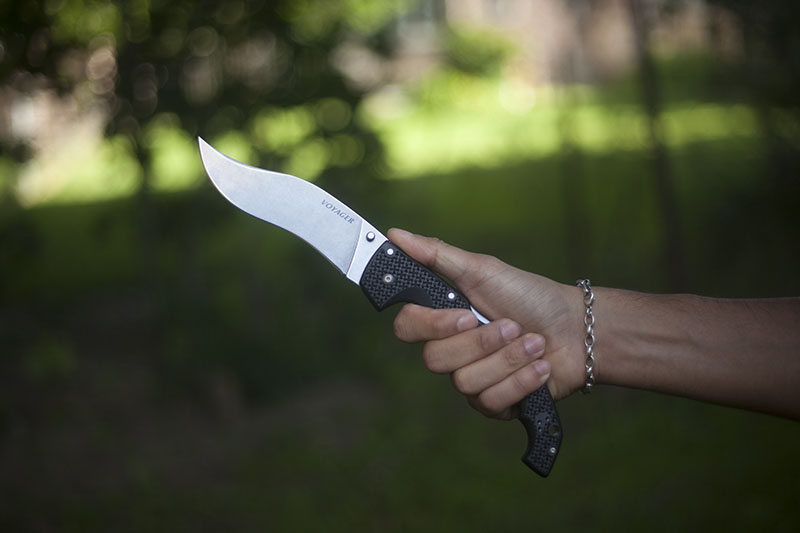 Choking up on the Cold Steel Voyager Vaquero XL is pretty comfortable. Detail work with a knife this size is always going to be a challenge, but if you’re making wood shavings or a point on a stick, then it’s definitely comfortable (enough). The recurve full flat ground blade adds a lot of slicing real estate, far more than the Tanto Voyager XL has. 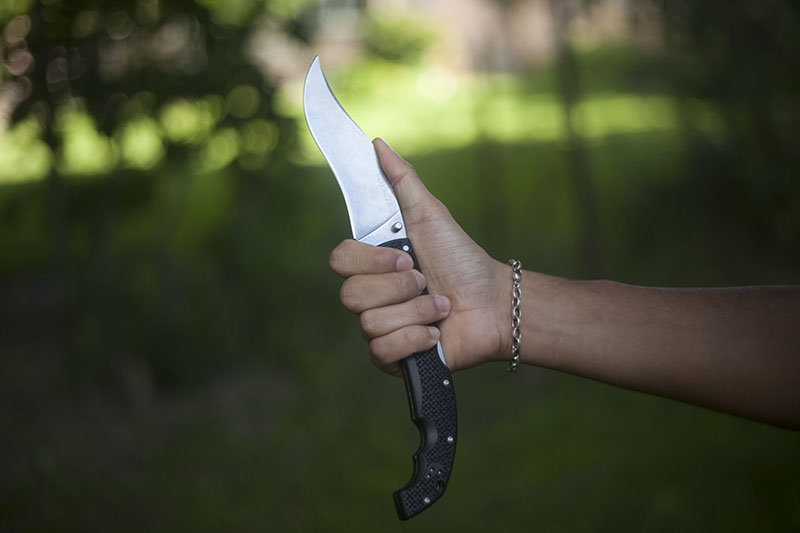 Choking back on the Cold Steel Vaquero XL is where this angel of death gives you all kinds of bad ideas. It’s a ridiculously potent weapon. I don’t EDC this knife, but if I had to sweep the house after hearing a broken window, this is the knife I would grab. Frankly, with a blade this mean, technique is almost superfluous to requirement. Point towards enemy. Yep. 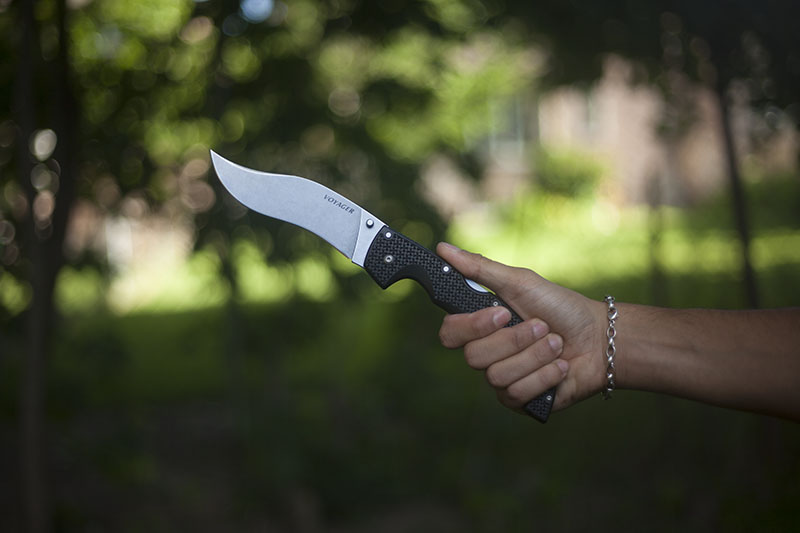 In terms of having a blade that combines slashing, penetration, and power almost organically, this is the knife. I can think of no alternative. The Spyderco Civilian is a better slasher and a Boker Applegate will stab better, but nothing I own will do both (together) as well as this. 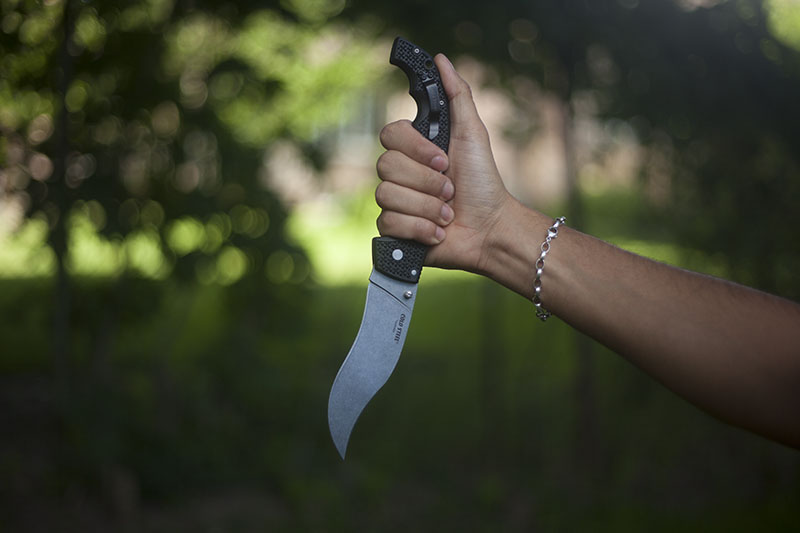 Pinch grip is not comfortable but in a pinch (heh), it’s viable. Would you really take this knife to harvest wild flowers though? 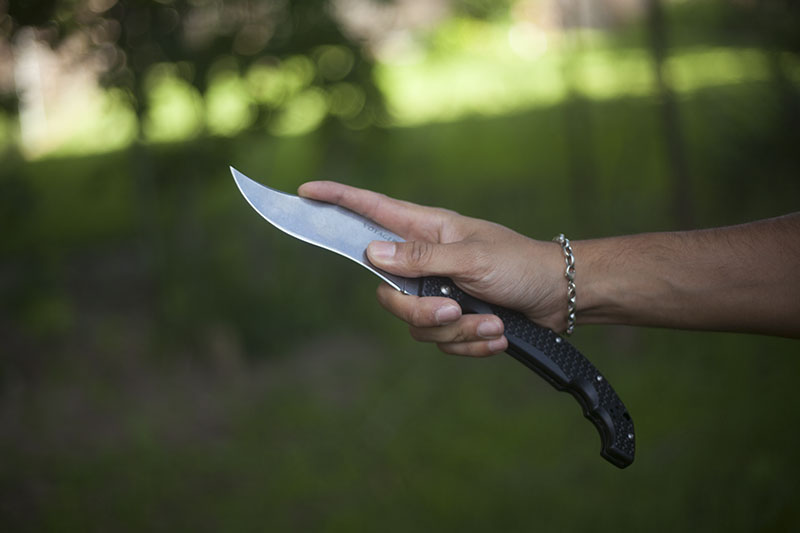 And finally, balance point: perfect. And I do mean actual perfection.

The Cold Steel Voyager Vaquero XL is light in the hand and balanced like the mean martial blade craft blade it asserts itself to be. Hold the Vaquero for more than 10 seconds and you will find your eyes darting around your environment looking for something to slice. It’s what it was meant to be. 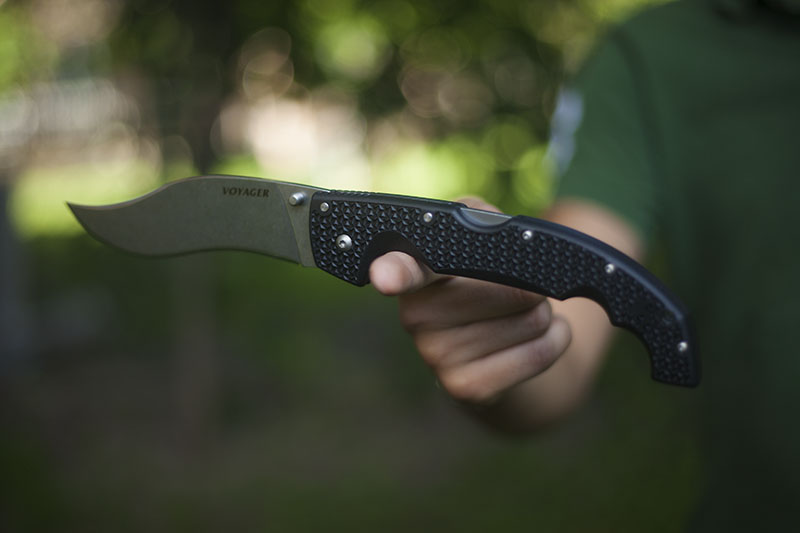 It’s hard to review these enormous knives (but a lot of fun) as the performance as an EDC is, of course, limited by size, at least in my neck of the woods. When I reviewed the Tanto Voyager XL, someone did mention that they could EDC a knife this size, and to that I say, kudos and please adopt me.

Where I am, I can’t walk around with this in my pocket. Canada technically has no law that explicitly forbids this, but the police have a lot of discretion and I don’t think they will take kindly to someone saying they use the Vaquero XL to peel apples.

It’s sad that we live in a world where I have to rationalize with the policing powers that be what my tool is intended for, but that’s the way it is. This is why we should all support each other in this community. I fear in the future people will expect such badass tools to be nothing more than wall hangers – and that’s a damn shame. 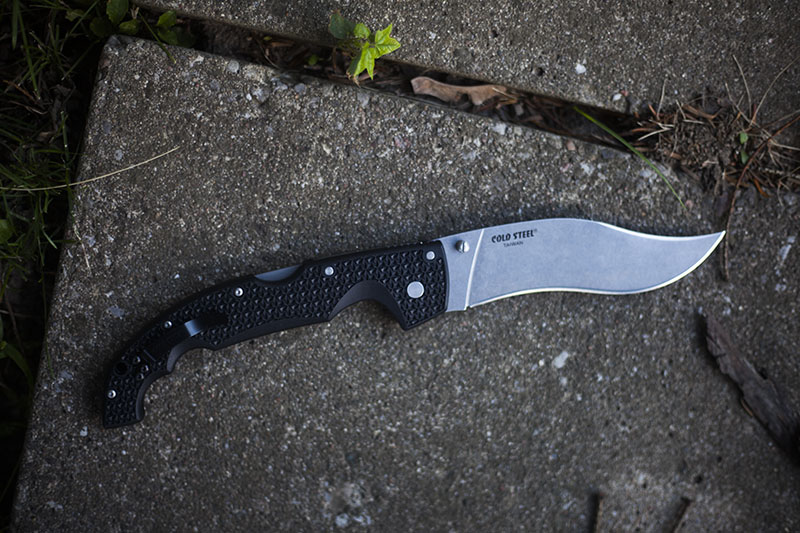 With that said, the Cold Steel Voyager Vaquero XL is a well ground blade with a bucket loads of cutting performance. We are talking class leading slashing results here, swing downwards and it cuts. Tatami mat? No problem.  It’s light and at the end of the day a formidable self defense option.

Whether this is something you desire, well that’s up to you.  In terms of this knife or the Tanto Voyager XL, both are visually impressive. In terms of intimidation factor and cutting performance, I would have to give the edge to the Vaquero, but the Tanto is undoubtedly tougher thanks to that tanto tip. I own both and I am pretty content with that situation. For me, why chose? 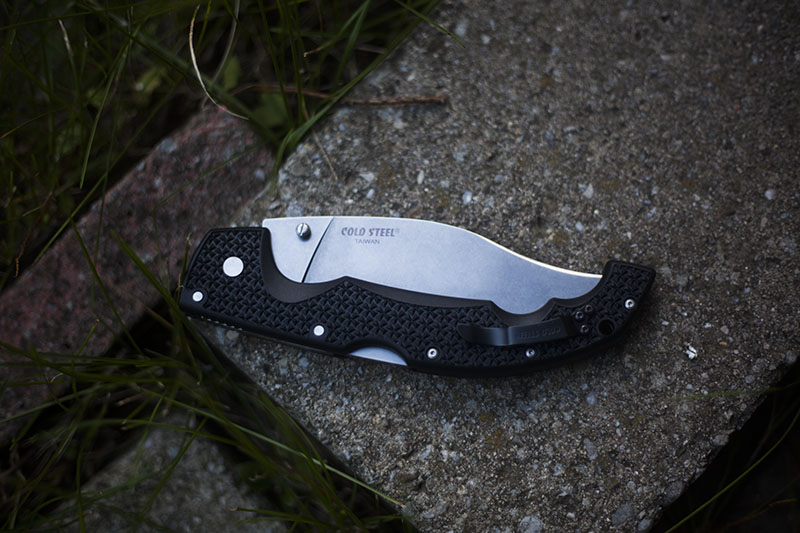 The Cold Steel Voyager Vaquero XL is a dilemma wrapped in a quagmire.

I love it, but I can’t carry it. Its sheer size and aesthetics greatly limit where I can take this knife and thus, for me it will sadly be something I carry around the house or homestead exclusively.

If you live in a civilized community where you can use such a beast without fearing legal repercussions – do it. Because one day, you might not be able to.