Back in 2015, I reviewed the original Kershaw Shuffle. I don’t normally review newer models because usually the differences are so slight (Paramilitary 2 vs Paramilitary 3 for example), but in the case of the Shuffle II, it might as well be a different knife.

It would be easy to over simplify the Shuffle II by saying that it’s just a bigger Shuffle, but practically speaking, it’s one hell of an upgrade in terms of ergonomics, utility and in my opinion, style. So here we are, 2 years later, with the Shuffle’s bigger (and better) brother. 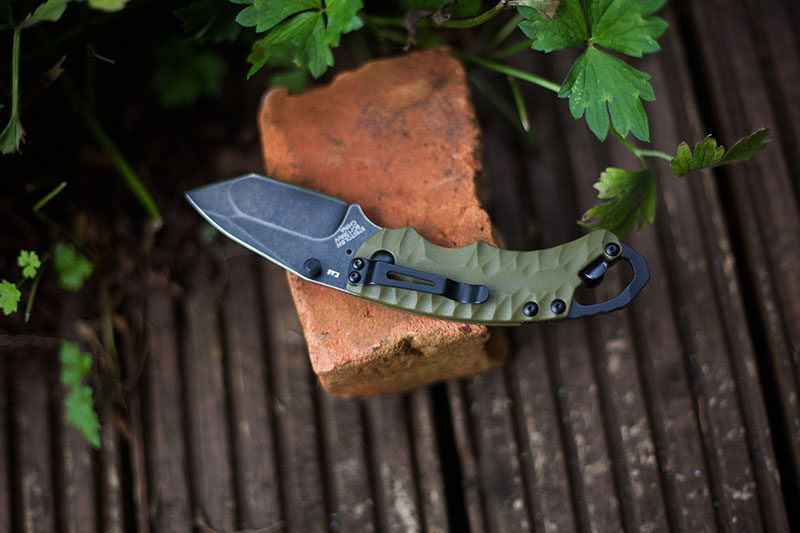 On the subject of style, I have to be honest here and point out that I do have a huge bias for anything that is new. I own too many boring 3 inch knives with standard G-10 scales and blades, so when something comes out that is so unexpected like the Kershaw Pub (great knife by the way) or the Shuffle, I immediately take notice because at least it’s different. The scales are similar to the original Shuffle in the sense that they are injection molded FRN, but in terms of feel and texture, this is a grown up knife unlike the original Shuffle that seemed to be styled as something you hand out for free at trade shows.

The blade excels as a box cutter (more on this later) and since I have owned it, it’s basically lived on my desk. This is the sort of knife you automatically gravitate towards because it just grabs you visually. 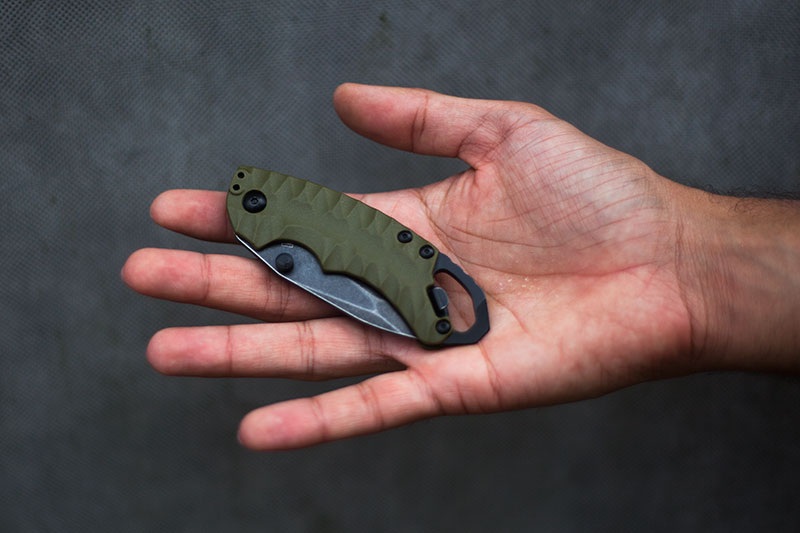 The biggest appeal of the Shuffle II is that it’s a proper EDC knife. The original Shuffle was a lil’ tyke; bulkier than a Spyderco Dragonfly, but not quite a full sized knife in terms of grip. The Shuffle is the Kershaw equivalent to the little big knife series from their Boulder, Co. Rivals. It accomplishes this feat in the way every other company seems to do it – large choil so that your grip can extend by choking up on the blade. Practically speaking, it’s a system that works because the deployed size is disproportionate to its size when closed.

I know some of you don’t like this, but personally I think its a win all around. If the lock fails (unlikely) then your digits will be safe and in general use, the comfort is greatly elevated by offering a full 4 finger grip in a relatively small package. 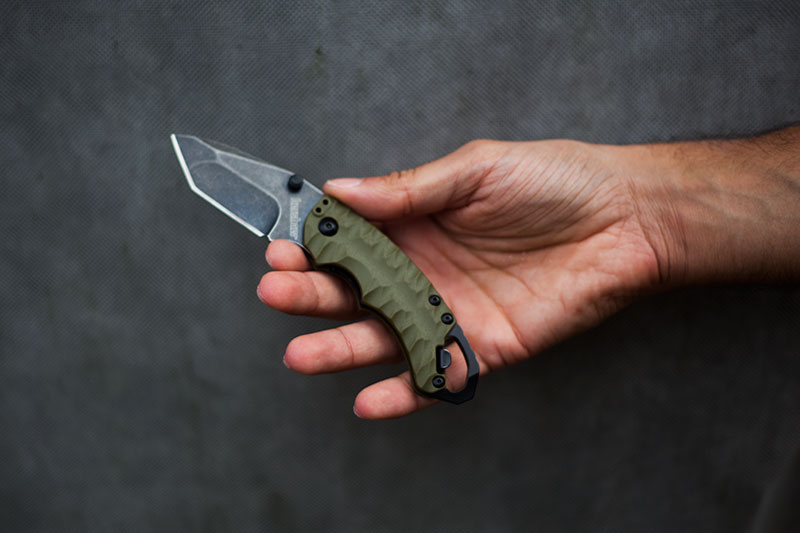 As for the blade, it’s simply bad ass. The Kershaw Blackwash finish is awesome. That American tanto shape is stout and useful in urban situations (not exactly a foraging/bushcraft knife, but realistically this isn’t an issue in this day and age). I admit I prefer neutral drop point blades for the sake of flexibility, but after falling in love with my Cold Steel Recon 1, Kershaw Blur, and CRKT Hissatsu, it’s pretty obvious that I have become appreciative of the tanto.

I wouldn’t say I am a convert, but at least I don’t dismiss a knife off the bat just because it doesn’t have a traditional blade shape. Objectively, the blade has shrugged off any task I have asked of it, so what more can I ask for? 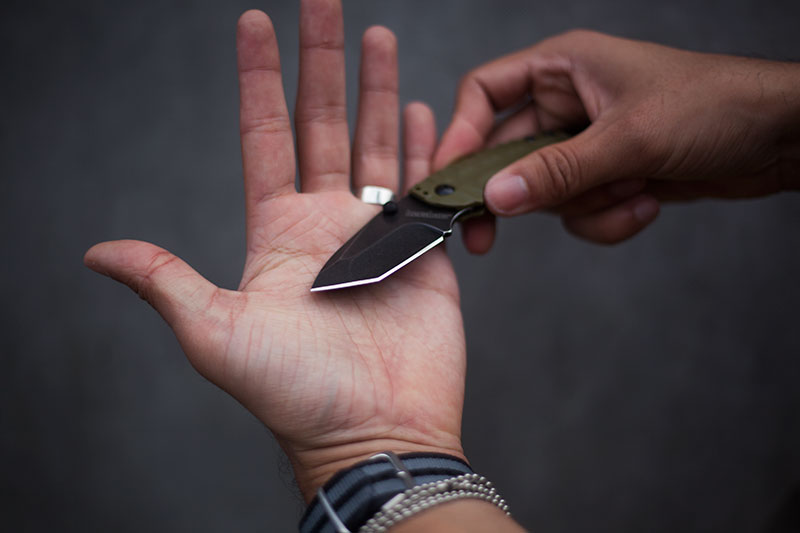 The lock on the Shuffle 2 is what you would expect: nicely made nested liner with solid engagement. Obviously, like everything in life, the performance will be dictated by price most of the time, and considering this is a budget option, I have zero issues with this. I probably would prefer a TRI-AD lock but then again, I have never had a liner lock from a reputable company fail on me, so there you go.

It’s also worth noting that this is a 2.25 inch blade milled out of 8Cr13MoV. It’s a sturdy blade, but it’s not designed for extreme use the same way a 3.5 inch Cold Steel Recon 1 would be, so comparing them would be like comparing apples and oranges. 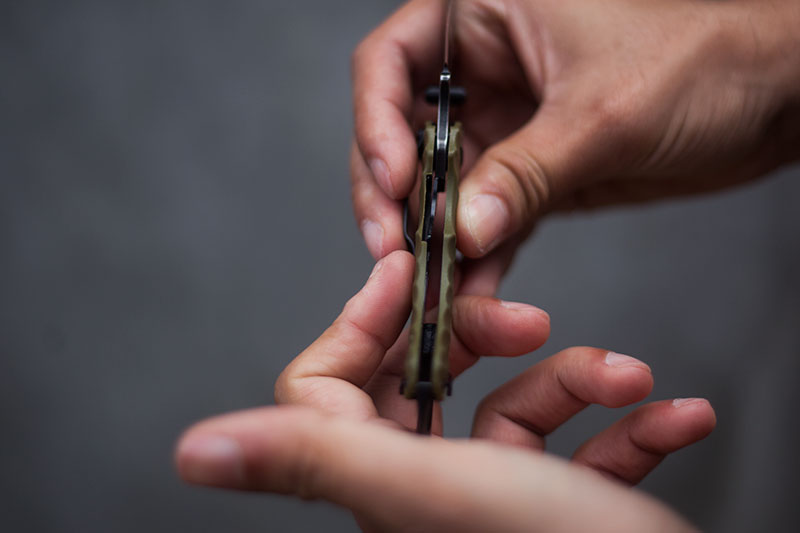 I have glove size L hands and the Shuffle II feels pretty perfect to me. As I said before – I dig choils. The safety benefits alone make it inherently pleasant to wield. As you can see below, the choil is properly implemented. 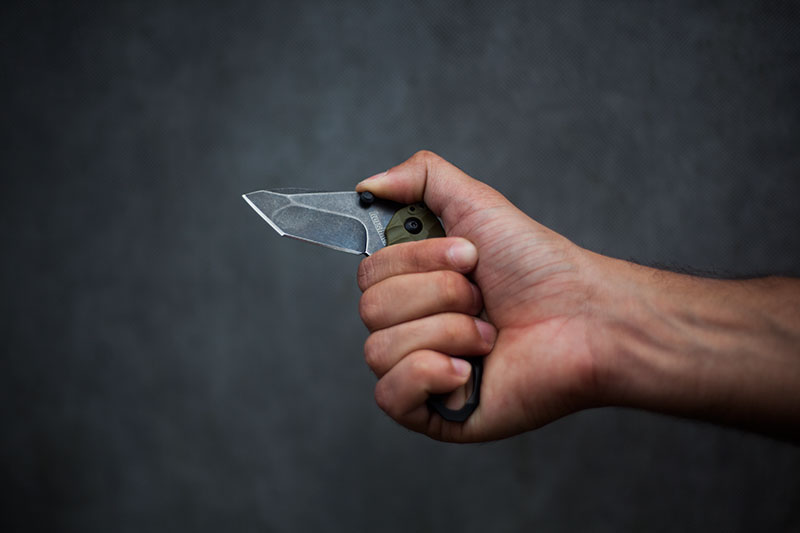 Onto my only real criticism of this knife. I get that Kershaw wanted to add “features” to it, but sometimes I do wonder if these features are added simply so that they can say, “Contains a screwdriver, pry bar, and bottle opener!” The reality is that whilst the flat head screw driver works, the pry-bar works and the bottle opener works (better than on the original Shuffle) – it’s still inferior to having separate tools.

You might say, “Surely Thomas you are saving weight and/or space, right?” Wrong.

This weighs in at 3 ounces for a a 2.25 inch blade. I could have a teensy screwdriver (this lil’ stanley one comes to mind) that offers far better utility as well as a ti pry-bar/bottle opener and it would weigh either less or about the same. The reality is that to keep costs low, all these tools are built on a solid steel backspacer. I would love to have an option that is sleeker and lighter without all these extra tools. 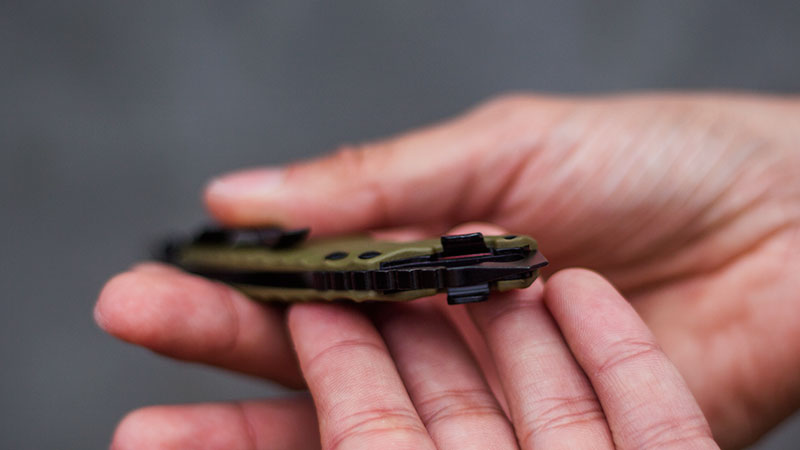 That said, the ergonomics and blade redeem any quibbles I have about the weight and value of its extra tools. For a knife with such a small footprint, the amount of torque you can crank out when using it is ridiculous. This is a legit to goodness full sized grip that really fills your hand. More so than a Spyderco Delica as a consequence of having such wide scales. 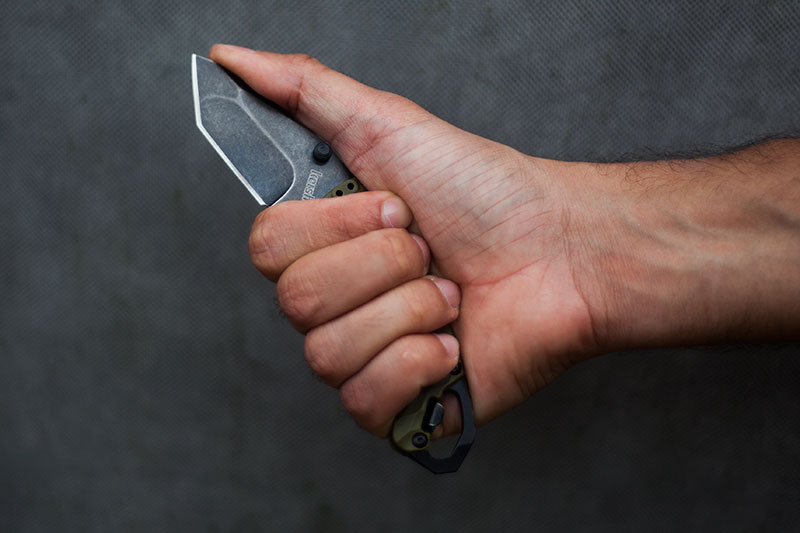 I know someone will ask (there is always one), but no folks, it is sub optimal to ignore the choil. Looking at the photo below, this is pretty clear to see. It technically works, and yes, it will extend reach, but comfort levels go from super nice to simply meh. 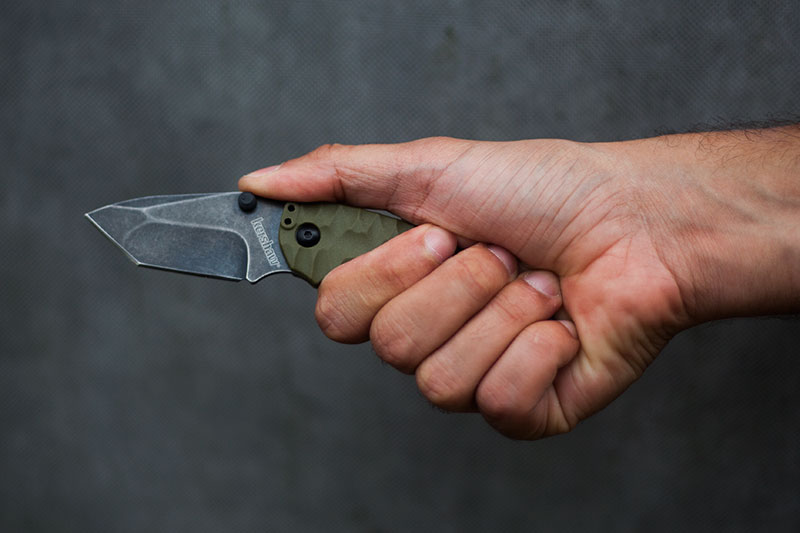 Reverse grip looks awesome. Feels slightly less awesome, but still very viable. Tactically, it looks the part, and I am sure it would do some damage, but at the end of the day it’s a 2.25 inch blade folks. It just doesn’t feel or look it. 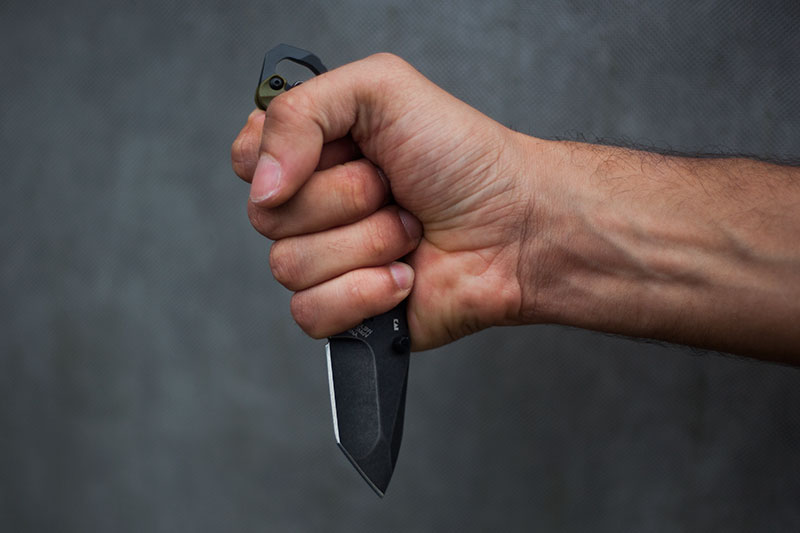 As for carrying options, left/right tip down only. I blame the multi-tool aspect for not giving us the option of the vastly superior tip up, but what can you do. It’s solid, deployment is fast with the ubiquitous thumb stud (both sides, so it’s wrong-handed friendly). Beyond that, there is nothing I can add. 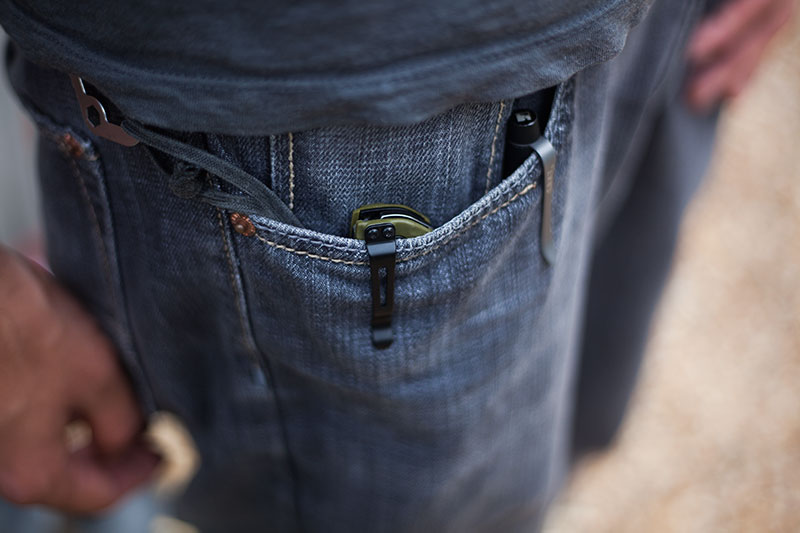 Whoever designed this knife needs a solid pat on the back. The aesthetics are quirky and badass at the same time whilst offering well thought out performance. If it didn’t work so damn well, it would be gimmicky, and I love that. If you are torn between the Shuffle and Shuffle II, it’s a no-brainer. Go for the Shuffle II. 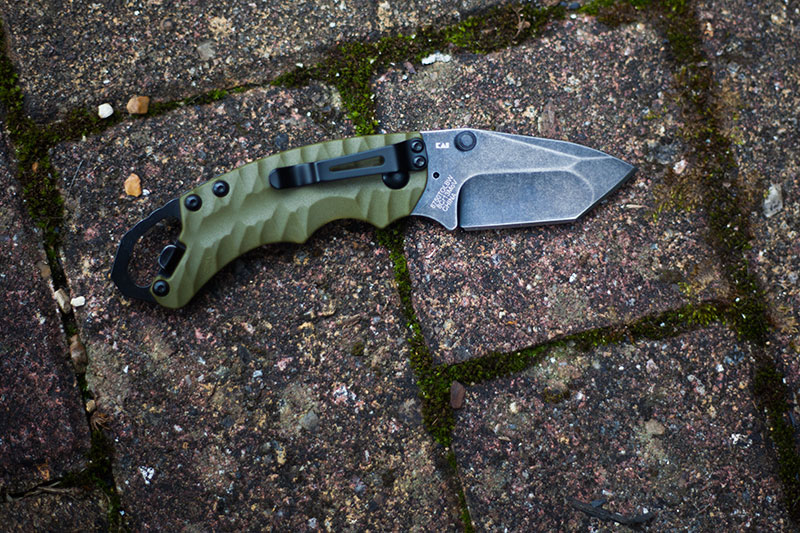 Kershaw makes great budget knives. This is well known and the Shuffle II does not go against this industry fact.

For sub $20 you get a ridiculous amount of oomph for your dollar, so whilst I dislike the lack of tip up carry, and would prefer for it not to have all the extra (weight-increasing) features, the reality is that it is simply impossible to look at this knife objectively and say that it’s not a great option.

Add to that the unique styling and superb ergonomics, what can I add to this review besides saying, buy it?