The Cold Steel Kudu is a modern interpretation of the Okapi knife designed manufactured in Germany for the colonial market. The original was produced in 1902, and the target demographic needed an inexpensive everyday pocket knife for all the tasks one might encounter in the African brush. Did Cold Steel do the classic justice? It’s hard to gauge.

Modern interpretation of classics are always a tough act to follow (as any lover of music will tell you), but when all is said and done, I think Cold Steel deviated so much from the original, even beyond simply the aesthetics, that I don’t feel they should be compared side by side. The Cold Steel Kudu holds its own, regardless of the inspiration for its origin. 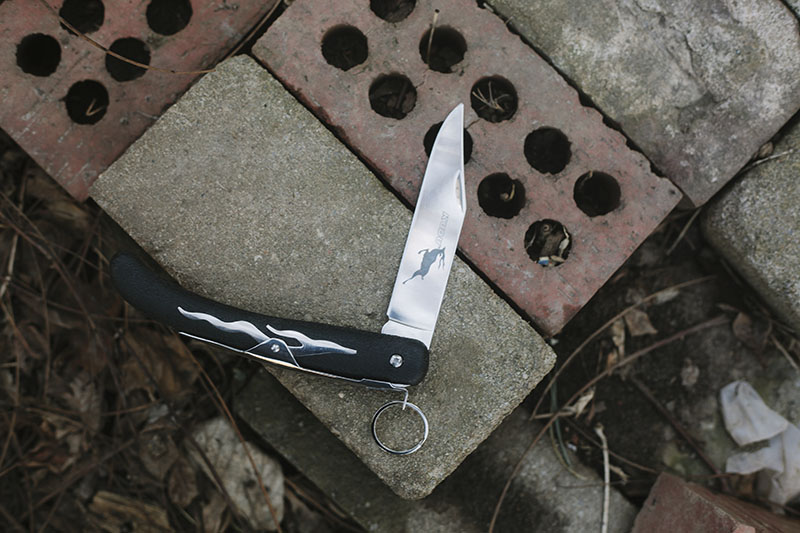 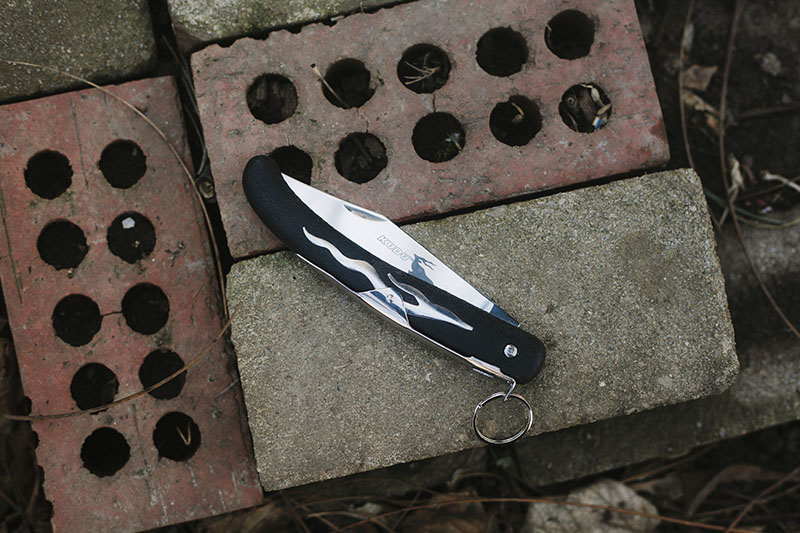 Closed, you might be inclined to think that this is a “regular” large EDC knife, but its size actually falls under the absurdly large category. Its clean lines and austere design really mask the fact that this is currently the largest folding EDC knife I own. Larger even than the gargantuan Cold Steel Recon 1, or even the Spyderco Military. 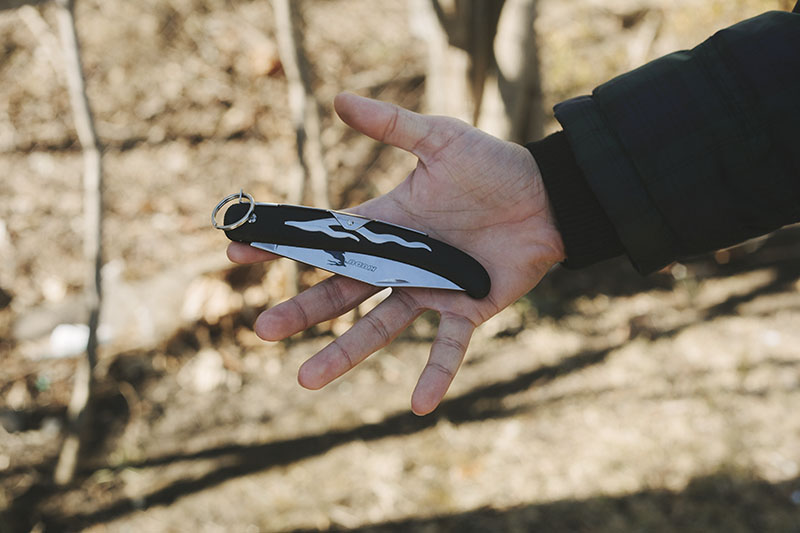 10 inches (25 cm) of overall length, 4.25 inches (11 cm) of that being blade makes for quite a large knife. It might seem like “just” 4 inches of blade, but in-hand, it feels much larger than its measurements would suggest. If you have Andre the Giant hands, and no knife handle is typically large enough to fit you, then check out the Cold Steel Kudu. I can almost guarantee it has enough handle to suit your needs. Hell, it offers an extra 2 inches+ of handle length when gripped, which is pretty insane. 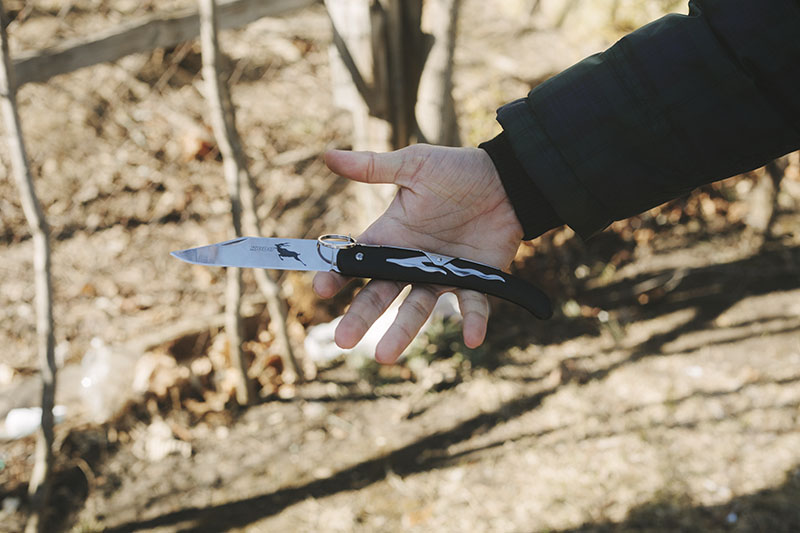 The interesting thing is that the Kudu really isn’t a hefty knife. Weighing in at 2.4 ounces (0.15 pounds), it’s actually quite pocket-able when only weight is considered. With its thin handles and 2 mm thick blade, I would almost place it in the “light EDC” category were it not for its overall length. 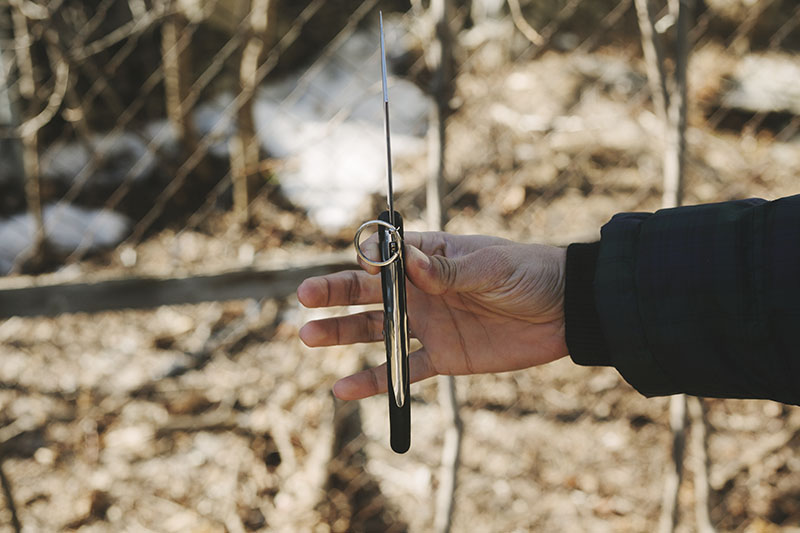 The Cold Steel Kudu comes with a ring lock system (a completely different ring lock system, of course, from those that Opinel knives sport). In practice, it’s very similar to a back-lock, but instead of pressing down on an indent to relieve the locking bar (in this case, steel sheet), you instead pull a ring as the following photographs clearly (I hope) illustrate.

The tang of the blade does have a bunch of half-stops that in theory mean the blade shouldn’t fall on your fingers whilst being folded. I would still use caution and slow deliberate movements, however. 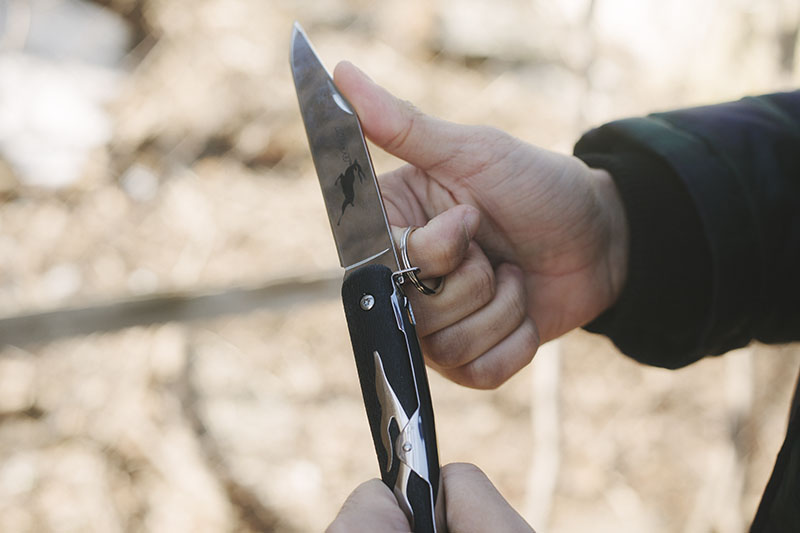 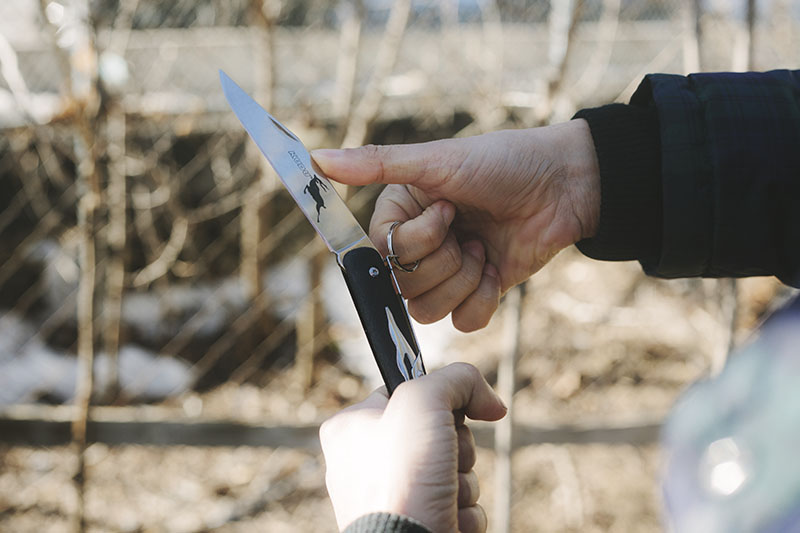 In real world use, I can’t say I am a huge fan of the Cold Steel Kudu’s ring lock. It’s not the most natural unlocking system, and it’s tricky for those less talented at the act of closing knives to use. But then again, in terms of sheer simplicity, and with the cost of the knife considered ($6!?) it feels a little ridiculous to complain.

It’s a good lock, but I will reiterate: be very careful when unlocking it, as it does require quite a bit of force initially. This can feel a little bit unsafe in terms of your hands being in the way of the blade. However, if you take your time and use slow, precise movements, I don’t foresee any issues. I definitely worry a bit when Elise tries closing it, but she’s a self-admitted klutz, and I cringe while watching her close the Pocket Bushman let alone this knife, so there’s precedent for me to worry there. For less “challenged” people, however, this lock will be fine.

I am a sample size of one, but I did chop, pry (lightly), and spine-whack this knife. I couldn’t get the lock to disengage accidentally, but with that said, it should be noted that there is slight vertical blade play similar to a locking Victorinox knife. This is not a question of sloppy fit and finish, but rather a by-product of the design. The lock is pretty solid, and I don’t imagine it would fail under duress, but if you like the “feel” of a rock solid lock like the TRIAD lock in the Recon 1, then the Kudu might not be for you. 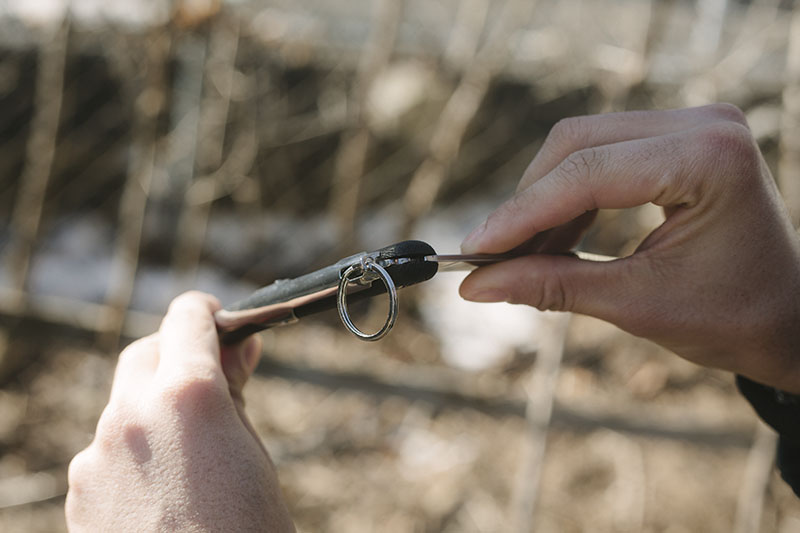 The 2 mm thick 4116 Krupp blade is nicely ground with a decently acute tip (considering the price of the Cold Steel Kudu). It’s obviously not a CNC ground blade, but rather, stamped out and then ground like many Swiss Army knives and other similar blades. That being said, I don’t think Cold Steel missed the mark. Obviously, the tip was ground using an automated process as opposed to having the final edge applied by hand, but for 6 bucks, I can’t expect any different and frankly neither should you.

I don’t recommend using the Cold Steel Kudu to cut out splinters, but it’s stabby enough for anything you could feasibly want to use it for as an EDC, and that’s okay with me. 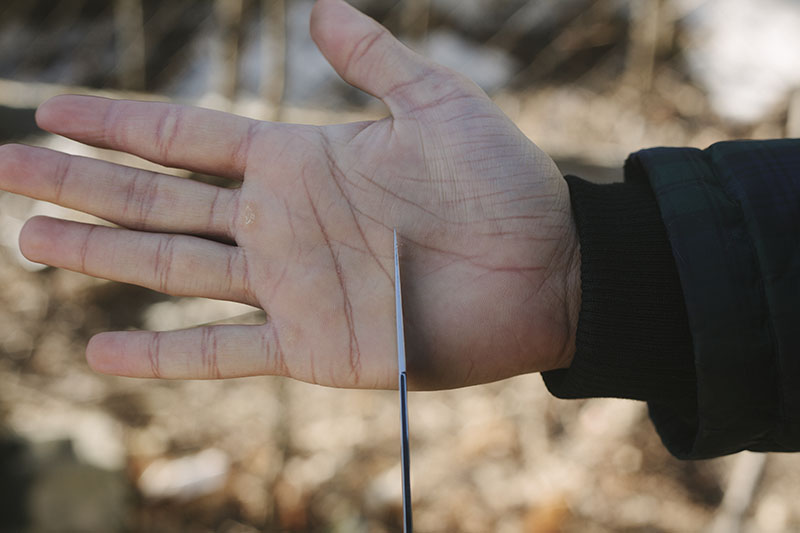 The ring on the lock can be used as an easy makeshift-lanyard when withdrawing the knife from your pocket. It doesn’t come with a pocket clip, so thats’ pretty much the only way your going to carry it around unless you want to attach it to a carabiner, as I have read some people do! That said, its super slim scales and lightweight construction mean it’s more than comfortable in the pocket, and it doesn’t “print” much at all. I don’t think anyone would guess you had a knife in your pocket, let alone one that’s 10 inches long!

As far as quickly deploying the Kudu goes, I would forget about it. It’s most definitely not a tactical knife as far as reacting to threats go, and its lack of carrying options and one-hand deployment system work badly against it should you want to carry it for that reason. 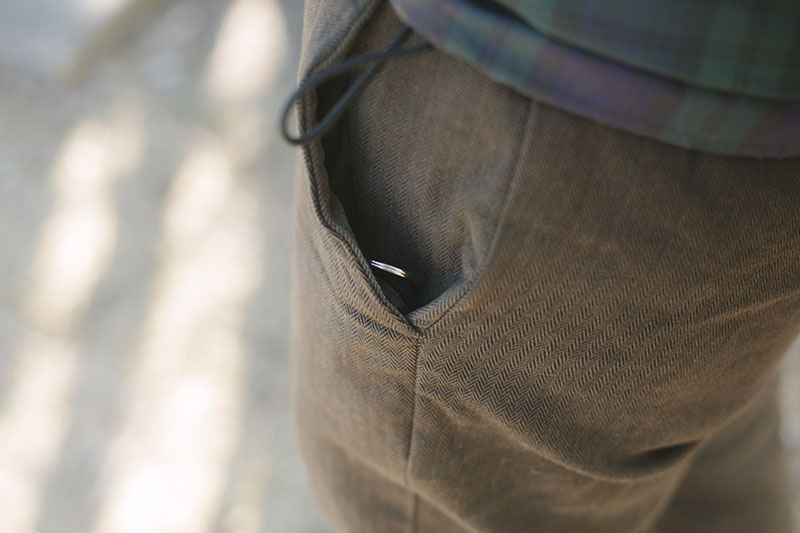 As far as I can tell (I haven’t taken the knife apart) the Kudu has nylon washers and an adjustable pivot. Interestingly enough for such a cheap knife, it came with dead perfect centering out of the box, and zero side-to-side blade play, so I was pretty impressed. I have handled much more expensive knives with far inferior fit and finish.

Seeing as this is a two-hand deployment knife, and the lock works against you when opening the knife up, you can really crank down on the pivot without incurring any real world consequences. 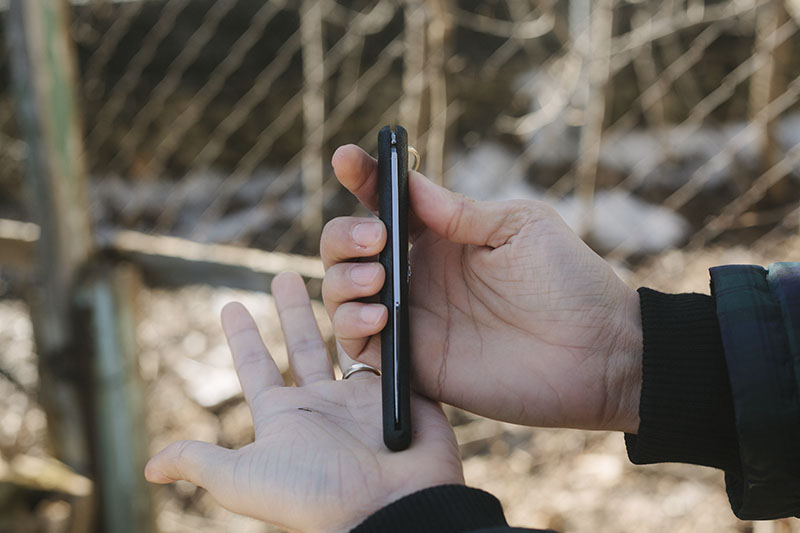 The blade is full flat ground. Not as nice as a Victorinox, but not as bad as a cheap kitchen knife. In terms of slicing performance, I would place it as average for a folding knife, but above average taking into account its price point and the sheer amount of blade you get.

It’s definitely good enough to use as a folding kitchen knife when travelling. The Krupp 4116 steel has similar edge retention to mid-range kitchen knives, which is more than acceptable. Super easy to sharpen and its corrosion resistance is superb. As a cheap knife to throw into your tackle box or leave on your boat? No problem. 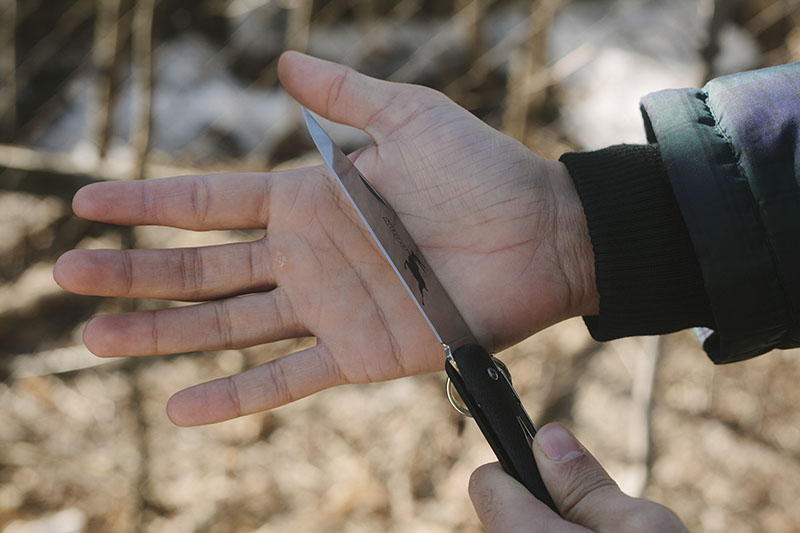 Using a standard saber grip, the Cold Steel Kudu does give you a lot of handle space to play with. I will say that the ring on the lock can be a bit annoying/distracting but I can’t think of a way to replace it with something smaller. I briefly considered some type of string or cord, but I fear it would snap should I pull on it too hard.

Anyway, ergonomics are pretty much what you would expect for such a thin zytel handle: relatively neutral and well balanced with no major hotspots. Obviously, I wouldn’t mind more meat, as it definitely doesn’t fill your palm, but realistically, it would add so much weight to the anemic blade that the balance would be thrown off completely. 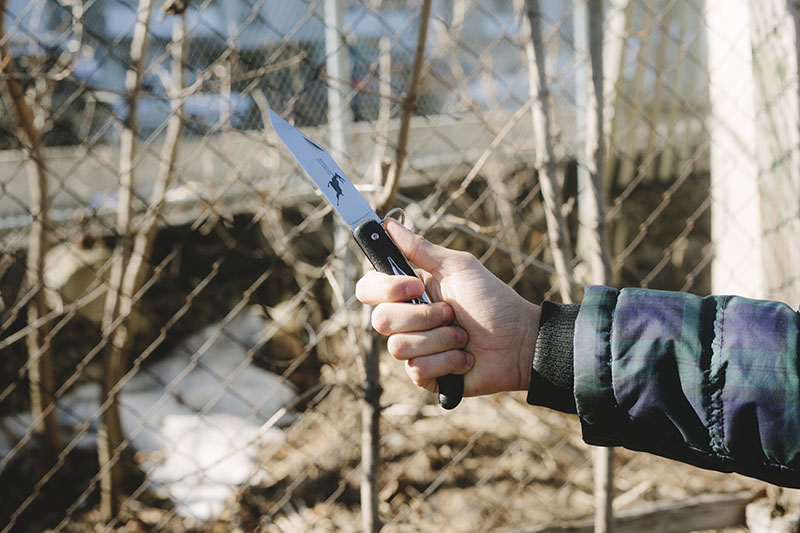 The Cold Steel Kudu’s ridiculous handle size and lack of choils or ergonomic “features” mean you can choke up (or down) pretty much wherever you want. This is great when whittling or cutting a specific material at the same angle for prolonged periods of time. You can grip with the perfect distance relative to the leverage required.

It’s something I appreciate in broomstick-style handles on bushcraft knives like the L.T. Wright Genesis, so it’s interesting to have it on such an inexpensive folder. 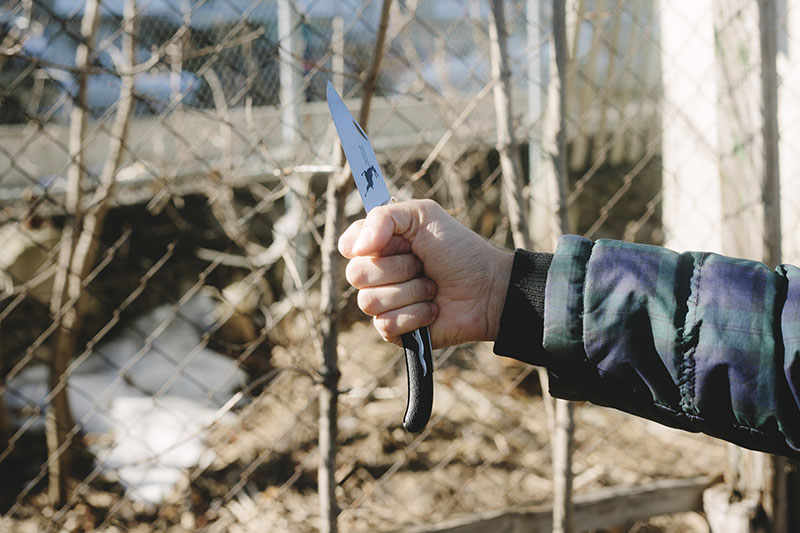 Gripping the butt of the Cold Steel Kudu is interesting, as the knife is so light and balanced you might consider it possibly excellent as a defensive blade for tactical application. As I’ve said, however, its lack of deployment speed and secure grip (no choils) rules it out as a thoroughbred tactical knife, but like most Cold Steels, you can definitely see how much damage this would do in a pinch. Truly impressive amount of reach. 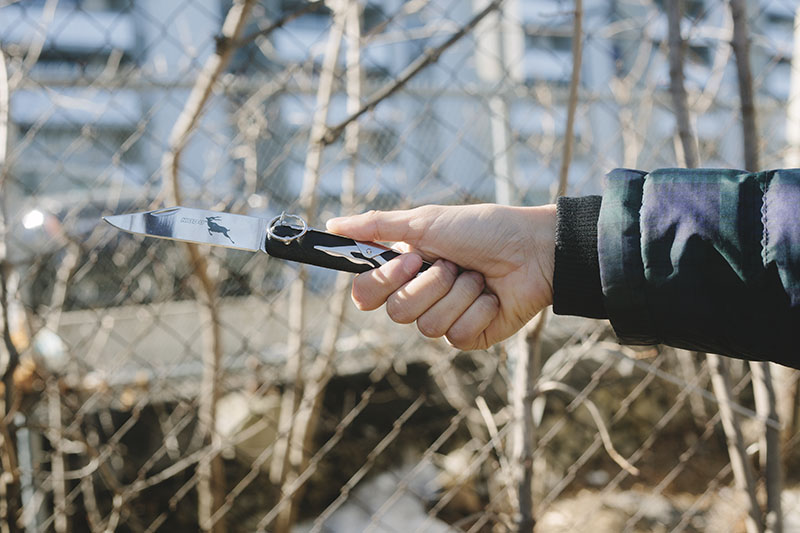 The lack of a choil and any kind of rough texturing means I am not particularly comfortable using this knife in a reverse grip. If tactical knives were defined by size alone this would be one of the best, but unfortunately it’s just not safe enough in terms of in hand retention. 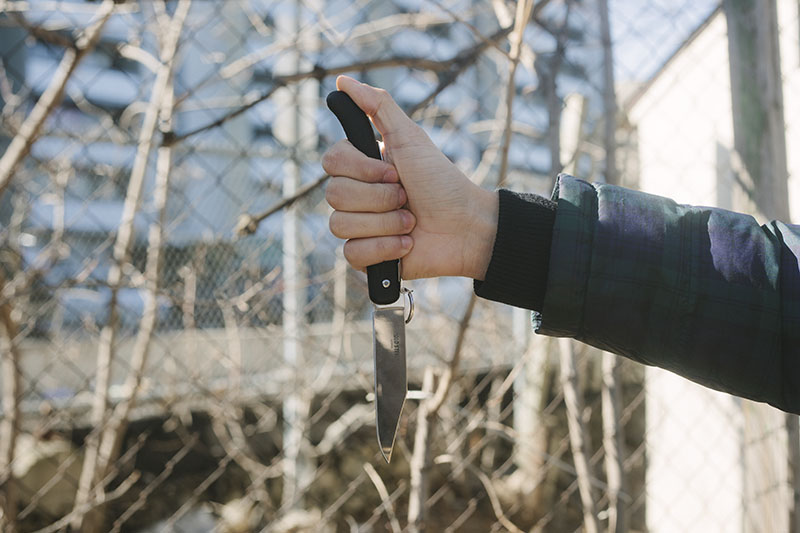 You can really see how thin the zytel scales are. It’s important to note that this lightness comes down to the lack of liners and the super thin blade stock. The Kudu is a beater in price only, as it’s not really built for hard-use like the Benchmade Adamas or Cold Steel Recon 1. 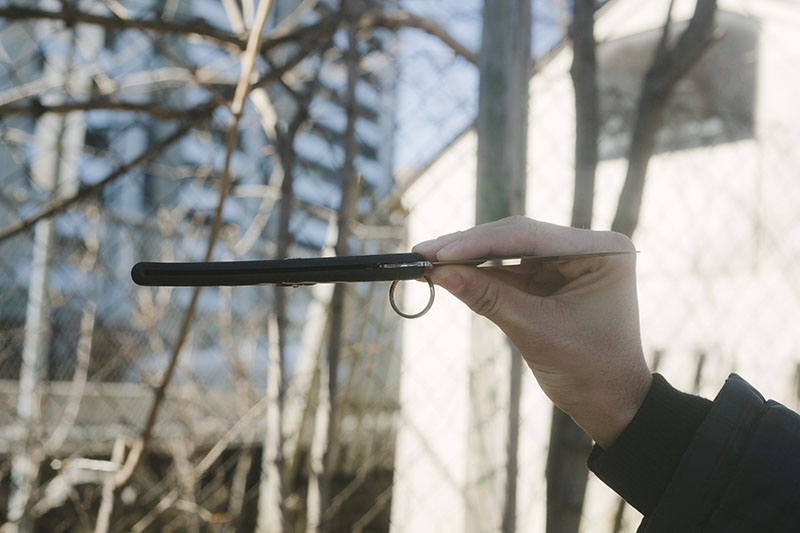 Here you can see the size comparison between an ESEE Izula and the Kudu. I cannot overstate how large the Kudu is in hand. 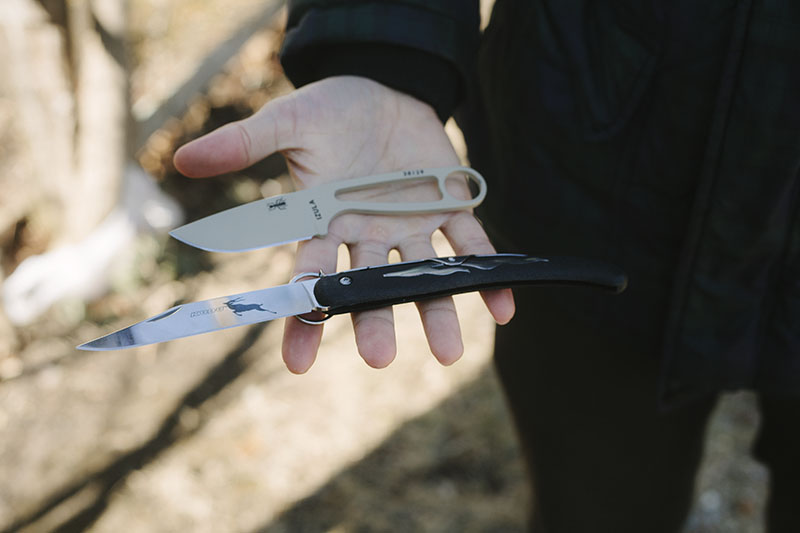 The Zy-Ex scales, which are basically zytel under a different name, have an interesting wood-grain pattern. Should be mentioned that this is purely aesthetic, and doesn’t help much with in-hand retention/grip. 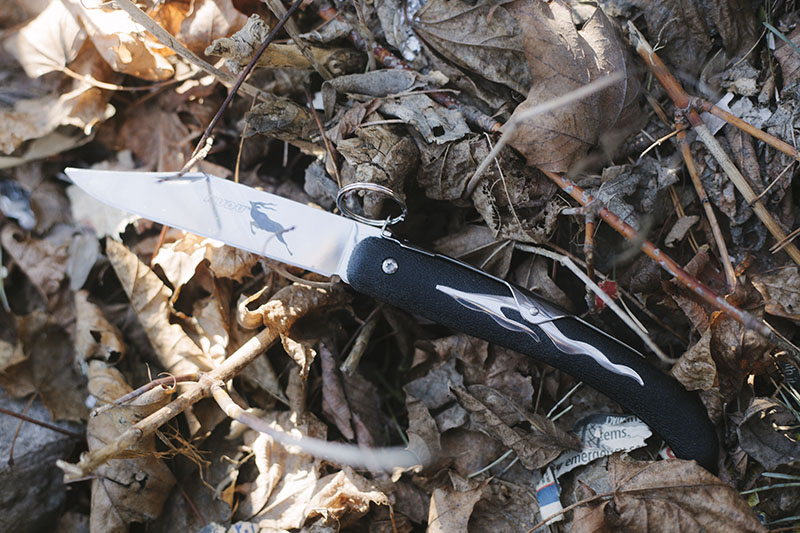 I don’t think I have mentioned taking into account the price as many times in a single review before, but then again, in the Cold Steel Kudu‘s particular case, it’s obviously appropriate. It’s 6. freaking. dollars., and for the cost of a Starbucks (or is it half a Starbucks?) you get 4 inches of pretty good cutting power in a feather-light package with excellent corrosion resistance and an above-average lock.

Yes, it does feel somewhat cheap (because it is cheap!), but functionally? It works well as a cutting tool. As an almost disposable knife to be thrown at the bottom of your bug out bag, I don’t think you could do much better… taking into account the price!

Worried about losing a knife where you’ll be going? Don’t want an expensive knife to be confiscated, stolen, etc., but still want a quality tool: this is what you’re looking for. Buy 3 and you just hit half way to the price of a Spyderco Tenacious. Hell, the Spyderco Bug, which is around a fifth of its size, is more than twice its cost.