A while back, I received a question that asked about the best way to sharpen stainless steel knives, a common problem, especially considering how much easier it is to sharpen carbon steel than stainless steel. Well, it seems a lot of you benefited from that article, and as a result, I thought it’d be a good idea to do a very similar article detailing how one can sharpen ceramic blade knives, since those are even more tricky to sharpen.

Ceramic is basically the black sheep material of the cutlery industry, and whilst many do like using it in the kitchen, I’m not personally all that fond of it myself. If you haven’t jumped the gun and purchased some ceramic knives yet, but are considering it, I’d suggest against it. I describe why in this article, that discusses the pros and cons of using a ceramic blade knife over a steel blade knife. 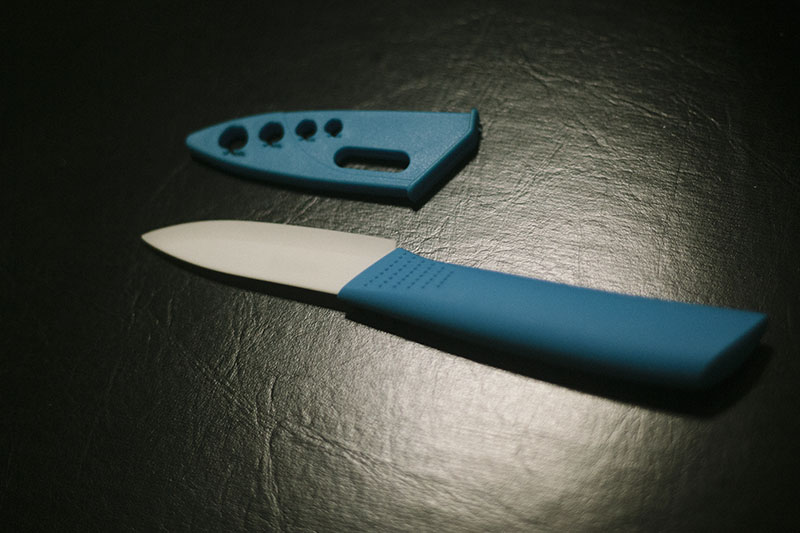 Over the past few years we have been swamped with advertising that equates ceramic as the viable alternative to steel, especially for kitchen knives. Ceramic has been promoted with the incredibly silly marketing promise that it never gets dull: obviously we know this is nonsense. Ceramic (as used in cutlery) is primarily made of Zirconia (zirconium dioxide), which, while it does have some advantages, is by no means a wonder material – a fact anyone who has used ceramic knives firsthand knows.

The main crux of the problem is that, while ceramic looks and feels great, it’s also incredibly brittle, and thus much easier to break than any steel knife you could imagine. With that in mind, when it comes to sharpening a ceramic knife, you absolutely must keep in mind that under no circumstances should you exert too much pressure on the blade laterally. Or it will literally snap in half. I’ll explain this in further detail below, but it’s the one rule to sharpening ceramic you’ll need to remember.

For those who have sharpened blades besides those made of ceramic, you need to keep this rule in mind particularly because you’ll likely be looking for some kind of spring or feedback – like with all the steel knives you’ve sharpened in the past. Ceramic does not give when pressure is applied, much like glass, so don’t expect any level of spring or feedback with these, period. Also, when sharpening ceramic, unlike sharpening steel no burr will be formed because ceramic is not a ductile material. As a result, edge sharpness will ultimately be dependent on the final grit of the edge and how precise your movements are.

What You Should Never Do When Sharpening Ceramic Knives

Now on to explaining that single most important rule further. The picture below is the perfect example of what you should never do. As I said, you shouldn’t be applying too much pressure on the blade laterally, and with this kind of positioning, you may think you are not applying much at all, but it takes just a touch too much and snap – there goes your nearly new ceramic knife. Positioning your hands this way is basically inviting risk – don’t do it. 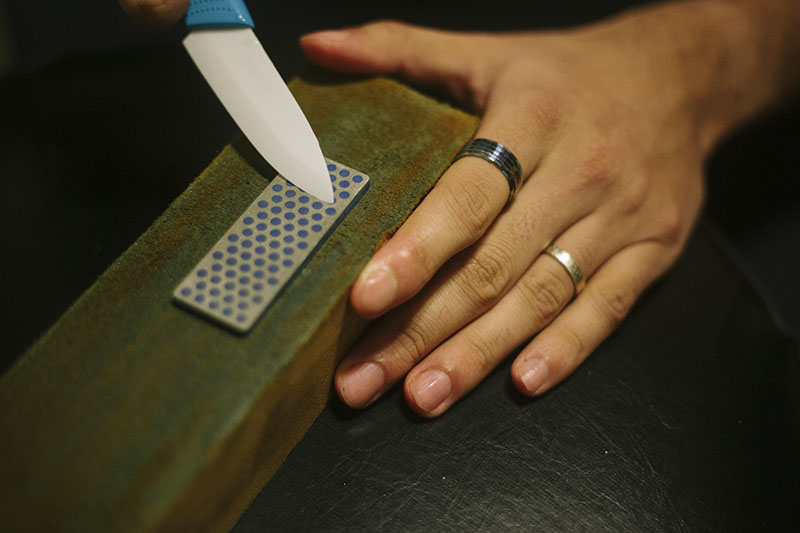 Instead, What to Always Do When Sharpening Ceramic Knives

What I suggest doing instead is positioning your knife with both hands, like in the picture below. Apply light force consistently with your fingers, all the while supporting the blade. Make absolute sure that zero flex occurs, and this will really limit any chance of inadvertent snapping. Needless to say, it’s much easier to control the blade when you’re holding it in your hands this way.

It technically makes no tangible difference if you move your hands up or down when sharpening. I myself favor moving my hands in a downward motion only, but that’s just personal preference. You can go up and down, only up, or only down, and it won’t matter at all to the final result – the knife will get sharp.

Nice and smooth movements and very slight pressure is basically all there is to having good technique. I found that stropping is technically viable, but the amount of effort and care one would have to put into get a mirror polish is simply not worth (it my opinion). I’d definitely stick to the positioning below. 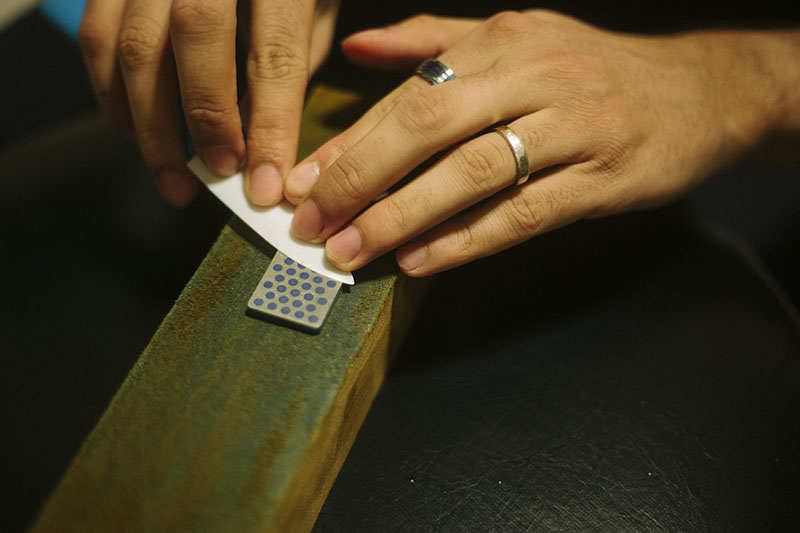 Tools You Can Use to Sharpen Ceramic Knives

When it comes to sharpening tools, I would heavily recommend sticking with diamond stones.

You can technically use other types of knife sharpeners, but diamonds are harder and thus will require far less work to remove material. This means that you can restore your knife’s sharpness of your ceramic blade quickly and efficiently, and you won’t be tempted to apply more force to “speed things along” so to speak.

Many people use traditional waterstones (like these) to sharpen ceramic, and whilst yes, traditional abrasives like sandpaper and waterstones will work, I couldn’t recommend them over diamond stones.

If you feel more comfortable using a proper knife sharpener over loose diamond stones, you’ll want to get your hands on both the Spyderco Sharpmaker and the diamond stone addons.

Why? If you just get the Spyderco Sharpmaker and try to use it out of box, you’re unfortunately probably going to snap the ceramic blade of the knife while doing your best to try getting your knife’s edge sharp. 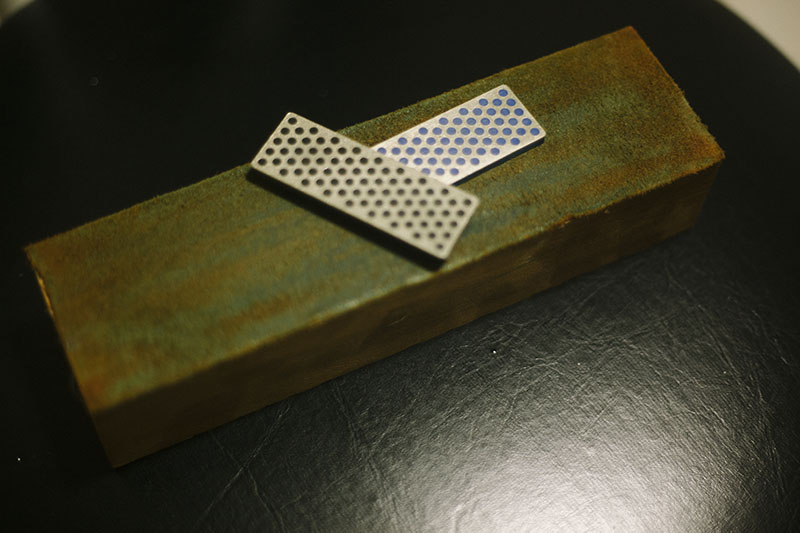 Even though ceramic is definitely not my cup of tea for cutlery, I will say that edge retention will be far above average – the blade will certainly stay sharp for quite a long time so long as proper precautions are maintained when handling the knife. The appeal of a no maintenance knife is very attractive for a lot of people, so if you’re okay with the fragility aspect of ceramic knives, don’t let difficulty sharpening deter you. Grab a diamond stone and give it a shot. You’ll be a pro in no time.

As always, let me know if you have any further questions in the comments!