A small number of posts on this blog have been about knife sharpening; probably nowhere near as much as should be on here considering how knife-heavy our content is, but nonetheless we do have a couple articles:

As well as reviews of the Hapstone Pro & the Smith’s PP1 sharpeners.

Thomas has used many tools to sharpen before – Japanese waterstones, manual systems like the Spyderco Sharpmaker (which we have in Canada but didn’t get a chance to review before we left), sandpaper, DMT stones, and belt grinders. He’s tested the Smith’s PP1, and the Lansky Blademedic for reviews, though he doesn’t ever prefer to use them over other techniques. We actually just got a second hand Worksharp here in the UK as well, so now that’s also a part of his long list of items he’s used to sharpen.

His favourites, I’ll let outline himself:

My favourite sharpening method is using a mechanized platform like a belt grinder or the Worksharp system. I’m just comfortable free-handing steel removal at an aggressive rate and thus, speed and efficiency are my primary concerns. That said, I do quite often use a water stone, which is mostly about the feel rather than the actual performance benefit. As for the belts used, to be specific, I use Trizact belts to set the primary grind, and then go up to a leather belt with a green compound (literally a leather belt that goes on my belt grinder – not a hand strop).

As for me – of course, I use Thomas to sharpen knives ;) 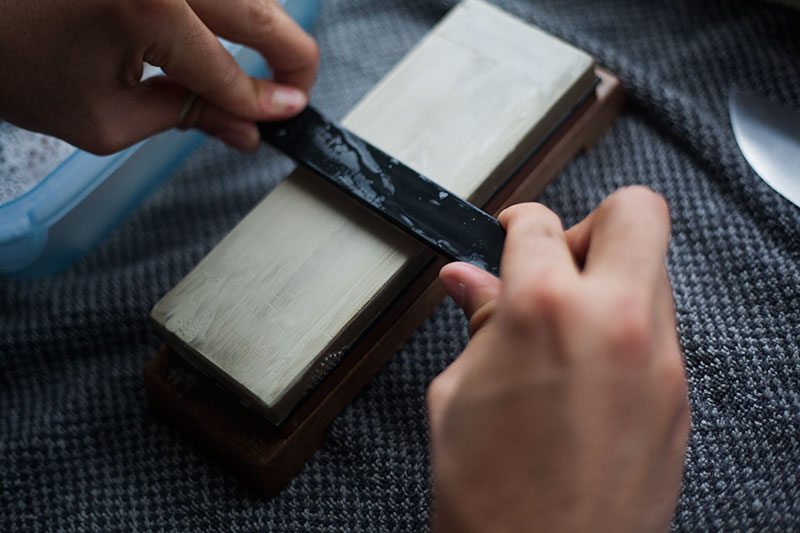 What about you? Do you sharpen your own knives?

Have you tried sharpening before? Do you have a preferred technique? If you don’t sharpen your knives yourself, where do you get them sharpened? If you do sharpen them yourself, what technique do you use most often?

Do you sharpen different knives with different tools? Let me know in the comments down below!