When I heard that Jens Anso and Jesper Voxnaes were the designers behind the Spyderco Pingo, I was ecstatic. I always loved the unique minimalism that Anso and Vox brought to the table and this guaranteed that I would end up snapping this fella’ up.

Sadly (for me) the Pingo fell short of the mark, but this does lay the ground work for a future (better) knife that will fix the ergonomic issues I came across. This is a knife that was obviously designed to carry a certain aesthetic with the ergonomics made around those aesthetic ideals. It’s not a negative, but is something to be aware of. Much like the Spyderco Rock Lobster (also an Anso design), the handle is something you will either love or hate, and I fall under the latter category. 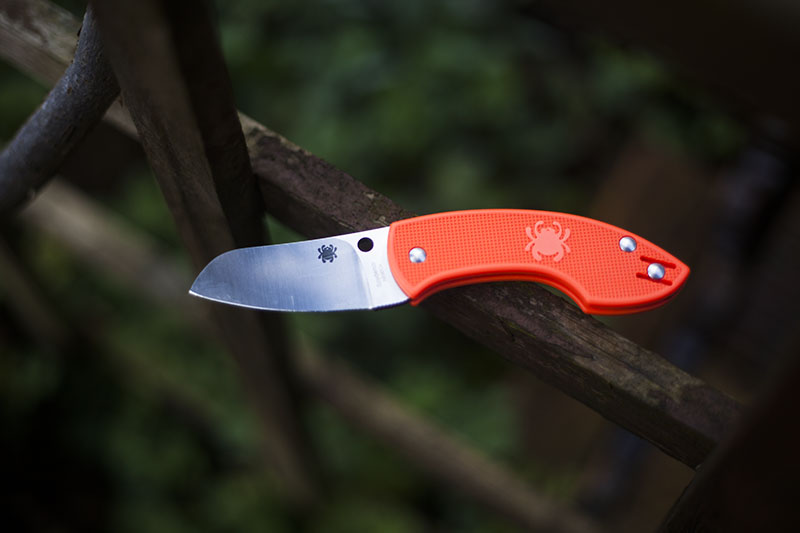 The Pingo is your textbook Spyderco little big knife; it’s a lil’ tyke that has a surprising amount of cutting power in its teensy 2.35 inch blade. I know looking at the photographs you may think the blade is closer to three inches, and I would be inclined to agree if it wasn’t on my desk right now. This is, however, some visual trickery as a result of the fatter overall design. The cutting length of the blade is, I assure you, 2.35 inches.

I find it interesting to handle a knife that looks much bigger than it really is. The Spyderco Pingo is inversely like the Benchmade 940 Osborne in that way. It feels like it should have a much bigger blade in the same way that the Benchmade has a shocking amount of edge for its size.

I can’t say I am a huge fan of having an almost full sized EDC with a smaller blade, but from what I understand this is a knife designed to cater to Denmark’s draconian knife laws, which explains the lack of a lock as well as the cosmetic Spyderhole – Denmark does not allow 1-hand opening knives. Crazy.

Side note: I had zero problems opening this knife with one hand, sorry Denmark. 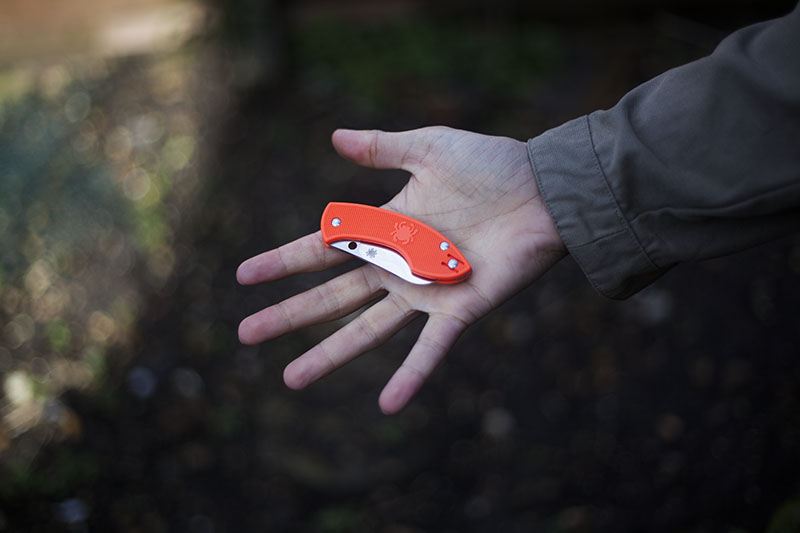 Now, before I overly criticise this knife, I would like to point out that the Pingo isn’t a repeat of the Spyderco Urban I reviewed. The Urban was a poor knife due to fit and finish. This is a solid knife with a great blade, but sadly unworkable ergonomics (once again, for me). I think if it was 1-2 inches bigger or if the handle didn’t have that weird hump, then I would be sold, but then again Elise has zero issues with it, so maybe it’s just my hand.

For reference, I wear size L gloves. Maybe some of you would be okay with it, but sadly I had to pass. 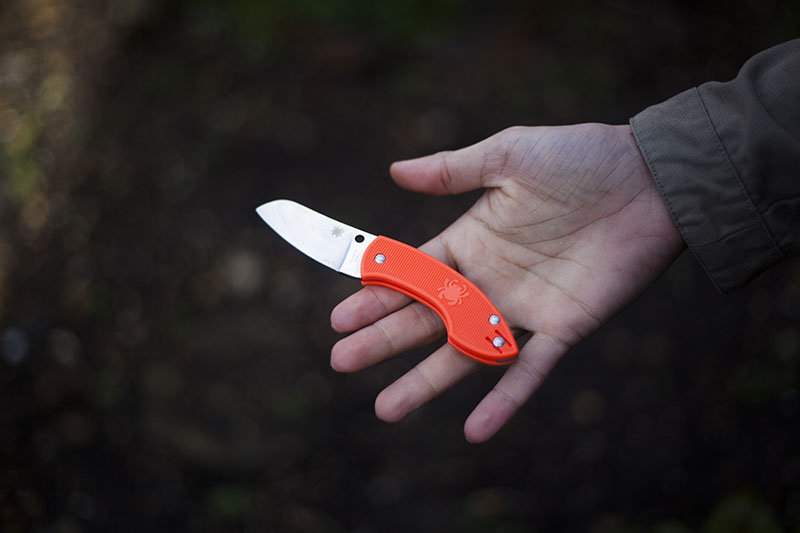 The blade shape is very Anso-like, if you catch my drift. It’s like a shrunk down Rock Lobster and I dig it. Very versatile for all sorts of EDC tasks with no real drawbacks. Sure, it doesn’t have a needlepoint, but I had no issues (day to day) piercing packages and the like. It’s a tough, resilient knife that looks the part, especially taking into account the spine, as you can see below. The N690 blade is (perfectly) full flat ground and keeps a keen edge.

Strictly from a utility point of view, the Spyderco Pingo slices very nicely with no real drawbacks. It’s a legit utility blade with enough belly and oomph to handle rougher work, but with a lean enough transition that you don’t feel like you are cutting with a sharpened wedge. 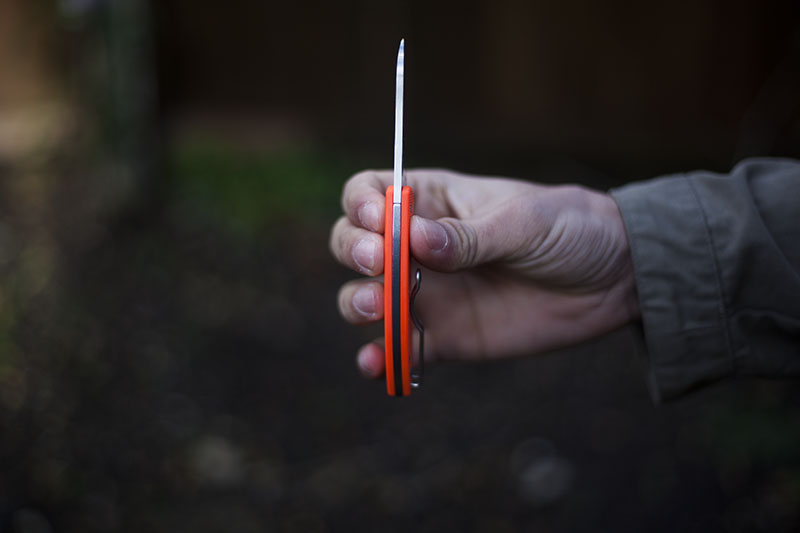 The construction itself is solid. Made in Maniago, Italy, though if this wasn’t laser etched on the blade, I would have a hard time differentiating it from the Spyderco UKPK that is made in Golden, Colorado. In fact, with both knives side by side, I could swear they were made in the same factory. Identical construction and that’s a good thing, as the UKPK is a well machined knife.

Speaking of construction, the slipjoint is rock solid. Once again identical (if not a smidgen stiffer) to the UKPK. I also own the Spyderco Roadie, and that has a much weaker action. In any case, the Pingo’s got a rock solid blade. Unless you exert some serious torque, I simply don’t see the blade folding up “accidentally.” 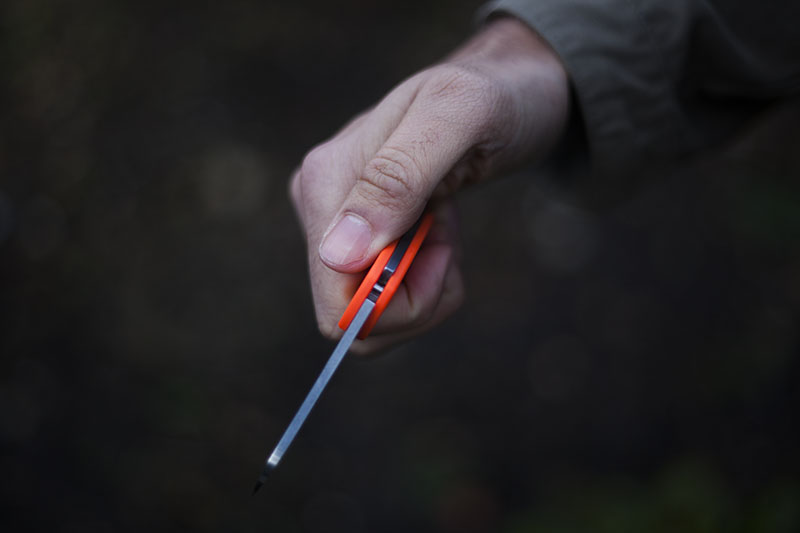 Now onto the nitty gritty. The grip is odd due to this bump on the handles. I understand that the idea is to have a 4 finger grip with your pinkie finger resting over the hump and your pointer finger on the jimping, but that just didn’t feel right for me. I tried people! I really did, but I just couldn’t get comfortable with it and I found myself using the knife with my pointer finger overextended over the spine of the blade like in the photograph below.

Maybe I am the odd one out here, but sometimes, some things just don’t work out and for me the “intended” grip style just didn’t gel well with me in this case. 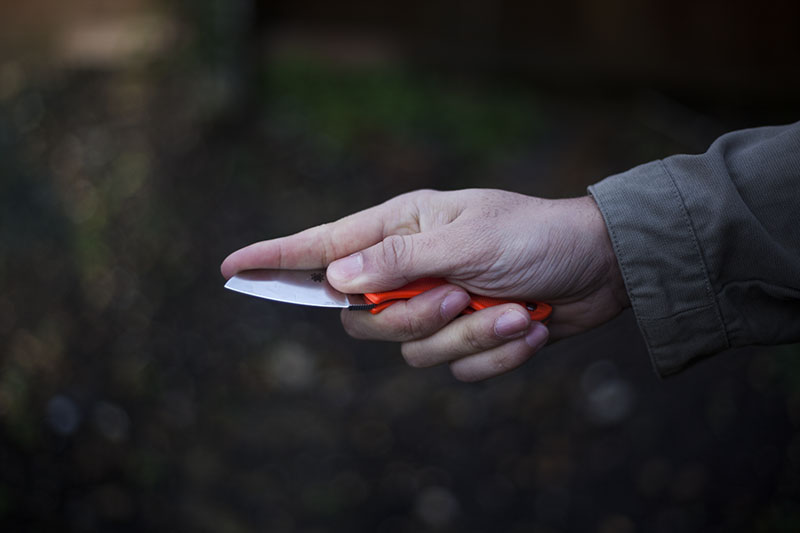 Here’s the thing folks: when it comes to choking up on a knife (like the Spyderco Para-military 2, for example) I want my finger to rest safely on a purpose design choil. Not a ramp (even if it has some jimping). So if I do grip it the way I naturally want to (with my fingers on the handle – go figure!) then the hump jabs into my fingers which forces me to either change grip or use the knife for light EDC. 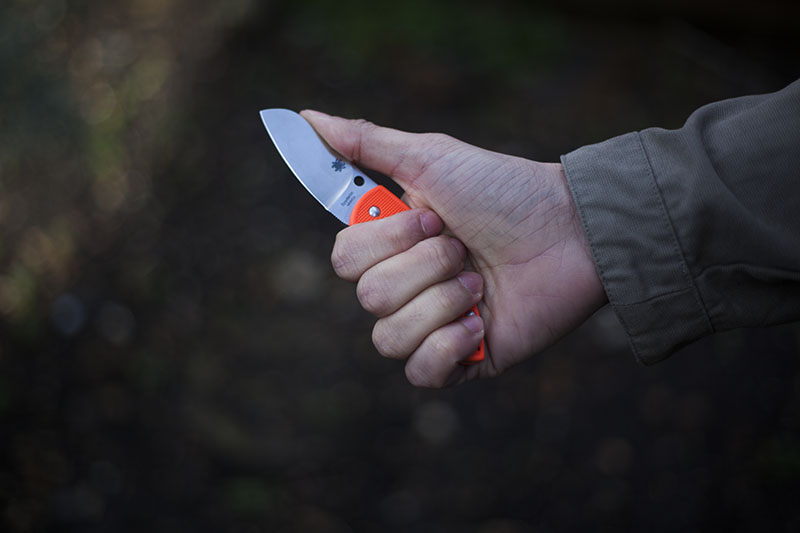 I ended up just using the knife for light EDC. If you are not going to exert pressure then the hump won’t bother you as much. I found the much smaller Kershaw Cinder to be far superior as far as ergonomics go, and it’s a significantly smaller knife. The best Spyderco equivalents with solid ergonomics (for me) would be the Spyderco Dragonfly (if you want a lock) and the Roadie (if you want it to be “everywhere” legal).

I have to emphasize that this is purely my subjective opinion. For some inexplicable reason, Elise loves this lil’ tyke and the moment I am done with this review, it will go into her ever-expanding knife drawer, proving once again that there are always winners where there are losers. 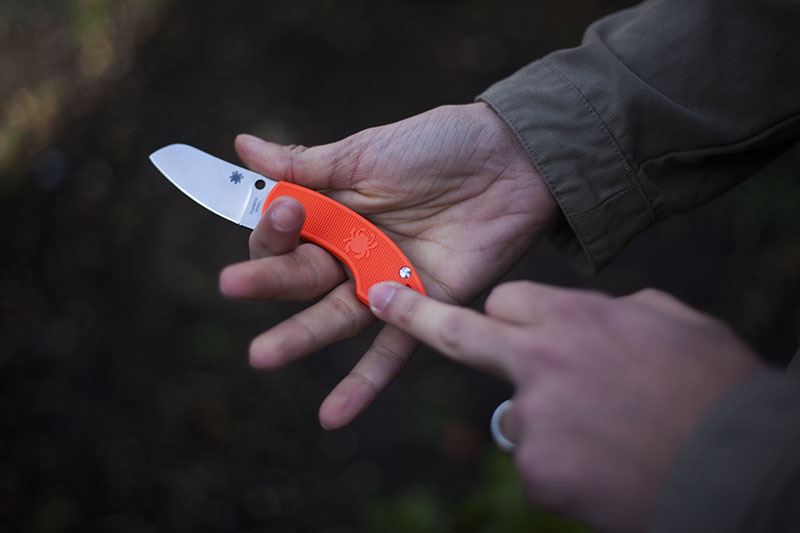 The pocket clip is the standard Spyderco wire clip, which as we all know and agree is the best pocket clip ever conceived (feel free to argue against this in the comments!); so very happy there and as I keep mentioning – it’s the same as the UKPK (interchangeable). As a matter of fact, as best as I can tell, all the hardware is the same. In the pocket, the Pingo is pretty discreet, even if you get a smidgen of orange FRN sticking out. Despite its chunkier design, this is an effortless carry. We are talking about linerless plastic scales here – that translates to sub 2 ounces of real world weight. 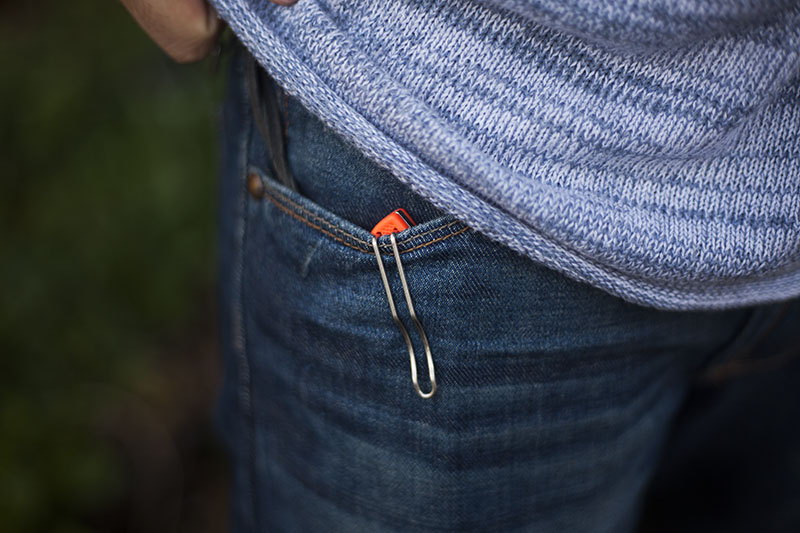 With competitors like the Spyderco UKPK which feature neutral(ish) ergonomics and a more versatile blade, it’s hard for me to look at the Pingo and say it’s on the same footing. This is the sort of knife people buy because it’s different and there is nothing wrong with that. Some may argue that the Pingo is more sheeple-friendly (screw the sheeple, carry what you want!), but frankly at that point you can just carry a Swiss Army Knife like the Pioneer Alox (it rocks), which is far more useful for EDC, with superior ergonomics and comes with a bunch of useful tools.

Or if you want to stick to a Denmark legal Spyderco EDC, then – yet again – how about the Roadie? I own it in blue and I defy anyone to look at it and think it’s a weapon. 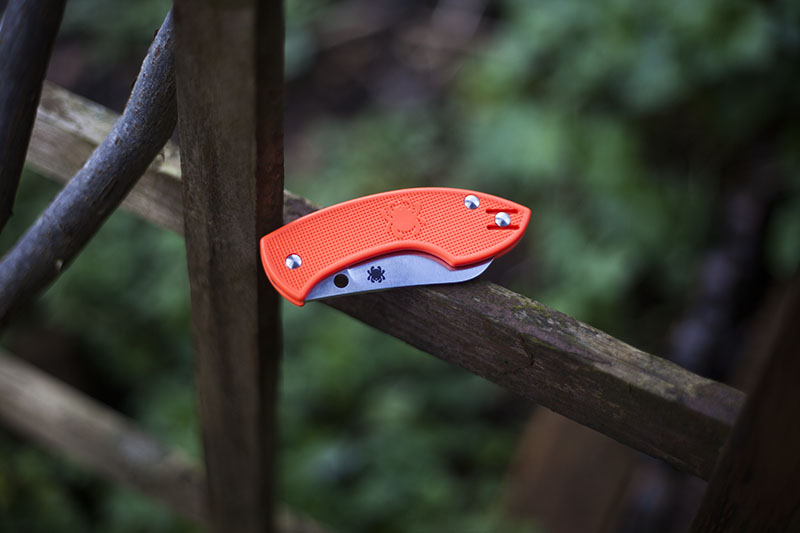 Okay, so obviously I have mixed feelings about this knife. The Spyderco Pingo is pretty darn pretty with very unique aesthetics from two renowned designers as well as solid steel choice (N690Co), all made in Europe with good enough pricing (for a Spyderco).

But with that said, the reality for me is that the weird hump on the handle excludes this knife from my regular EDC rotation. It’s as simple as that and this is a problem because I can’t objectively recommend it even though it ticks all the right boxes. Hell, even the colour is great! Ultimately, though, no carry = no recommendation.

Maybe make a version without the hump Sal? Or add 3 inches to the blade so you can get your full 4 fingers inside the inward curve of the handle?

In either case: take my money Spyderco, I’m waiting.